Fulham showed they are not going down without a fight, and they look to build on the momentum of a stirring victory Saturday at Selhurst Park against Crystal Palace. 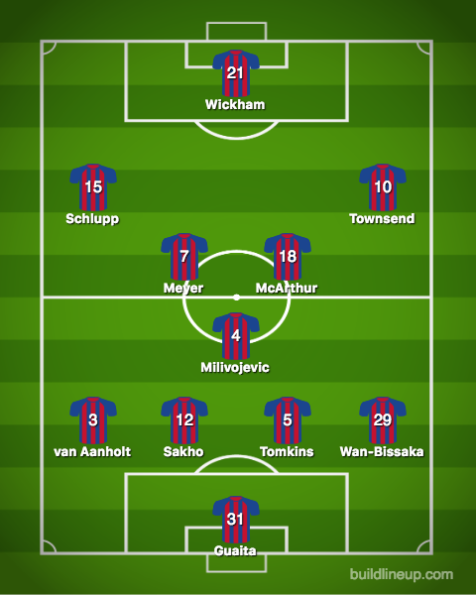 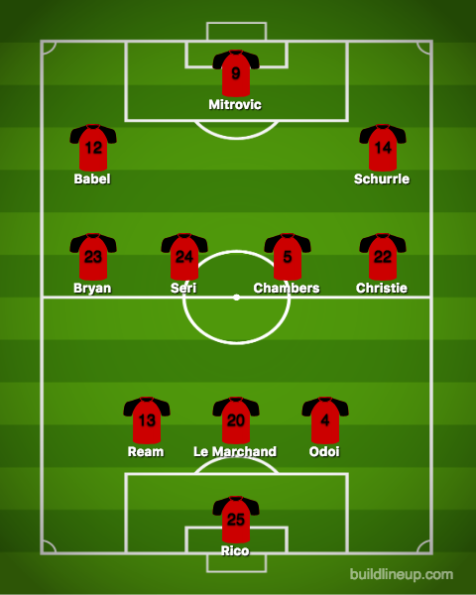 The Cottagers (4-5-15) arguably were left for dead along with last-place Huddersfield Town after Brighton and Hove Albion struck for two goals in the first 17 minutes of Tuesday’s game at Craven Cottage. Aleksander Mitrovic, though, grabbed the contest by the scruff of its neck and fueled a furious Fulham fightback.

The Serbia international scored the equaliser in the 58th minute before giving the Cottagers the lead 16 minutes later. Luciano Vietto added a fourth 11 minutes from time, and while Fulham are still second to last on 17 points, they are now a manageable six points from safety compared to the nine it looked like it was going to be after the first half-hour.

“It’s crucial for us. Every match for us is crucial at this point,” Claudio Ranieri said at his Thursday news conference. “Every match is a battle, every match we have to show our best to stay together and play with the right discipline and try to score goals, without conceding goals.”

Conceding goals has been a huge problem Ranieri has not been able to completely solve since replacing Slavisa Jokanovic. Fulham have shipped a Premier League-worst 53 goals – seven more than the second-worst side – including a staggering 30 on the road while taking just two points from 12 matches outside Craven Cottage.

“Statistics are fantastic because you can see behind you and say, ‘come on, wake up,’ and try to improve the statistic,” Ranieri responded when asked about his team’s road woes. “The (most important) statistic is just at the end of the season. Of course without a victory (away from home) it’s important for us to show another good match. We’ve worked very, very hard these last two days to do our best.”

In a case of addition by subtraction, Fulham announced disgruntled striker Aboubakar Kamara was loaned out to Turkish side Yeni Malatyaspor for the rest of the season. Kamara had five goals in 15 matches across all competitions for the Cottagers, but he incurred the wrath of Ranieri when he refused to let designated penalty taker Mitrovic line up from the spot against Huddersfield Town in December before missing the attempt.

Kamara also had a bust-up on the training ground with a security guard last week, earning a suspension and a banning from team grounds.

Crystal Palace (6-5-13) is the best of three teams on 23 points in 15th place, ahead of Southampton and Burnley on goal difference. The Eagles did not lose any ground mid-week, notching a point with a 1-1 draw at Southampton, but manager Roy Hodgson must do without his top forward Wilfried Zaha after he was booked twice late.

Zaha, who served a one-match ban in December for accruing five yellow cards, was given his yellow cards in rapid-fire fashion in the closing minutes. The Ivory Coast international got his first for confronting Southampton’s James Ward-Prowse after the latter took him down for a challenge. Zaha then mocked referee Andre Marriner by applauding him for the first booking, which prompted Marriner to brandish the second yellow card on 87 minutes.

“It’s disappointing that a player who perhaps provided the most entertainment throughout the game was consistently fouled – that he wasn’t able to contain his frustration with that consistent fouling and complains about a foul that wasn’t given and probably should have been,” Hodgson told The Times. “Then, once he applauds the referee’s decision to give him a yellow card, under the rules he has got no option but to send him off. It’s not a good evening knowing he’s going to miss the next game.”

Zaha opened the scoring of that draw in the 41st minute, ending a 17-match drought that dated to his match-winner against Huddersfield Town on Sept. 15. Hodgson does not lack for striker options to replace Zaha for this match, with Connor Wickham and Christian Benteke the top two choices at the moment.

It is possible Palace will have striker Michy Batshuayi for this match after he agreed to terms on a deal that will allow Chelsea to loan the Germany international to Palace for the season with a chance to make the move permanent. Batshuayi was one of the most-sought strikers before the deadline window closed, with the forward reportedly rejecting loan deals to West Ham and Real Bets, and Chelsea rejecting a rumoured move to Tottenham Hotspur.

Batshuayi had only three goals in 21 matches in all competitions for Valencia this season after totaling nine in 14 for Borussia Dortmund after being loaned there by Chelsea during the January window of the 2017-18 term.

Palace have been a goal-starved outfit this term, with their 24 goals more than only Newcastle United (21), Cardiff City (20) and Huddersfield Town (13). The Eagles have also struggled at Selhurst Park in league play, taking just nine points from 11 matches (2-3-6) while netting a mere six goals.

Palace, though, are going for the league double over Fulham after a 2-0 win in the reverse fixture to open the season. Jeffrey Schlupp opened the scoring late in the first half before Zaha sealed the win on 79 minutes. Palace’s lone double over Fulham came in the South Division Three in 1929-30.

Per Bet365, Palace are 21/20 favourites to pick up a needed three points, with Fulham 13/5 underdogs to claim a second consecutive victory themselves. The odds of the teams splitting the points are slightly ahead of a Cottagers’ victory at 12/5.

Between Palace’s inconsistent offence and Fulham’s leaky defence, oddsmakers are torn on the 2.5-goal threshold for the over/under, offering 10/11 odds on both sides of the fence. They do feel more confident in both teams scoring, offering 3/4 odds compared to even money for at least one clean sheet.

Originally, Zaha was joint-top for first goal-scorer options with Christian Benteke at 5/1, though it seems likely the Denmark international could possibly get stronger play without his suspended teammate. Now, the newly signed Batshuayi and Bakary Saka are joint-first choices with Benteke at 5/1. Mitrovic and Palace striker are both 6/1 options for the opening marker, followed by a trio of Eagles — Connor Wickham (13/2), Andros Townsend (7/1), and Max Meyer (8/1).

Benteke is an 8/5 pick to score during the match, while Mitrovic and Ayew are both 2/1 to bag a goal over the 90 minutes. Wickham is just off their pace at 21/10, again followed by Townsend (9/4) and Meyer (11/4). Fulham wingers Andre Schurrle, Luciano Vietto, and recent signing Ryan Babel all offer a 3/1 return, as does Palace playmaker Luka Milivojevic. Batshuayi has 13/8 odds on scoring over the course of the match.

Behind Chelsea’s signing of Higuain, Palace’s ability to land Batshuayi may have been the second-biggest move of the January deadline. Contrasted against say, the Peter Crouch signing by Burnley, Batshuayi is a high-risk, high-reward signing that may not exactly pull off.

Not having Zaha for this match is going to be problematic because his ability to be unpredictable would have been highly useful against Fulham’s creaky defence. Wickham is a more traditional striker, though he and Benteke could be a curious mix of physical force in the penalty area versus Tim Ream, Maxime Le Marchand, and Dennis Odoi.

At the same time, the Cottagers have their own bull in the china shop in Mitrovic, who has three braces on the season among his 10 goals. One of the only down sides to the Serbian’s two-goal matches is he has failed to score in the match after. Still, Fulham found a more than suitable replacement for Kamara with Ryan Babel, and Ranieri still has Andre Schurrle, Luciano Vietto and teenage starlet Ryan Sessegnon to rotate.

While Burnley vs. Southampton has the potential to be entertaining, this match has the potential to be delightfully sloppy and erratic, with defensive breakdowns and goals aplenty. It is a case of the resistable force of Fulham’s defence versus the movable object of Palace’s offence at home, and this time, the home-pitch advantage might be just enough for the Eagles to claim a needed three points to move further from the drop.