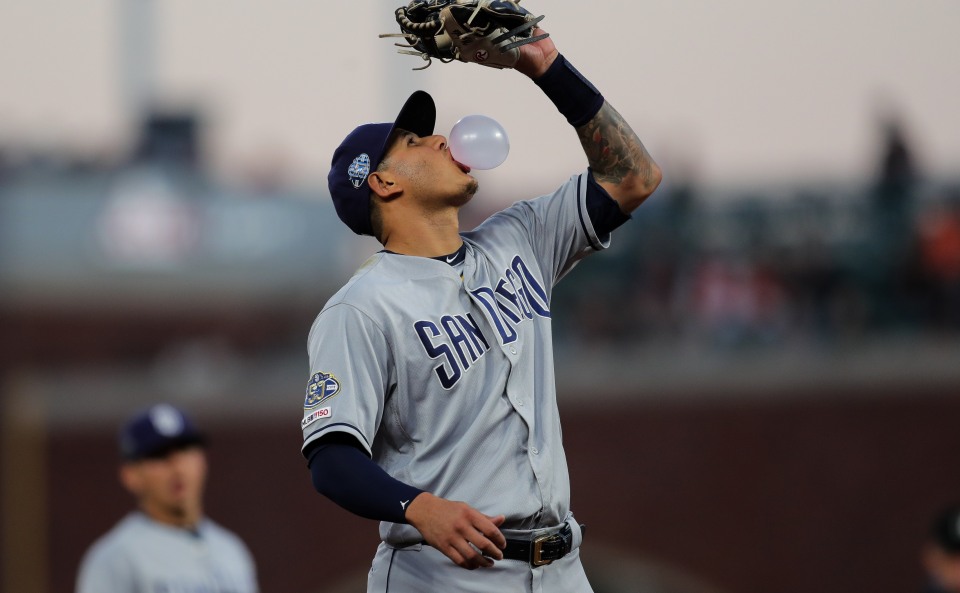 After failing to create separation from one of their closest pursuers in the National League wild-card race, the Chicago Cubs head west to try again as they open a four-game series against the San Diego Padres on Monday night.

Maddon hopes back end of flip-flop pays off with Hendricks

The Cubs (76-66) still hold the second wild-card spot, but in losing the final three games of their four-game series to the Milwaukee Brewers, they allowed the Brewers, Arizona Diamondbacks, and Philadelphia Phillies to grain ground as all three teams are now within two games with 20 to play.

Cubs manager Joe Maddon opted to flip his starters for Sunday and this game, but Jon Lester could not make the decision pay off as the veteran left-hander was rocked for five runs in the fourth and gave up eight runs overall in an 8-3 defeat that cost Chicago a split of the series.

“Other teams have played better than us,” Lester told the team’s official website. “The Cardinals, I think I saw something the other day, they’ve had the best record since the All-Star break. So, they’ve flat-out played better than us. These guys seem to play us extremely difficult. Now, you’ve got the D-backs making a run. Obviously, the Phillies are right there.

“That’s the exciting part about having two Wild Card spots. Now, you’ve got four or five teams involved as opposed to just one. We’ve got to buckle down and play better.”

Already without All-Star shortstop Javy Baez due to a hairline fracture of his left thumb, the Cubs could be without his replacement Addison Russell for this game after he was hit in the head by a pitch Sunday. Kris Bryant is also day-to-day with a knee injury that forced him to miss Sunday’s loss.

It is now on Kyle Hendricks (9-9, 3.39 ERA) to be streak stopper as the Cubs start the second half of their road swing. The right-hander, who grew up 80 miles from San Diego in Newport Beach, had nothing to show for a solid outing last Monday when he limited Seattle to one run in six innings as Chicago rallied after his departure to win 5-1.

The lack of run support was a similar story at home versus the Padres on July 21 when he held them to two runs in seven innings of a 5-1 defeat. Hendricks is still 5-2 with a 2.98 ERA in nine career starts against San Diego, including a 3-1 mark and 3.24 ERA in four at Petco.

Hunter Renfroe is 3 for 7 with a homer and two doubles against the Cubs righty.

The Padres (66-76) regrouped from a four-game losing streak to take the final two games of a three-game set with the Colorado Rockies, capped by Sunday’s 2-1, 10-inning victory. Wil Myers singled home Manny Machado with the winning run.

If you think about it, walk-offs are the ultimate "ight Imma head out." pic.twitter.com/GMxYcOkx6k

“It’s definitely exciting,” said Myers, who went 6 for 9 in the final two games of the series, to the team’s official website. “It was nice to be able to do that for the team and for the fans. We played a good all-around game.”

Myers carries an eight-game hitting streak into this contest, going 13 for 24 with three homers and two doubles.

Padres rookie Cal Quantrill (6-6, 4.57) is hoping history will repeat itself as he goes for a second win versus the Cubs. The right-hander had one of his best outings of the season as a bulk reliever in that July 21 matchup with Hendricks, scattering two hits in 5 2-3 shutout innings.

Quantrill’s form the last two starts, however, has come nowhere near that performance of late as he has been rocked for eight runs in each of back-to-back losses to the Los Angeles Dodgers and Arizona as part of a three-start skid. Quantrill is also 3-2 with a 4.44 ERA in nine home starts.

Quantrill’s recent form makes the over the play here; it is too much to trust a faltering rookie, even with the Cubs looking for sources of offense. The over has been trending against San Diego at home of late, going 8-3-1 in the Padres’ last 12 at Petco Park against right-handers and 12-5-1 in its last 18 at home overall.

This line has ticked higher to 8.5 runs closer to first pitch, so shop around and see if anyone is offering the 8-flat because the high-side hook could make a huge difference in this contest.

The hedge is Hendricks gets the job done here with Quantrill struggling to find a rhythm. He will need to be good, though, as the Cubs are scuffling offensively and without Baez for possibly the remainder of the season.

A pro-Hendricks pick as much as anti-Quantrill one, with the Padres 2-6-1 at the midway point in their last nine home games and 2-4 in Quantrill’s last six starts. San Diego was also 0-2-1 in the three-game set at Wrigley in July.

Hendricks was on the mound for the stalemate in that July series, and while the Cubs are 2-4-2 after five innings in the righty’s last eight starts, they have failed to back him with any runs in five of those outings.

Quantrill’s previous two outings remove any thoughts of aggressively making this pick, though he did pitch well against the Cubs in July. Hendricks has helped Chicago to the five-inning under in nine of his last 12 starts (9-2-1), including the Wrigley matchup versus San Diego.

Quantrill has allowed a run in the first three innings in each of his last four starts and was tagged for six by Arizona last time out. The Cubs have pushed across at least one run in the first three frames in five of their last seven road games and totaled eight in the three games versus San Diego earlier this season.