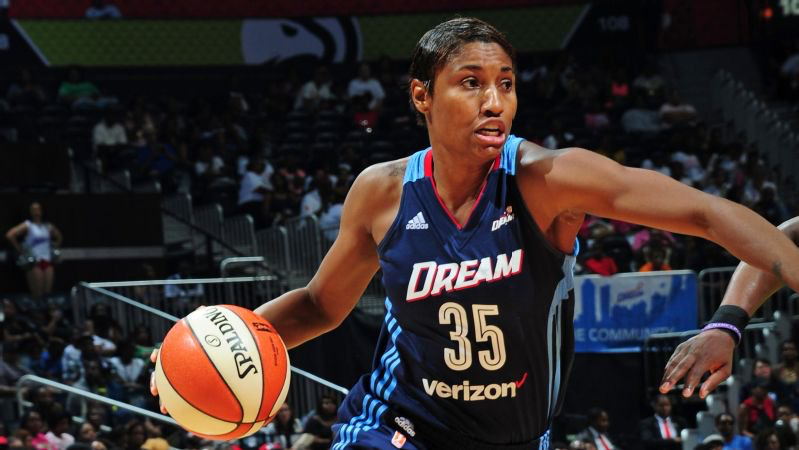 Having secured the top odds in the WNBA draft lottery, the New York Liberty look to salvage some pride in their season finale against the Atlanta Dream on Sunday and avoid finishing last in the 12-team league.

The WNBA weighs its lottery on a rolling two-year record, and the Liberty (9-24) clinched having the worst record in that span following their 86-81 home loss to the Indiana Fever on Friday night. Tina Charles scored 19 points and Maria Johannes added 16 for New York, which has gone 16-51 since the start of last season and is looking to avoid closing this year on a seven-game skid.

“If we get the first pick then yes that’s the silver lining for losing tonight,” Liberty coach Katie Smith told The Associated Press. “I would have rather won the game.”

Whomever New York selects after the lottery will join 2019 No. 2 overall pick Asia Durr as another building block. Durr, though, has been ruled out of this contest and will have missed the final 12 games due to a strained groin. She averaged 9.7 points while shooting 46.7 percent in 18 games.

The Liberty have dropped 14 of their last 15 overall and will finish with losing records in back-to-back seasons for the first time since 2013-15.

Atlanta (8-25) can technically finish ahead of New York with a victory in this game since it would give the Dream a season series victory. Guard Angel McCoughtry was hoping to make an appearance in the season finale as she continues to recover from a torn ACL suffered late last season, but she was not cleared to play and instead will only suit up in what the team is calling a “ceremonial aspect” of the game.

“She met with a doctor yesterday, but let me be clear, Angel is not cleared to play basketball,” Dream coach Nicki Collen told High Post Hoops in late August. “She’s not close to being cleared. She wants to put on a Dream uniform and step on the court, and so, I respect that and respect her wanting that. This is certainly us being grateful for what Angel does bring to the table. This is an opportunity for her to get on the court, if that’s the route we go, but she’s not cleared to play.”

The Dream sorely missed McCoughtry, who averaged 16.5 points and 6.0 rebounds last season in helping them to the second-best record in the league. Atlanta has struggled all season offensively but put those issues aside for a surprising 78-74 victory over playoff-bound Las Vegas on Thursday night.

Elizabeth Williams had 20 points, eight rebounds, and a career-high eight blocks for the Dream, who got nine points from Renee Montgomery and Alex Bentley in a decisive 11-2 fourth-quarter burst. Atlanta has split its last six games following a 12-game losing streak.

The Dream snapped that skid with a 90-87 road victory over the Liberty on Aug. 23, with Montgomery hitting a go-ahead layup with 15.8 seconds to play and finishing with 19 points.