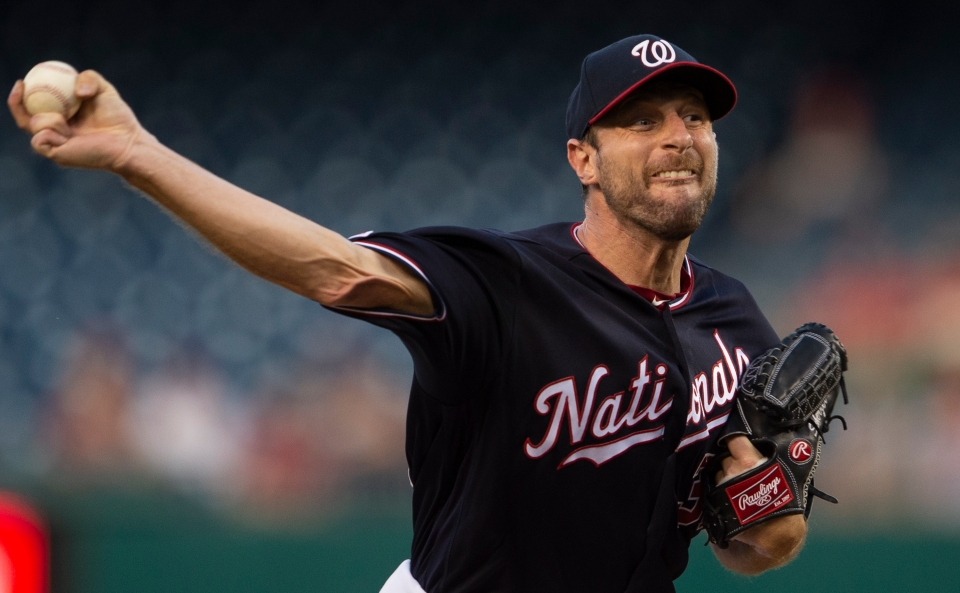 While the Washington Nationals have won all three games Max Scherzer has started since coming off the injured list, he has not won any of them. The three-time Cy Young Award winner looks to rediscover his groove Sunday in the series finale versus the NL East-leading Atlanta Braves.

Is Scherzer set for stretch run?

Scherzer (9-5, 2.60 ERA) has neither thrown more than 90 pitches nor lasted more than six innings in his three starts since recovering from a strained rhomboid. A lesser concern is that the right-hander has yielded a home run in each outing while giving up seven runs in 14 1-3 innings in those starts.

Scherzer had one bad inning Tuesday versus the New York Mets, serving up a two-run homer in a four-run fourth that accounted for all the offense against him over six innings before the Nationals pulled out an 11-10 victory. The righty is 3-3 with a 2.98 ERA in nine starts against division rivals this season heading into his first appearance against the Braves and has struck out 79 in 57 1-3 innings.

Max Scherzer said earlier that he expects to be full intensity for around 100 pitches against the Braves tomorrow. Another step closer to being his normal self, if all works out.

Scherzer has not fared all that well at SunTrust Park since is 2017 opening, going 2-3 with a 4.18 ERA in five starts there and losing the last two while getting tagged for 11 runs in nine innings. He is 9-7 with a 3.87 ERA in 20 lifetime starts versus Atlanta after going 2-2 with a 3.19 ERA in five matchups last year.

Freddie Freeman has two homers and five extra-base hits off Scherzer but is 7 for 34 (.206) lifetime against him. Nick Markakis is 19 for 63 (.302) with six doubles while also striking out 13 times, and Ronald Acuna is 4 for 9 with a double and a triple.

Soroka trying to power through September for Braves

Technically a rookie, Mike Soroka (11-3, 2.53) appears to be hitting the wall as he crossed the 150-inning threshold in his last start and has not shown the same effectiveness he had earlier this season.

"To be able to go head-to-head with him Sunday, a guy that has deserved and won Cy Youngs before and arguably deserves it again, that's going to be pretty cool to match up against him."

Soroka, though, did end an eight-start winless drought Monday versus Toronto, shaking off a pair of solo home runs and allowing three runs in five innings of Atlanta’s 6-3 home win. The 22-year-old is 5-2 with a 4.02 ERA in 11 starts but has posted a 5.36 ERA in his last seven outings at SunTrust, giving up three or more runs in six of them.

The right-hander is 0-1 with a 3.00 ERA in three starts against Washington, with one start cut short after taking a comebacker off the shin. Soroka had a no-decision in the nation’s capital July 31, conceding only a solo homer to Juan Soto and two other hits over seven innings as Atlanta’s bullpen squandered a three-run lead before winning 5-4 in 10 innings.

Soto and Trea Turner have given Soroka fits, going a combined 7 for 14.

A confidence pick in Soroka given his divisional dominance as well as the Braves in general as they seek a 10th straight win. Atlanta has held teams to three or fewer runs in his last three starts and in 16 of its last 19 games overall.

The under has trended strongly behind both pitchers, going 4-0-1 in Scherzer’s last five road starts and 5-1 when he takes the ball in the fourth game of a series. The under is also 8-0 in Atlanta’s last eight matchups with pitchers owning a sub-1.15 WHIP and 5-2 in Soroka’s last seven starts.

The under is also on a six-game run in Atlanta between the teams and 8-1 in the last nine overall. It is also 3-1-1 in Scherzer’s last five road starts versus Atlanta.

Soroka’s form against NL East opponents — he is 4-1 with a 2.47 ERA in 11 such starts — and Scherzer’s middling form at SunTrust make the NL East leaders the pick here to cut their magic number for clinching the division title to nine.

There is always the chance Scherzer could become the Scherzer from June and mow down the Braves, but Soroka has been up to the challenge all season and keeps finding ways to be effective as his inning count continues further into unchartered territory.

The Braves are 8-0-1 at the five-inning mark during their winning streak and 9-1-1 in their last 11 at home. Atlanta has also led at the midway point five times in Soroka’s last eight starts (5-2-1), and the hedge is the one mistake Scherzer has been prone to since his return winds up being a difference-maker that gives the Braves the lead.

A bit against the grain given the low number, but the five-inning under has gone 8-2 in the last 10 meetings between the teams and has delivered all series long as the teams have not cracked three runs combined in the first five. Soroka had a six-start run with the under end in his last outing, while the under is 1-2 in Scherzer’s thee starts since his return.

A case of taking what the defense gives you as the quality starting pitching should continue with Scherzer and Soroka in this contest. The teams have not cleared three runs combined in the first five innings in this series, and the hedge is that the full Scherzer is going to be unleashed Sunday while Soroka goes about his usual business.