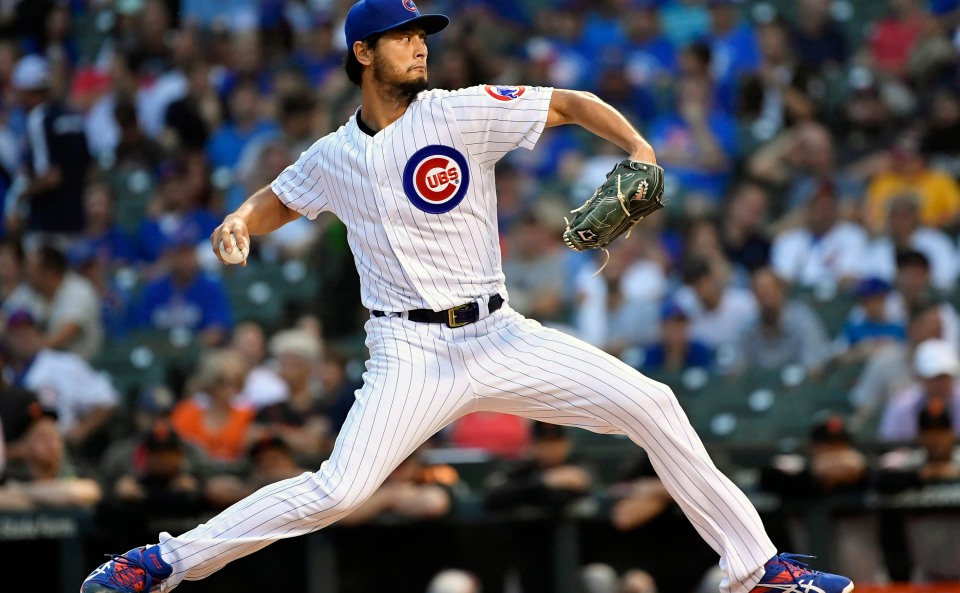 Yu Darvish looks to extend his recent mastery of the Milwaukee Brewers as he leads the Chicago Cubs into the third game of a key series between the NL Central rivals.

Darvish back after missing turn with forearm stiffness

Darvish (5-6, 4.25 ERA) has ranged from flashes of being near-unhittable to starts where he can’t keep the ball in the park throughout the season, which has been maddening for both him and the Cubs.

The right-hander missed his last scheduled turn in the rotation due to stiffness in his right forearm — the first time he missed a start all season after injuries limited him to eight appearances in 2018. Darvish is looking to post back-to-back wins for the first time with Chicago after limiting the New York Mets to a solo homer by Pete Alonso and little else over eight innings of a 5-2 victory Aug. 27.

“This started July 3 at Pittsburgh, around the sixth inning,” Darvish said. “Every time in the fifth, sixth inning, it would start getting tight and that’s why Joe (Maddon) would pull me.”

The only time Maddon has had to pull Darvish in his three starts against Milwaukee since the start of last season was due to situational baseball — the right-hander has limited the Brewers to three runs — two of them solo homers — in 17 innings while striking out 25. He broke through for a victory in the most recent outing, conceding a solo homer to Christian Yelich over five frames while striking out eight in a 7-2 victory Aug. 4.

Yelich has taken him deep twice while going 3 for 10 in their matchups.

Cubs shortstop and 2018 NL MVP runner-up Javy Baez will miss his fifth straight game with a jammed left thumb following a head-first slide last Sunday. He was scheduled to undergo an MRI on Saturday.

Despite not making his season debut with the Brewers until late April, Gio Gonzalez (2-2, 4.14) will have had a turn in all the series between the NL Central rivals he possibly could as he faces them for the fifth time in 2019.

Gio Gonzalez, with Jordan Lyles Aug 23: Second season where two Brewers starters have been removed from a game (at any point) with a no-hitter intact. Other was two years ago, Jimmy Nelson and Chase Anderson, and the latter only threw 8 pitches before an "oblique injury".

The left-hander is 1-0 with a 1.40 ERA in his previous four starts against the Cubs, limiting them to a .154 batting average over 19 1-3 innings while striking out 18. Gonzalez’s outing versus them Sunday was cut short due to situational baseball, with Brewers manager Craig Counsell lifting him for a pinch-hitter after three hitless innings with four walks to try and sustain a fourth-inning rally up 1-0.

The rally fizzled out but Milwaukee did win the game 4-0. The Brewers are 3-1 in Gonzalez’s starts versus Chicago this year, and the veteran southpaw is 4-3 with a 2.67 ERA in 14 career matchups with the North Siders. Gonzalez has served up only four homers over 81 innings in his career.

Ex-Brewer Jonathan Lucroy is 8 for 13 with a double in their matchups, but Anthony Rizzo has failed to solve Gonzalez — he has two singles compared to eight strikeouts in 30 at-bats.

This line moved down from its opening at 9.5 runs, which admittedly would have made a much more convincing play for the under than the 9-flat. Still, the under has trended well for Darvish, going 4-1 in his last five starts and 8-2 in his last 10 on the road versus above-.500 teams.

The under has hit in all four of Gonzalez’s prior starts versus the Cubs this year and entered Friday night’s contest 6-1-1 in Milwaukee’s last eight overall.

A confidence pick in both pitchers to bring the goods in this matchup, with the five-inning under 6-2-1 in Darvish’s last nine starts and 6-2 in Gonzalez’s last eight outings for Milwaukee. The under has also hit in all four of Gonzalez’s matchup with the Cubs this season.

It is difficult to trust the Cubs on the road on a game-to-game basis, but even coming off having their six-game road winning streak snapped Friday night, the hedge is Darvish gets the job done here.

One interesting side note will be if Maddon opts to sit Kyle Schwarber, who has just one at-bat against Gonzalez. Schwarber’s .236 average against left-handers is barely below his .239 mark on the season, but the slugger is 6 for 16 with three homers in lefty versus lefty matchups in the last 10 games.

A better play than taking the half-run at -130, the Cubs are 4-2-1 at the midway point in Darvish’s last seven starts and should have some early life to his pitches after the extra rest from missing a turn in the rotation. The right-hander has also pitched the Cubs to a five-inning lead in his last two road starts and had a lead in his previous outing versus Milwaukee.

A scoreless first is worth a play here since Gonzalez has not conceded an opening-inning run to the Cubs in his four starts this year, and Darvish has emerged unscathed in his last eight road starts.