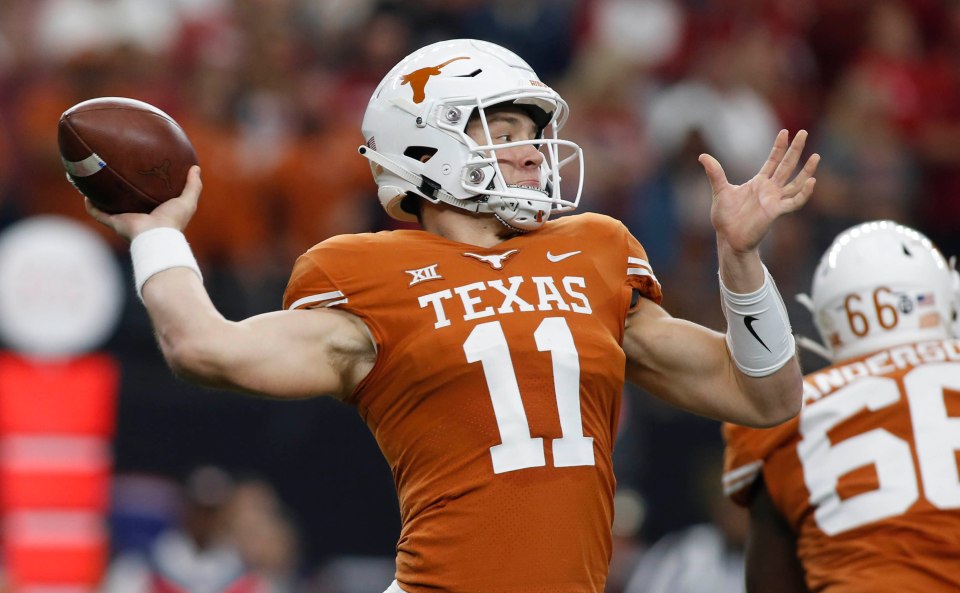 The Longhorns made steps of progress under second-year coach Tom Herman, reaching the Big 12 title game and defeating Georgia in the Sugar Bowl en route to their first 10-win season since 2009 when they lost to Alabama in the National Championship game.

Ehlinger is the main reason for raised expectations in Austin, and with good reason. He threw for 3,292 yards and 25 touchdowns while completing 64.7 percent of his passes as a sophomore and is a dual threat — Ehlinger also ran for 16 scores and 482 yards. He lost top wideout Lil’Jordan Humphrey to the NFL, but Collin Johnson is primed for bigger things after totaling 65 receptions for 985 yards and seven TDs in 2018.

Ehlinger and Texas will have to be good offensively since the defense is replacing nine starters, and the Longhorns must also be wary of looking ahead to their showdown at versus No. 6 LSU at home Sept. 7.

Louisiana Tech has been to a bowl game five straight years under Skip Holtz and is looking to contend for the Conference USA title. J’Mar Smith has arguably the league’s best receiver in Adrian Hardy, who totaled 75 catches for 1,145 yards, but the senior QB threw for only 15 touchdowns last year while totaling 3,160 yards.

Tech looking to beat ranked foe for first time since 2005

Louisiana Tech has never beaten an AP Top 10 school in program history since making the jump to the FBS level in 1989, going 0-20 in such contests while going 3-37 against ranked teams dating back to 1996. The Bulldogs’ last win over a Top 25 opponent was a 40-28 upset at then-No. 23 Fresno State in 2005, and they have lost 17 straight games against ranked opponents.

Much has changed for Willie Baker since his breakout Hawaii Bowl outing.

A look at how he prepped for a position change & how his role will increase in @LATechFB's defense this season.

Smith is entering his third season as Bulldogs starter under center, and while Hardy is easily his favorite target, the senior quarterback could have a dependable No. 2 wideout in Isaiah Graham, who sat out last season after transferring from TCU. Graham saw limited action with the Horned Frogs, catching eight passes in his two seasons, but Holtz is expecting big things from the junior.

“When I look at the full 70 travel list, I think it’s a mix of a lot of experience with a lot of new faces who by the end of this season will become very familiar with Louisiana Tech fans,” Holtz said at his media availability Tuesday. “You look at guys like Isaiah Graham who sat out last year after transferring in from TCU. He’s going to be a very important piece for us outside this year and make an immediate impact.”

The Bulldogs may be using a running back by committee approach since 2018 leading rusher Jaqwis Dancy (667 yards) and Justin Henderson are listed behind Israel Tucker on the depth chart. Tucker finished second on the team with 377 yards last season, but Louisiana Tech struggled at times on the ground and finished with 129.6 yards per game and 3.8 yards per carry.

Former UConn coach Bob Diaco is the new defensive coordinator and has brought a 3-4 defense with him to Ruston. He has two all-Conference USA preseason selections at cornerback in Amik Robertson and L’Jarius Sneed, who recorded seven interceptions between them in 2018. Sneed, though, is moving to safety with redshirt freshman Bee Jay Williamson while Michael Sam slots into Sneed’s old spot.

Fellow newcomer Trey Baldwin, is expected to start at inside linebacker while there will be a pair of converted outside linebackers as defensive end Willie Baker will be one side and safety James Jackson on the other.

“I’ve seen a lot written about Texas being back and a consensus top 10 team, so we know what type of opponent we’re playing right from the get go,” said Holtz. “I think coach Herman has done a great job with this football team. I think it’s good for college football when Texas is winning. They’ve got an incredible tradition and history, and I’ve got nothing but respect for that program.

“I know what type of challenge we have in front of us. It’s a great challenge, great opportunity, and something our players and coaches are really looking forward to.”

Ehlinger has never lacked for confidence since stepping onto the Longhorns’ Austin campus, and by season’s end, that confidence translated into winning performances. He completed 66.5 percent of his passes for 1,475 yards and 12 touchdowns against three interceptions in his last six games, and when he couldn’t get the passing game going, Ehlinger would take to effective scrambling and had three rushing TDs in the Sugar Bowl.

#Farrell50: #Texas #Longhorns QB Sam Ehlinger is No. 16 on @rivalsmike's list of the 50 best players in College Football!

“He came in as a freshman and every single snap he got under his belt, he just got more and more confident and more of a complete quarterback,” Johnson told USA Today about his quarterback. “When he talks, people will listen. That’s a very powerful trait. That’s one of the most important things a quarterback can have is power in his words, and people listen.”

Johnson is expected to be the beneficiary of Ehlinger’s year-on-year improvement, which should also lead to more steady production by the senior wideout. While Johnson did finish 15 yards shy of 1,000, he also failed to record at least five receptions in back-to-back games over Texas’ last five contests. Texas will be thin at receiver since Joshua Moore has been suspended for at least this game following his arrest for unlawful carrying of a weapon earlier this month.

For the opener at least, the lack of depth at running back could be a concern. Sophomore Keaontay Ingram and freshman Jordan Whittington are right now considered the only two game-ready in terms of injuries and third string quarterback Roschon Johnson is getting reps at the position as a contingency. Ingram is the team’s leading returning rusher with 708 yards on 5.0 per carry, and Herman resisted the urge to add freshman slot receiver Jake Smith into the mix since he is expected to be Texas’ punt returner.

The lack of bodies at running back is one concern for the Longhorns, all the new bodies on defense is another. Texas is replacing eight starters on that side of the ball, including both starting cornerbacks. One of the potential fill-ins, Anthony Cook, must sit out the first half of this contest for a targeting penalty given in the Sugar Bowl.

Sophomore Caden Sterns is expected to anchor that group, while senior defensive end Malcolm Roach will provide leadership to the front seven. Roach, who totaled 24 tackles in nine games last season, thinks the Longhorns will surprise opposing offenses with their speed at all three levels.

“I think we’re going to be a special group just because of the way we can run,” he told Burnt Orange Nation. “We got a lot of fast guys on our side of the ball. We can run very well at all positions. There’s a few things we’ve got to work on, but just the way we picked up everything so fast… we’re out there like a mature group already.”

Grabbing the low side of the hook is pivotal on this play because the lack of bodies in the backfield behind Ehlinger means he will have the ball in his hands a lot, whether passing or running. That bodes well in taking the Longhorns, with the expectation Ehlinger will make life miserable for Louisiana Tech on the edges against its new 3-4 set-up.

The worry is the back-door cover given the Bulldogs have an experienced quarterback-receiver combination in Smith and Hardy, but if Texas’ defensive speed is everything Roach claims to be, the Longhorns can defuse that threat while Ehlinger has a big all-around day and begins making his 1-2 punch with Johnson noteworthy at the national level.

This band provides the greatest margin of error for Texas’ young defense while maintaining the expectation Ehlinger will have a big game. Getting Sterns for the second half could prove valuable in the Longhorns putting this game out of reach since he would likely cover Hardy upon his entrance.

This one has the feel of a toss-up because no one really knows how the Longhorns are going to kill off the clock without a go-to running back behind Ehlinger. It may mean Herman keeps playing a live-drive offense even with the outcome beyond doubt, which plays into taking the over.

The hook prevents an aggressive play, but the expectation is Ehlinger and the Longhorns are able to move the ball consistently against Louisiana Tech and get to a two-touchdown lead. Texas has outscored Group of 5 opponents 42-0 at home in the first half of its two games under Herman, and while a shutout may be asking too much, a two-touchdown lead is not.

Another conservative play because of the hook while retaining confidence in Ehlinger and the Longhorns to at least get to 21 points. The Bulldogs also scored 14 or more points in five of their eight road games last season, and if they get to 10 in the first half of this contest, the over should hit.