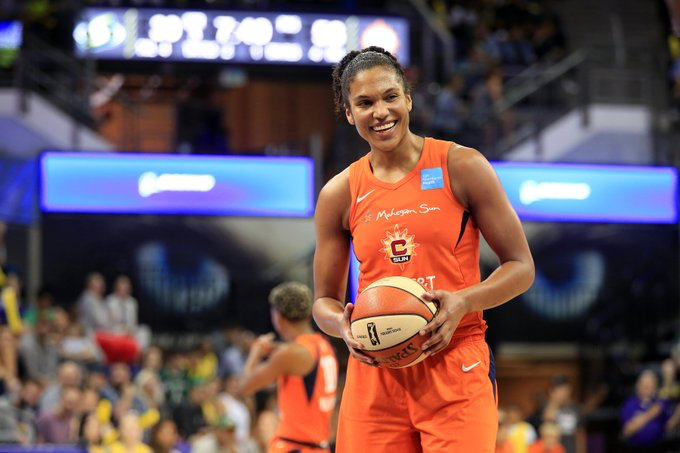 The Connecticut Sun look to keep the pressure on the Washington Mystics in the race for the top seed in the WNBA playoffs Friday night when they face the New York Liberty.

Connecticut (21-9) is one game behind Washington – which is at Dallas on Saturday – with four games remaining but holds the head-to-head tiebreaker. The Sun are looking to wrap up a three-game road swing with a winning record after using a big third quarter to race past the Storm 89-70 on Tuesday night.

Alyssa Thomas had 22 points and 11 rebounds for her seventh double-double and scored nine during a game-breaking 21-9 burst that provided Connecticut a 20-point lead. The Sun can assure themselves of no worse than a fourth-place finish with a victory in this game since they also hold the head-to-head tiebreaker over Las Vegas.

“It’s a huge road win for us on a night where 3, 4, and 5 all lose,” Sun coach Curt Miller told the team’s official Twitter account, referring to pursuers Los Angeles, Las Vegas and Chicago. “Great energy from start to finish … 89 points on the road, not a lot of 3s, not a lot of foul shots, and a lot of 2-point baskets and outscored them by 40 in the paint.

“I was really happy with our aggressiveness to get the ball in the paint off the catch, off the dribble all night long and that led to good things.”

Thomas has averaged 15.3 points and 9.8 rebounds while recording three of her double-doubles in the last six games. All-Star center Jonquel Jones continues to be the only player in the WNBA averaging a double-double at 14.4 points and 10.1 rebounds but only had three boards Tuesday night – partially because Connecticut shot 52.9 percent.

New York (9-21) has lost three straight and 14 of 16 following a 95-82 home loss to Phoenix on Tuesday night. Amanda Zahui B. and Bria Hartley scored 18 points apiece for the Liberty, who were worn down in the paint by Mercury center Brittney Griner as she totaled 29 points and 14 rebounds and torched from the outside by Leilani Mitchell, who also had 29 while hitting 5 of 6 from 3-point range.

The defeat mathematically eliminated the Liberty from the playoffs for a second straight year – just the second time in franchise history they have missed the postseason in back-to-back years (2013-14).

“As a professional athlete, you want to go out there and play on the biggest stage and you want to play in the playoffs,” Hartley told New York Newsday. “So it’s definitely tough.”

Connecticut is looking to sweep the season series and record a fourth consecutive victory overall against New York. The Sun cruised to 94-79 road win in the most recent matchup Aug. 4 behind a season-high 28 points from Courtney Williams.