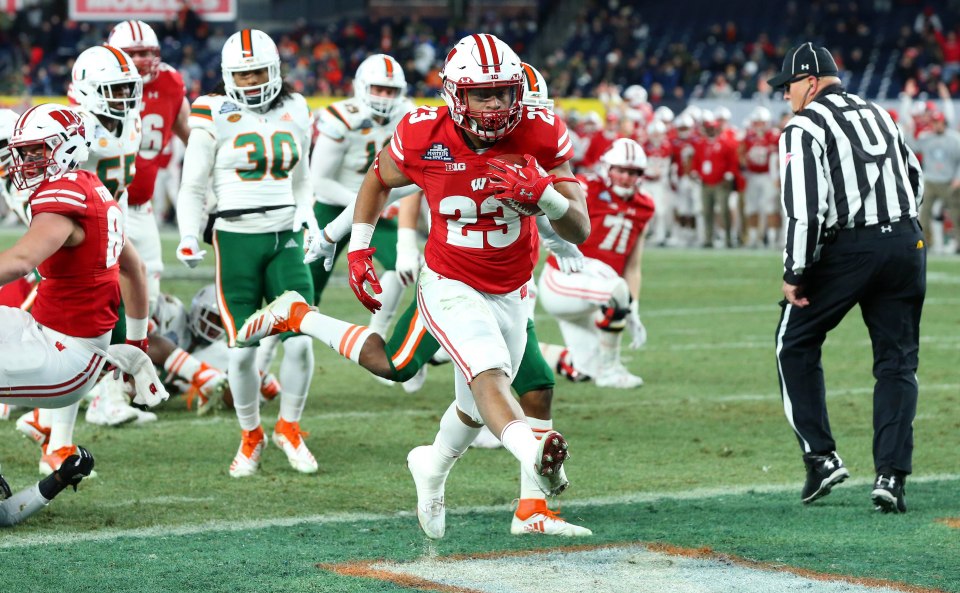 Everyone knows who is running the ball for Wisconsin.

Whether Jack Coan becomes a recognized name like Jonathan Taylor in college football could go a long way in determining success for the 19th-ranked Badgers as they open the season Friday night with a tricky contest at South Florida.

Taylor enters his junior year with 4,171 yards after amassing a school-record 2,194 yards to go with 16 touchdowns last year. He was been held below 100 yards just five times in 27 games for the Badgers and only once in 13 last season en route to leading all FBS rushers by nearly 300 yards.

Wisconsin, though, is counting on the emergence of Coan to improve upon an 8-5 season in which it finished a distant second to Northwestern in the West Division of the Big Ten. Coan threw for 515 yards and five TDs over parts of five games last season and fended off a challenge from highly regarded freshman Graham Mertz for the starting job.

South Florida was a tale of two drastically different teams last season. The Bulls won their first seven games — cracking the AP Top 25 at No. 21 in late October — before losing their final six and getting beat by Marshall in the Gasparilla Bowl.

New offensive coordinator Kerwin Bell arrives with an impressive resume, having guided Valdosta State to the Division II title last year while averaging 52 points. He will try to get more out of Blake Barnett, who threw for 2,710 yards but only 12 touchdowns with 11 interceptions.

Though Wisconsin has played higher-profile season-openers at neutral sites against LSU and Alabama and recent years, this is the first time the Big Ten school will play a true road game to start a season since beating BYU 40-6 in 2017.

Taylor is again the hub of the offense, having finished sixth and ninth, respectively, in Heisman Trophy voting in his first two seasons. He may find things tougher in the early going as the Badgers will have four new starting lineman flanking center Tyler Biadasz, though many consider are tipping left tackle Cole Van Lanen to have a breakout season.

Taylor shattered fellow Wisconsin running back and Heisman Trophy winner Ron Dayne’s FBS record for most yards (3,566) in his first two seasons and is eager to close the gap on Dayne’s staggering four-year total of 7,125 established from 1996-99.

He's even got @SweetFeet_White all like 🤯🤯@Jayt23 broke Adrian Peterson's freshman rushing record with 1,977 yards

Then he had zero chill and went and rushed for 2,194 more

“We’re chasing those guys that are on the wall,” Taylor told Madison.com. “They set a standard. If those guys came through this school and just set a mediocre bar, then a lot of people would be able to pass that bar.”

Making progress into that sizable gap will come quicker if Coan has a firm grasp of the offense. Coan started in the Pinstripe Bowl win over Miami, which led to previous starter Alex Hornibrook transferring to Florida State. Coan’s job could become much easier if wide receiver Quintez Cephus is able to quickly reintegrate back into Wisconsin’s offense.

Cephus was cleared to play earlier this month after being acquitted on sexual assault charges but missed all of last season and the final five games of 2017 with a leg injury. In his sophomore season, Cephus totaled 30 receptions for 501 yards and six touchdowns in nine games.

“He looks great,” Coan said of Cephus. “For someone who hasn’t played in a year and a half, it’s amazing. He’s going to be really great.”

Defensive coordinator Jim Leonhard will be plugging in an entire new defensive line, with hopes Garrett Rand is fully recovered from an Achilles injury that caused him to miss last season and Isiahh Loudermilk will remain healthy after missing four games in 2018. Chris Orr and Zack Baun provide experience at linebacker, and a young secondary that took its lumps last season should be improved and led by cornerback Faion Hicks and safety Eric Burrell.

Update: Three tight ends will be out in this game. They include Luke Benzchawel, Clay Cundiff and Hayden  Rucci. Benzschawel was expected to be the No. 2 tight end and the primary blocker but had a leg injury early in camp. The only true tight end they have is walk-on redshirt freshman Jack Eschenbach.

Bulls bracing for Taylor, hope to get offensive going

Strong and his players are well aware of the challenges that come with stopping Taylor, with many of them taking notice watching game tape of him running through Miami for 205 yards while Wisconsin finished with 333 on the ground in that 35-3 victory in New York.

“I mean, he’s so fast,” said USF outside linebackers coach Sean Cronin to the Tampa Bay Times. “You don’t see a guy who’s that big and that fast.”

While the Bulls lost converted linebacker Khalid McGee to graduation, they are hoping Nico Sawtelle can step into that spot and stay healthy, but that will not happen in this contest since he has been ruled out due to the shoulder and neck injuries suffered last season.

He missed the last seven games with shoulder and neck injuries, and the effect was noticeable as South Florida allowed 39.3 points and 489.7 yards per game during its season-closing six-game skid.

South Florida’s offense could help the defense by sustaining drives, something that was a problem down the stretch. In the last four games, the Bulls averaged only 18.5 points — well off their season mark of 28.5 per contest — and 312 yards. That is where Bell comes in, with Strong giving him complete autonomy of the offense, a key selling point in the former Florida Gators quarterback coming to Tampa.

“We’re a system-driven deal in that we’re gonna try to get people open,” Bell explained at the time of his hiring in January.

“And we’re gonna go fast enough to try to keep the defense as simple as we can, so they don’t have time to really give us all these exotic looks. So you want to go fast enough to do that, but you don’t want to go so fast that you’re getting out-numbered in the run game or your protections aren’t holding up.”

All of that sounds promising provided Barnett can operate the offense. The senior is at a school for a second season for the first time in his career, having been at Alabama and Arizona State previously, and he feels the continuity has provided him a chance for big things.

“I am more comfortable in my surroundings as far as with my team because I know I am better, I know how they play on the field, I know how they react when they are upset,” he told Forbes. “But I am not comfortable in terms of feeling lackadaisical, by any means. This is the first camp I have gone into where I am the starter, so I have tried to stay persistent in competing every rep, making sure that I do the best that I can to help this offense.”

The Bulls have lost five straight non-conference games to ranked teams since winning 23-20 at No. 16 Notre Dame in 2011.

Run, do not walk, but run to the window to get this line before it becomes a flat seven or even gets the hook above it. Giving less than a single touchdown with a Heisman Trophy finalist against a defense missing its leader is worth a full play, especially when it comes to Taylor and a Wisconsin offensive line that doubles as road graders.

Though it is a rare non-conference road game, Chryst’s team has taken care of business on the road when expected to win. The Badgers are 14-1 on the road against unranked opponents since he arrived in Madison in 2015, and seven of those victories have come by 14 or more points.

The obvious key is Taylor as Wisconsin will likely keep it simple for Coan and try to wear down the South Florida defense via the run — something that could be made easier with Sawtelle’s absence.  The Badgers may have an inexperienced offensive line in terms of returning starters, but they have become a factory in cranking out NFL-caliber players at those positions who know what Taylor does best.

Sawtelle’s absence looms large and adds to the pressure on South Florida’s offense to keep this close. How Bell’s offense performs is anyone’s guess, though the unfamiliarity for Wisconsin in facing a spread-style offense the Bulls will play could work in their favor.

But the line is the key here at less than two touchdowns. If Taylor gets going early, this could be a long day for South Florida, and if Wisconsin figures out how to defend the Bulls early, it could get even longer. Having this line come down from 12.5 ahead of kickoff strengthens confidence in this pick.

Wisconsin played to under 50 points in five of its last six non-conference games over the past two seasons, and that includes the 46-point total in the win at BYU in 2017. The Badgers will try and control the clock through Taylor and their ground game, but the flip side is if South Florida’s offense struggles in terms of Barnett’s accuracy, that is more clock for Wisconsin to chew through and potential for Taylor to break off scoring plays.

South Florida’s defense was awful down the stretch last season, and Sawtelle’s absence makes things tougher. Oklahoma State graduate transfer Patrick Macon steps into Sawtelle’s spot, but it is a big ask to replace the effectiveness in his first game with the team. This number will be close, but the longer Wisconsin can keep South Florida’s offense off the field, the better the chances are for the under to deliver.

Every extra half-point helps when taking the under, and so it is here as the hedge is the Badgers fluster South Florida enough offensively to keep them in the teens while scoring in the low to mid-30s. Wisconsin averaged 31:26 in possession overall last season and at least 34 minutes in all three non-conference games.

Taylor’s big-play potential makes this somewhat of a toss-up pick for the overall number, but that should be the only thing being sweated out here since Wisconsin should cover handily.

The two points on top of a fourth touchdown makes this feel like a bridge too far, especially if South Florida’s offense struggles out of the gate and misses connections. The Badgers also took a while to crank up during non-conference play last year and were held to 14 or fewer in two of the three contests while totaling 27 or fewer in combined points in all three contests.