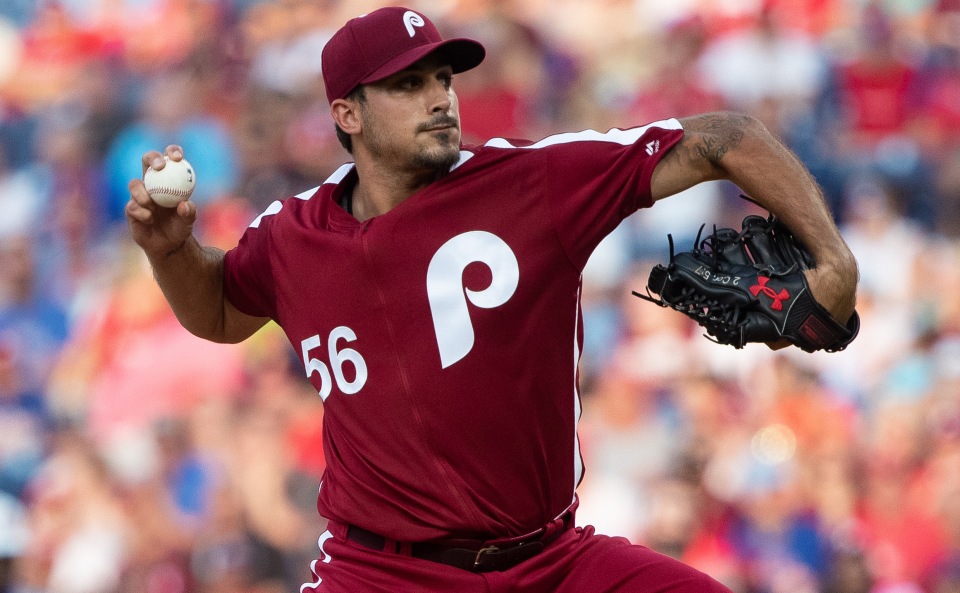 Zach Eflin looks to improve his pitch-making and give the Philadelphia Phillies a quality start Saturday night when their intradivision series against the Miami Marlins continues.

Eflin has mixed results in return to rotation

Eflin (7-11, 4.57 ERA) is back in Philadelphia’s rotation out of necessity after Jake Arrieta was lost for the season last week due to a bone spur in his elbow that will require surgery.

Zach Eflin and Nick Pivetta’s struggles have put the Phillies in a tough spot. @JohnStolnis breaks down their disappointing 2019 seasons. https://t.co/4wkSxSyImP pic.twitter.com/xIteOHd7iW

Primarily a sinker-ball pitcher, Eflin has been trying to work within the constructs of Philadelphia’s pitching philosophy that wants hitters swinging at high fastballs. In his return to the rotation last Saturday, everything appeared to be going according to plan as the right-hander cruised through the first three innings.

The fourth, however, was a different story as the Padres chased him with three consecutive two-out hits — two coming with two strikes — that erased a three-run Philadelphia lead. Eflin did not register a decision as Philladelphia eventually lost 5-3.

“They were big,” manager Gabe Kapler told NBCSports Philadelphia about those killer two-strike hits. “We want to be able to put people away whenever we can. It’s difficult. We want to execute pitches in those situations and give ourselves a chance to stay in the ballgame.”

Eflin sounds like a pitcher trying to find a comfort level with what he can do and what the Phillies want. With Arrieta sidelined, it would take something substantial to knock Eflin from the rotation, but at the end of the day he wants outs like everyone else.

“I care about outs and going as deep as I can in games and putting the team in the best possible chance to win the game,” he said. “I think swing and misses are a plus when you can do it. I’m not saying they’re not important, but I think it’s definitely more important to get guys out with fewer pitches as opposed to just going for the swing and miss every single pitch.”

Eflin his 1-1 with a 4.74 ERA in three starts versus Miami, highlighted by a seven-hitter in a 5-1 victory April 28. He has yielded nine runs in 10 innings in two starts in South Florida this year and is 0-2 with a 7.29 ERA in four career starts there.

Yamamoto out to regain winning touch for Fish

After bursting into the major leagues with four wins and a 1.59 ERA over his first six starts, Marlins rookie Jordan Yamamoto (4-4, 4.31) has encountered little but misery since. The 23-year-old has gone 0-4 in his last six starts, posting a 7.34 ERA while getting tagged for 10 home runs in 30 2-3 innings.

He got off to a historic start to his major league career. He continues to be so hard to hit and so easy to root for.

The right-hander did show signs of improvement in his last outing Sunday, holding the Rockies to a pair of solo homers and two other hits over 5 2-3 innings and leaving with a lead. Miami eventually lost the game 7-6 in 10 innings, but the rookie was pleased with his outing.

“It just goes to show what the future of this pitching staff holds,” Yamamoto said after recording season highs of nine strikeouts and 17 swinging strikes. “We’re happy as a staff with what we accomplished this weekend. It could’ve gone better, but it could’ve been a lot worse.”

Yamamoto dealt with control issues more than the long ball in two starts versus Philadelphia six days apart in late June, walking eight in nine innings. He did record a victory June 23 after yielding two runs in five innings but was reached for four runs — two earned — in Miami’s 9-6 win June 29.

Even with the line ticking one-half run higher in response to Friday’s slugfest, the over is still a clear play. The Marlins have fared well at home versus Eflin, and the over improved to 5-2 in Miami in the season series. The over also is 9-0-1 in Miami’s last 10 home games.

Though Eflin appears to be of two minds pitching in terms of what he can do and what the team wants him to do, those potential issues are secondary to the fact the Marlins entered Friday night’s series opener with three runs in their last three games.

Additionally, it is difficult to ascertain if Yamamoto pitched better because the Rockies are a free-swinging team or he made adjustments. Giving up two home runs in Coors Field is normal, but it offers no clues if the mistakes that led to the eight he yielded in the five starts prior will crop up again.

And after Friday night’s fiasco in which the Phillies frittered away a seven-run lead, there is an urgent need to bounce back and stay in the thick of the wild-card race and within touching distance of the Washington Nationals.

A surprisingly low number given the early fireworks from Friday night, especially with a pair of pitchers trying to find their ways out of slumps. The five-inning over is 6-1 in Eflin’s last seven starts, including the June 29 game against Yamamoto, and 5-1-1 in the Marlins rookie’s last seven contests.

The over is also 5-2 between the teams in Miami this season.

Even with Yamamoto’s better performance last time out, the Marlins still have given up five or more runs in six of his last seven starts. Additionally, Miami’s bullpen is still like a gasoline can near a matchbook, with relievers giving up four or more runs in seven of its last 10 games.

Philadelphia has scored six or more runs in four of its seven games in Miami and five or more in seven of its last 12 overall.

Eflin got the better of Yamamoto in the first five innings of their June 29 matchup, and with the Marlins 1-5 at the midway point of the rookie’s last six starts, the Phillies are the pick here. It is a risky one as Philadelphia has not led after five innings in any of Eflin’s five starts since the matchup with Yamamoto, but the Phillies are 7-4-2 in their last 13 on the road.