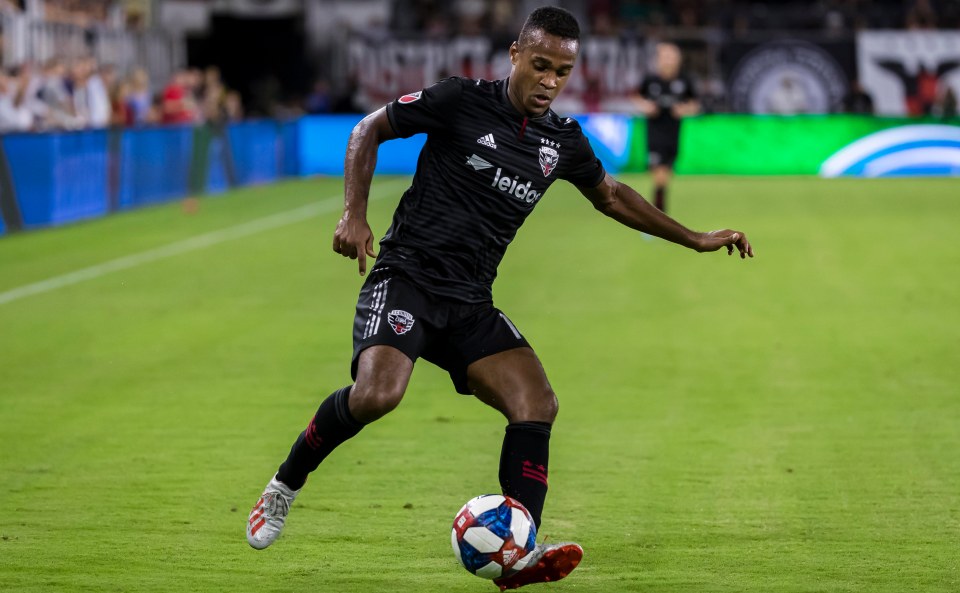 Recently acquired Ola Kamara has a chance to deliver in a big spot for D.C. United as the striker is expected to replace suspended star Wayne Rooney in Saturday night’s crunch match against the Philadelphia Union.

Rooney, who has been struggling to keep his frustrations internal of late as his second and final season with the Black-and-Red winds down, was given a straight red card in the first half of Wednesday night’s match against the New York Red Bulls. The sides later evened out after a New York player was sent off, but a controversial penalty after a foul by Lucas Rodriguez led to a go-ahead goal for the Red Bulls as they left the nation’s capital with a 2-1 victory and fourth place in the East – vaulting over United (10-9-9).

“It’s the wrong call,” United Coach Ben Olsen fumed to The Washington Post about the call. “So what do I tell my guys in there that work their (butts) off for 80 minutes and gave everything? One message is 80 minutes ain’t good enough, and you’ve got to play every minute and not put yourself in that spot by having a better start. But after that, I was extremely proud of the effort and the fight.”

Rooney will sit out this match, which leaves Kamara as the most likely option to replace him up front. The Norway international arrived in D.C. just before the close of the summer transfer window after starting the season with Shenzhen FC of the Chinese Super League.

Kamara is no stranger to MLS, having totaled 49 goals with Columbus and the Los Angeles Galaxy in the previous three seasons, and he opened his United account Wednesday with an exquisite right-footed curler from outside the box that went just inside the upper right corner to tie the match in the 55th minute.

“To be able to score a goal like that, it felt great,” Kamara told the club’s official website. “Hopefully that will be business as usual. It felt great coming back, seeing so many familiar faces. Now we just have to look ahead to Saturday and Philadelphia and get points and climb up the table.”

The Union (13-6-8) also took a slip down the Eastern Conference table, falling behind reigning MLS Cup champion Atlanta United for the conference lead on the first tiebreaker – wins – as both sides enter play this weekend on 45 points. Philadelphia was denied a third consecutive win last weekend, losing 2-0 at Chicago despite playing the entire second half with a man advantage.

A pair of breakdowns late in the first half led to the two goals, with the second coming via penalty in the 45th minute after Aurelien Collin clattered into Fire forward CJ Sapong trying to deal with a cross.

“A disappointing performance from the group; we weren’t ourselves,” Union coach Jim Curtin said. “We let an opportunity slip by. Some of our performances haven’t been as good as they were in the beginning of the year and that’s on me to rectify it.

“We want to find out now, as the big games come up, which Philadelphia Union group is this. We’ve done a lot of special things and I’m not going to let people knock us for having 45 points and tied for first place.”

The Union are opening a three-match homestand this contest looking to extend a five-game unbeaten streak (3-0-2) at Talon Energy Center. They have claimed points in 11 of their last 12 at home (8-1-3) since opening their home slate with a 3-1 defeat to Toronto FC.

Philadelphia played what Curtin called “one of their best games of the year” in the first match between the teams, a 5-1 pounding of United in D.C. on Aug. 4 as Marco Fabian had two goals and assisted on another. The Union played the final 50 minutes of the match with a man advantage after Junior Moreno was sent off with D.C. trailing 1-0.