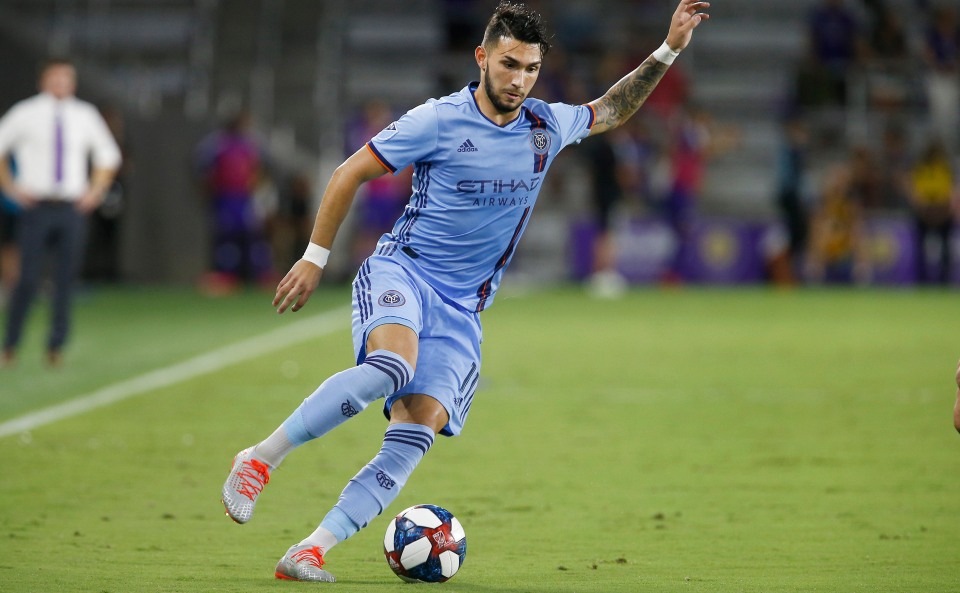 Bragging rights in the Hudson River Derby are on the line for New York City FC as they look to avoid being swept by the New York Red Bulls on Saturday night, but Dome Torrent’s team could also find itself atop the Eastern Conference by the end of play Sunday with a victory and the right results.

The Bronx Blues (12-8-5) are one point behind Atlanta and Philadelphia for the conference lead, which means a victory in this contest coupled with them losing would give them sole possession of first place while holding at least one match in hand over both. NYCFC is looking for a third straight victory overall after edging Columbus 1-0 on Wednesday night for its third straight home win.

Taty Castellanos’ goal in the 36th minute separated the sides as he beat an offsides trip while collecting Maxi Moralez’s pass played over the back line and slotted his shot into the lower left corner. Castellanos has scored five of his 10 goals in the last four matches for New York City FC, and Moralez notched his MLS-leading 17th assist.

“I think this was a really important game,” NYCFC goalkeeper Sean Johnson told ProSoccer USA after recording his first shutout since May 11. “Dome gave us a message before the game not to look past this game, obviously with the derby on the weekend. I think everybody’s focus was on this match, knowing that we had a couple games in hand and knowing that we had the opportunity tonight to continue to climb the table.”

The offensive axis of Moralez, Castellanos and Heber is central to any title aspirations NYCFC may have, with the South American trio accounting for 28 of the team’s 46 goals in league play. Heber leads the Bronx Blues with 12 goals, but only four have come at home over seven matches.

New York City FC is 20-8-3 at home since the start of last season, conceding just 23 goals.

The Red Bulls (12-5-10) are seeking their first sweep of their archrivals since NYCFC’s inaugural 2015 season and are winless in their last four trips to the Bronx (0-1-3) since a 7-0 thrashing in 2016 that remains the most lopsided result in this derby.

Chris Armas’ side claimed a contentious 2-1 victory over NYCFC at home July 14, taking advantage of an incorrect restart by the officiating crew that eventually resulted in Daniel Royer’s go-ahead goal on the hour.

New York can overtake NYCFC for third by virtue of the wins tiebreaker with a victory in this match and is trying to complete a road sweep of conference rivals following a 2-1 triumph at D.C. United on Wednesday night in the latest edition of the Atlantic Cup.

Royer took full advantage of a questionable penalty awarded after Michel Murillo was fouled, converting from the spot for the go-ahead goal in the 59th minute. New York survived a late push by D.C. as the teams finished the match 10-on-10, with Red Bulls defender Armo Tarek out for this game after being booked twice in the first half.

“The way these guys have gone after these last so many games feel like we’re a real team,” Armas said. “It’s good to see our guys get rewarded because they came with the right mentality. We talked about scoring first, we talked about sticking together … they endured a lot tonight and we’re three points better for it.”

While the Red Bulls have accrued 15 road points (4-3-6), their defense has not always traveled. They have shipped three or more goals in five of their last seven matches outside Red Bull Arena, going 2-1-4 in that stretch.