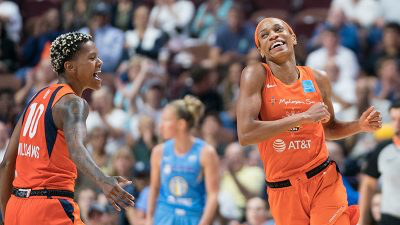 A potential inside track to the No. 2 seed and a bye to the semifinals of the WNBA playoffs are at stake Friday night when the Connecticut Sun host the Las Vegas Aces.

Both teams have clinched playoff spots along with the Mystics, who lead the Sun (19-9) by one game and the Aces (18-9) by 1 1/2 games for the top spot. Connecticut has been dominant at home all season, winning 13 of 14 games, which is part of a run dating back to last season in which Curt Miller’s team has won 20 of 21 at Mohegan Sun.

The Sun and the Aces have split their previous two meetings, and the round-robin of these three teams has seen Connecticut take two of three from Washington, which has taken two of three from Las Vegas. Connecticut also has not won a playoff game since 2012, losing to Phoenix in each of the last two postseasons, adding to the urgency of potentially gaining home court and a rest from the first two rounds with a win Friday night.

“We’re pretty banged up, so it’s a lot about finding recovery time – mental and physical – at this point,” Miller told ESPN. “We knew we would have a very challenging August.

“We’re not perfect; we may not come out with the energy and effort that you need every game. That’s been one of our concerns on the road. It’s different knowing you have more of a target on your back. But they’ve embraced that better and understand it more.”

Connecticut is trying to sweep a three-game homestand after defeating Dallas 78-68 on Sunday as Jonquel Jones had 16 points and 10 rebounds for her WNBA-leading 14th double-double, while Jasmine Thomas contributed 16 points and nine assists. She also had a 3-point play that triggered a game-breaking 9-0 spurt in the fourth quarter to power the Sun to their seventh straight home win.

“We had to understand that’s a big responsibility, and it takes even more effort,” Jones said about being one of the league’s frontrunners. “It takes everyone being a little more locked in. We’re a playoff team, but it’s time to take the next step.”

Las Vegas is looking to match a season high with a fifth straight victory as it begins a three-game road swing. Liz Cambage continued her sizzling stretch of play with 19 points and 15 rebounds for her fifth consecutive double-double Tuesday night as the Aces downed the Phoenix 84-79 in overtime.

A’ja Wilson added nine of her 19 points in overtime, showing no ill-effects in her second game back after missing eight full games and most of a ninth with a sprained ankle. The All-Star has scored 44 points in her two games and shook off missing 12 of her first 15 shots versus Phoenix to impact the extra period.

“When you’re an offensive person, when you miss shots, you get (angry),” Wilson told the Las Vegas Review-Journal. “The fact that my teammates still trusted me with the basketball is something I take a lot of pride. I knew I had to execute the best way that I could.”

Cambage has averaged 21.8 points and 11.6 rebounds during her five-game streak of double-doubles and will square off with an All-Star center for the second straight game after battling Brittney Griner. Cambage got the better of Jones in Las Vegas’ 89-81 win at home Aug. 11, scoring 10 of her 21 points in the fourth quarter and pulling down 12 rebounds while helping limit Thomas to eight points and 12 rebounds on 3-of-11 shooting.