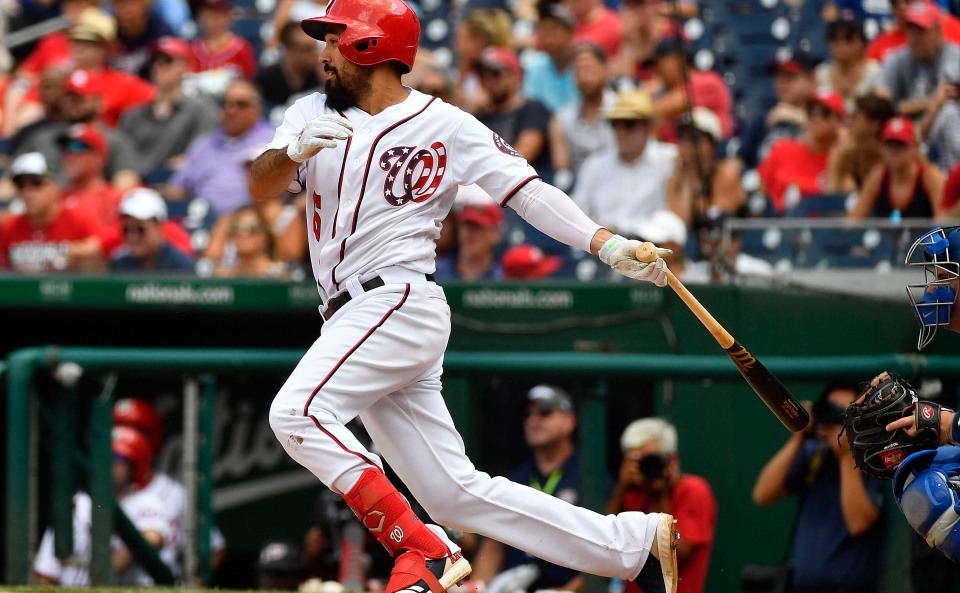 The Washington Nationals look to pad their lead atop the National League wild-card standings Friday night when they open a three-game series against one of their closest pursuers, the Milwaukee Brewers.

Milwaukee (63-58) is still involved in a three-way fight with St. Louis and Chicago for the NL Central lead, trailing the pair by 1 1/2 games for the division lead and the second wild-card spot.

The Brewers salvaged a split of their two-game series with the Minnesota Twins by rallying for a 6-5 victory Wednesday on Trent Grisham‘s three-run, eighth-inning homer. With closer Josh Hader mired in a slump, Matt Albers got the final two outs to cap 5 1-3 shutout innings by Milwaukee’s bullpen.

“We were grinding out at-bats and wearing down their pitchers,” Grisham told the Brewers’ official website. “You could see the frustration in some of the at-bats on their faces. You keep looking up and it’s a two-run game, a three-run game. We were always within a swing. Just heady baseball playing, taking dirtball reads, going long at-bats, grinding [Twins pitchers] down. You just felt like something good had to happen.”

Adrian Houser (5-5, 4.00 ERA) is now tasked with keeping the Brewers on track as he seeks his fourth win in five decisions. The right-hander is also looking to win back-to-back starts for the first time in his career after allowing a solo homer and two other hits over six innings in a 3-2 victory over Texas on Saturday while striking out a career-high 10.

Houser, though, also became a viral meme during the win after needing to throw up in the first inning after he made a fielding error.

Adrian Houser makes an error then pukes on the mound, a breakdown pic.twitter.com/hddQGm15LW

Houser served as an opener in Milwaukee’s earlier series versus Washington, striking out four in two scoreless innings May 7. He is 0-3 with a 7.04 ERA in five road starts, though, failing to last more than five innings in all of them.

Christian Yelich, who has already set career highs in home runs (39) and stolen bases (23) as he pursues a second straight NL MVP award, went 5 for 11 with a homer in Milwaukee’s three-game sweep of the Nationals in May and is 17 for 42 (.405) with three homers during an 11-game hitting streak against them.

Washington (65-55) enters this series looking for a fifth consecutive victory after punctuating a three-game sweep of Cincinnati with a 17-7 thrashing Wednesday. Adam Eaton, Anthony Rendon, and Kurt Suzuki all homered during a 10-run fifth in which every player in the lineup scored and helped Stephen Strasburg become the first 15-game winner in the National League.

We have a serious problem.

We hit 3 HRs in the 5th yesterday and are having a tough time deciding which dugout party dance was best.

Can you guys help us out? 🕺 pic.twitter.com/GViUXkmQ6k

The Nationals totaled 27 runs in the sweep, with 14 scoring on their seven home runs. They also went 14 for 23 with runners in scoring position, including 10 for 14 in Wednesday’s rout.

“I don’t know if I’ve ever done that before,” said Eaton, who is 10 for 23 over his last six games. “It was fun. It’s enjoyable. Not that you expect that. I think it shows our depth. … We don’t have too many holes in the lineup. I think that was something coming into Spring Training that we knew was one of our strengths. To be able to flex that a little bit there is pretty cool.”

Patrick Corbin (9-5, 3.41) would appreciate such an offensive outburst as he goes after his fifth consecutive win. The left-hander has had no-decisions in back-to-back starts but pitched well Saturday against the Mets, working around a pair of solo homers and one other hit in six innings before Washington lost 4-3.

Corbin’s turn did not come up in the May series at Miller Park, which may have been a good thing for him. He lost his last three starts against the Brewers pitching for Arizona, including one last year when he was reached for four runs in six innings of a 7-2 home loss. The southpaw is 2-5 with a 5.18 ERA in seven lifetime starts versus Milwaukee, last winning in 2013.

He has had mixed success against Yelich, who is 3 for 12 with a homer, triple, and four strikeouts in their matchups.

This is another confidence pick in Corbin, but also one against the Brewers, who have scuffled against quality pitching of late. In their last road trip at Oakland and the Cubs, they failed to score more than four runs in any contest.

And in even their recently completed homestand, the Brewers were silenced by Mike Minor during their series with the Texas Rangers. Add Corbin’s home form into the mix, and Milwaukee likely will struggle to push runs across.

Corbin’s form at home has been outstanding, going 6-1 with a 1.78 ERA in 11 starts, and six of the 15 runs he has given up at Nationals Park came in his lone loss back in late April. The southpaw is 5-0 with a 0.90 ERA in his last seven home starts and struck out 57 in 50 innings while holding opponents to a .181 batting average.

Milwaukee scuffled in its last road trip, going 1-5 against Oakland the Cubs and was held to four or fewer runs in each contest. Add in the bullpen issues with Hader trying to get right, and the Nationals are a confident play in the series opener.

Both pitchers are trending strongly with the under, which is 5-1-1 in Houser’s last seven starts and 8-1-1 in Corbin’s last 10. The five-inning under has also been solidly behind Milwaukee of late and is 9-4-1 in the last 14 games for the Brewers.

The under has also posted a 6-0-1 mark in Corbin’s last seven starts in the nation’s capital.

Corbin’s home form again guides this pick, with the under 7-0 during his current run at home. But the southpaw has also been at his best against the best of late, with the under 6-0 in his last six starts against above-.500 teams.

Again, it’s a ride on Corbin’s form at home, where the Nationals are 7-0 after five innings in his last seven starts there. Washington is also 7-1-4 in its last 12 overall at the midway point while Milwaukee is 2-6-2 after five in its last 10 on the road.

Continuing to pound Corbin’s home form, the Nationals are worth a flyer considering they have scored first-inning runs in six of their last eight games. Corbin has been reached for runs in just two of his 11 outings at home, and the Nationals recovered to be no worse than tied in those contests.

Houser has a 7.00 ERA in the opening frame and has been reached for runs in four of his nine starts. He did toss a scoreless first versus the Nats in May, but Milwaukee has fallen behind in the first in four of its last eight road games.