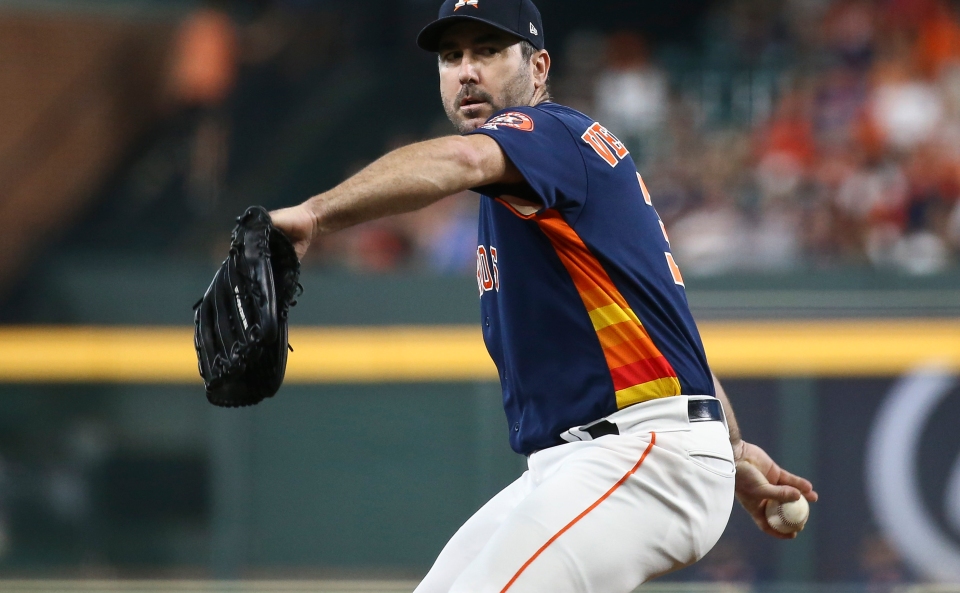 Currently enjoying his best run of the season, AL Cy Young Award frontrunner Justin Verlander looks to become the first 16-game winner in the majors Sunday when the surging Houston Astros go for a three-game series against the foundering Baltimore Orioles.

Verlander (15-4, 2.68 ERA) has credited Astros management for making him a better pitcher since his 2017 arrival from Detroit with the use of analytics, but at the same time, the right-hander’s effectiveness with his expanded knowledge has been staggering.

Verlander has a 1.45 ERA during his five-start winning streak and struck out 53 in 31 innings while holding opponents to a .170 batting average. He also has recorded 10 or more Ks in his last four starts, fanning 10 in six innings of one-run ball last Sunday in a 3-1 victory over Seattle.

“It’s kind of hard not to just drool over what he can do in general, but then he didn’t really stay in sync and he still punched out double digits,” manager AJ Hinch told the Astros’ official website about Verlander. “Good day for him to get out of there a little bit early, given how I saw he was feeling and executing. It’s pretty nice when a decent day is a 10-punchout, one-run game.”

The biggest year-on-year difference for the 36-year-old Verlander is he is getting more outs on contact. Opponents are hitting just .199 this year when putting the ball in play compared to .274 in 2018. That has helped make his mistakes relatively painless. The 29 home runs he has given up this year have accounted for all but 13 of the 49 runs he has conceded, and only one was more than a two-run shot.

Despite Camden Yards being a hitter-friendly park, Verlander has fared well there and enters this contest 8-1 with a 2.42 ERA in 11 lifetime starts. The righty has been taken deep just eight times in 78 innings and yielded more than three runs only once.

He tossed six shutout innings in his last visit last season, but the Astros blew a three-run lead before recovering for a 4-3 victory. This may be a game Orioles slugger Chris Davis watches from the bench as Verlander has struck him out 20 times and limited him to seven singles in 35 at-bats.

Wojciechowski faces tall order in trying to slow down Astros

Originally a first-round pick by the Toronto Blue Jays, Asher Wojciechowski (2-5, 4.89) was dealt to Houston in 2012. He made his way up the Astros chain and broke camp with the club in 2015. The right-hander went 0-1 with a 7.16 ERA in three starts and five appearances before being designated for assignment and eventually latched on with the Cincinnati Reds in 2017.

That did not last long and he bounced around again until the Chicago White Sox dealt him last month to the Orioles — who signed him to a minor-league deal in December 2017 before Wojciechowski opted out of that deal in July of last year. His high-water mark came late last month in beating Boston and the Los Angeles Angels in back-to-back starts, but Wojciechowski has been hard in losing back-to-back outings.

Wojciechowski — like every other Orioles starter — has been plagued by the long ball and served up three homers in four innings of a 9-4 loss to the New York Yankees while allowing five runs overall. Five of the 10 gopher balls he has allowed in 38 2-3 innings have come in his last two outings and seven have been launched in Baltimore, where he is 1-3 with a 5.06 ERA in four starts.

This will be his first career appearance against the Astros.

Another aggressive play on an alternate line from PointsBet.com, Verlander has led at the five-inning mark in his last five starts, and three of them have been by more than three runs. Houston has also scored at least 10 runs in the first five innings in two of its last three games while Baltimore has trailed by three or more runs in four of its last eight.

The alternate line comes courtesy PointsBet.com, and while the original pick was laying 2.5 runs, the combination of Saturday night’s utter demolition of the Orioles and Verlander’s dominant run slides the pick is higher with a slightly lower confidence rate.

Professionalism aside, there is little reason to believe Baltimore is going to put up a quality fight.

It is an all-in pick on Verlander. In addition to all the aforementioned superlatives, also won his only non-opening day start on six days’ rest — conceding one run in seven innings while striking out nine. The Astros form also gives confidence in laying the extra run as the rotation continues fine-tuning itself ahead of the playoffs.

The extra half-run helps in the case as a counter play following Houston’s football-like score Saturday night. The under is on a four-start run with Verlander during his current superb stretch and is also 5-0 in his last five starts during game 3 of a series. The under is still 10-2 in the last 12 meetings between the teams and 5-1 in the last six at Camden Yards. The expectation is for Verlander to be good enough to cancel out a good portion of Wojciechowski’s struggles to help the under continue its roll.

There are no lack of options to choose from after the Astros socked six home runs Saturday night, but Alex Bregman looks to be the best of them after hitting his 19th homer on the road in that win. Bregman is hitting .480 (12 for 25) with three homers and five doubles in his last eight road games and a lifetime .304 hitter with four homers in 12 games at Camden Yards.

The hedge is that Verlander continues being dominant while Wojciechowski emerges relatively unscathed his first time through the lineup. Opponents are hitting just .103 (6 for 58) the first time they see the right-hander in the game, and the hook offers what could be vital help.

Verlander has conceded just one run in the first five innings of his last four starts.

With few opportunities to gain plus-money on a standard bet available, this one offers a low-risk with a surprisingly high reward. The Astros have scored multiple first-inning runs in their last three games and also have conceded just one run in the last 13 games while grabbing leads on seven occasions.

Wojciechowski has record five consecutive scoreless opening frames, but after Saturday night’s beatdown, the Astros are clearly worth a play to see if they are still swinging hot bats.