The foundation Marco Silva was laying in his first season at Everton appeared to be taking hold as the Toffees closed last term with a flourish to finish eighth. After an aggressive summer in the transfer market, Everton look to continue their upward climb starting with Saturday’s lid-lifter at Selhurst Park versus Crystal Palace.

Everton missed out in a Europa League berth by three points as they finished behind Wolverhampton. Silva endured an uneven maiden season in Merseyside, and a five-match winless spell in December that started with a cruel derby loss at Anfield to Liverpool and ended with a 6-2 hiding at home by Tottenham Hotspur only added to the unease.

By the time May rolled around, however, there was optimism at Finch Farm and the blue side of Liverpool. Everton played their eternal rivals to a credible scoreless draw at Goodison Park, kicking off a 6-3-2 run to the tape with victories over top-six sides Chelsea, Manchester United, and Arsenal.

Buoyed by their success and with designs on returning to European play, owner Farhad Moshiri opened the purse strings as Everton landed highly rated teenage striker Moise Kean from Juventus for just under £25 million and made defensive midfielder Andre Gomes’ loan from Barcelona permanent on a £22.5 million move.

“Moise Kean looks like a very good footballer with a lot of different qualities,” talisman Gylfi Sigurdsson told evertontv. “He is still very young but he has shown his potential with Juventus and has an extremely bright future.

“It is good for the morale of the team when you see top players being brought in. It is good for competition and it is nice to bring in new players who are determined to make an impact.”

Everton worked right up until Thursday’s deadline, getting rebuffed in their bids for Palace striker Wilfried Zaha and Manchester United defender Marcus Rojo, but they were able to secure World Cup winner and right back Djibril Sibide on a season-long loan from Monaco to challenge Seamus Coleman.

The Toffees also swooped in late to land Alex Iwobi, signing the former Arsenal winger to a five-year deal to provide depth on the flank and compete with another former Gunner, Theo Walcott.

“Alex was one of our main targets for this window and I believe he is a fantastic signing for Everton. He is a direct and skillful winger and attacking midfielder who always works very hard for his team,” Silva told the team’s official website. “He is still young but already with a lot of top-level experience – 100 Premier League matches, more in Europe and many international games.

“Alex fits exactly the profile of player I want in my model. He is hungry to join Everton and take the next step in his career, to help us compete with the strongest teams in the league and reach his potential at our club.”

Veteran midfielder Fabian Delph arrives from champions Manchester City, and he likely will get the first chance to form a defensive midfield tandem with Gomes in Silva’s preferred 4-2-3-1 set-up after Idrissa Gueye departed on a £27 million move to PSG. Another summer signing, Jean-Philippe Gbamin, will serve as depth in defensive midfield.

The spine in the back remains the same with keeper Jordan Pickford and centre backs Yerry Mina and Michael Keane, though Kurt Zouma has returned to his parent club Chelsea. Richarlison and Bernard are expected to flank Sigurdsson, with Richarlison having made a successful transition following a mid-season switch from centre-forward last term. Dominic Calvert-Lewin is expected to take that role, with Cenk Tosun as the understudy.

Gbamin’s arrival made James McCarthy surplus to goods, and the Ireland international will have a quick reunion with his former team after completing a move to Palace on Wednesday.

McCarthy’s late arrival was one of four additions for Crystal Palace, who were relatively quiet in terms of signings in the summer window but offered plenty of intrigue in fighting off suitors yet again for Zaha. The Ivory Coast international, whose 10 goals were second on Palace behind Luka Milivojevic’s 12, tried to force a move to Arsenal earlier in the summer but that was rebuffed when the Gunners did not meet Palace’s valuation.

“It’s been well documented that he’s wanted to leave but it has not worked out for him in that respect. He’s a professional and has got a good contract with us. He’s very much a player we respect and I believe he respects us,” Palace coach Roy Hodgson diplomatically told Sky Sports. 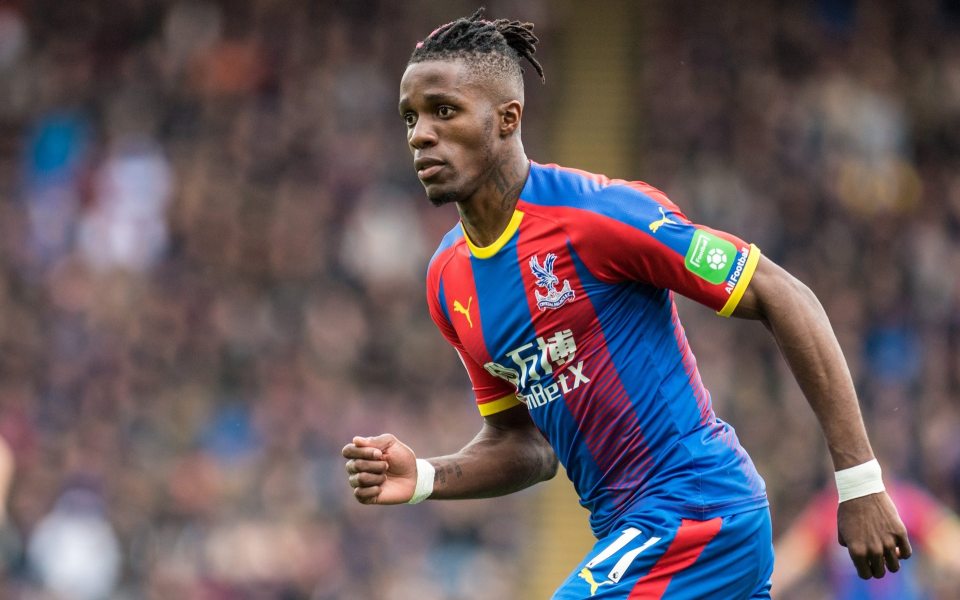 “We expect him to come back and do what he does and we’re looking forward to a season with him again. Everyone here has a good relationship with him. There’s not a problem with that.

“His beef is with the chairman and owners of the club because he’s wanted to leave and they haven’t received the offer that they think is sufficient to allow him to leave. He has to come to terms with that, when you sign long term contracts you are expected to honour them and we expect him to do that.”

Hodgson, who performed one of the great relegation escape acts of the Premier League era after arriving at Selhurst Park in 2017-18, had far more stability last term as the Eagles finished 12th on 49 points – their most in the top flight.

But the gaffer has an enormous hole to fill on his back line as promising right back Aaron Wan-Bissaka – Palace’s player of the year in 2018-19 – made a £49.5 million move to Manchester United. That leaves Joel Ward and Martin Kelly battling to succeed the 21-year-old, and the signing of veteran centre back Gary Cahill on a free transfer from Chelsea does give Hodgson a formidable pairing in the middle of his back four with Mamadou Sakho.

All but two of Milivojevic’s goals came from the spot as Palace will again count on the trio of Zaha, Andros Townsend, and Christian Benteke to provide the lion’s share of goals. The club were unable to make Michy Batshuayi’s loan from Chelsea permanent, with supporters again hoping Benteke finds his 15-goal form from 2016-17.

Palace also signed Victor Camarasa for midfield depth, with the Real Betis loanee staying in the Premier League for a second straight season after playing 33 matches for relegated Cardiff City.

“I am very happy to be here, and I’m so excited to start with the group. I think Palace has great players and it is a great club,” Camarasa told the club’s official website after signing. I’m going to work hard to play football, and I hope that the fans are excited with my football.”

Everton took four of a possible six points last season, not conceding in either match and playing to a scoreless draw at Selhurst Park. The Toffees carry a nine-match unbeaten streak (4-5-0) against Palace into this contest, and Selhurst Park has been a happy hunting ground with four wins and four draws in their last eight visits.

Per Ladbrokes, Everton are slight favourites to continue their success at Selhurst at 27/20 odds, while Palace are 11/5 to take all three points. The odds of a draw are slightly underneath a Palace victory at 21/10.

Oddsmakers are also torn on whether both teams will score, with “No” slightly edging out “Yes” with 5/6 odds on the former compared to 20/23 on the latter. For the 2.5-goal over/under, the under is clearly preferred at 6/10 compared to 6/5 on the over.

New boy Ken has been tipped as the favourite to score first at 9/2, with teammate Richarlison close behind at 5/1. Palace striker Benteke and Toffee talisman Sigurdsson are joint-third at 11/2, while the disgruntled Zaha is a 6/1 option. For any-time goal-scorers, Kean again leads the board at 2/1, followed by Richarlison (9/4), and at 12/5, Sigurdsson edges out Benteke (5/2) for third.