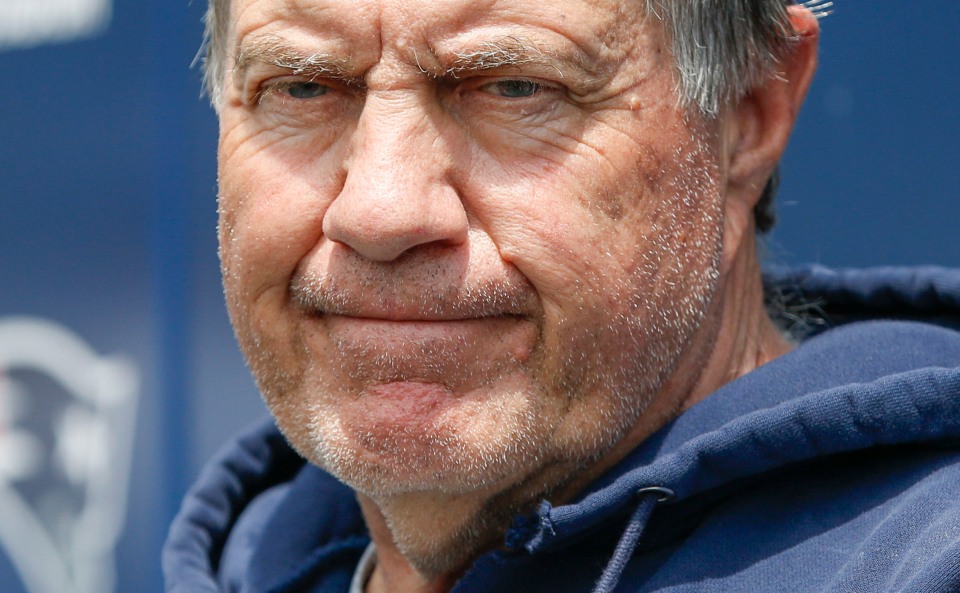 Throughout his eventual Hall of Fame career, Tom Brady has produced a litany of individual achievements as part of his storied run with the New England Patriots.

As he opens his 19th season under center as starting quarterback, the challenge of leading the Patriots to an unprecedented seventh Super Bowl title begins Thursday night in their exhibition opener against the Detroit Lions.

Brady, who celebrated his 42nd birthday Saturday — a distinction that will make him the eighth non-specialist player in NFL history to start a regular-season game should the preseason go according to plan — noted he added some muscle in the offseason before going back to his regular routine for his normal flexibility.

"It was a great off-season, but now it's time for football." pic.twitter.com/Q2oO2hdaOw

“I wanted to get a little bigger this year and put on a few more pounds and try to absorb the hits a little bit more, and I worked pretty hard at that. It was good,” Brady said in his first public comments at training camp. “I still realized when I got here that I wanted to be a little more fluid, and get back to the fluidity that I’m used to too. There’s a difference between getting really dense and obviously being more pliable, and that’s really what my focus was.”

There are few things left for Brady to accomplish with six Super Bowl titles and nine Super Bowl appearances, but a seventh Lombardi Trophy would move New England ahead of Pittsburgh for the most among NFL teams. It would also mean the Patriots will have reached the Super Bowl for the fourth straight year, a feat only the Buffalo Bills achieved from 1990-93.

But for those things to happen, Brady and the Patriots must first fill an enormous void at tight end created by the retirement of Rob Gronkowski. The five-time Pro Bowler — another eventual Hall of Famer — had such a unique skillset that created so many matchup problems the Patriots were able to get by without an elite wide receiver for many seasons during their run of excellence.

New England brought back Ben Watson — now 38 years old — but he will miss the first four games of the season for violating the league’s drug policy. That leaves youngsters Stephen Anderson, Ryan Izzo, and Andrew Beck along with Matt LaCosse to vie for the Week 1 starting spot, with LaCosse likely owning the inside track after totaling 24 catches for 250 yards with Denver last year.

The Patriots did pick a receiver they hope will become elite at the end of the first round in N’Keal Harry. The 6-foot-4 Harry had a pair of 1,000-yard seasons at Arizona State, the latter of the two playing in a pro-style offense under former NFL coach Herm Edwards.

Tom Brady to N’Keal Harry into the end zone for the touchdown #Patriots pic.twitter.com/M2KtQ5QfRf

The running game is in the capable hands of Sony Michel and James White as each brings distinct attributes. Michel finished 69 yards shy of 1,000 despite missing three games and starting only eight, while White is Brady’s primary safety valve and had a career year receiving with 87 receptions for 751 yards and seven TDs.

An underrated defense that delivered in the Super Bowl by holding the high-octane Los Angeles Rams to three points added veteran defensive end Michael Bennett via trade with the Philadelphia Eagles. A three-time Pro Bowler who won a Super Bowl title with the Seattle Seahawks, Bennett is expected to start on the right side of New England’s 4-3 defense and has recorded seven or more sacks in six of his last seven seasons.

Why Michael Bennett’s teammates call him a “walking library” of pass-rush knowledge https://t.co/bdVcH2Sgue

“He brings so much insight,” defensive lineman Deatrich Wise told The Athletic about the 33-year-old Bennett. “He’s been in the league for multiple years, so he’s seen it all – the different type of fronts and offensive linemen. He knows all the different types of rushes. He just helps us all out, from older to younger. He’s just like a walking library.”

Belichick was happy to be working in tandem with his former defensive coordinator leading up to the game as the teams are conducting a joint mini-camp ahead of Thursday’s exhibition opener.

“I think those are all good. I think it gives us a great opportunity to start to begin the process of seeing an opponent, recognizing the adjustments we need to make, making those adjustments quickly – both as a coaching staff and as players, and in each unit,” he said Monday. “This is a great opportunity, and especially with [Lions coach] Matt [Patricia] and his staff, and how well I feel like we can work with them. Certainly, it’s gone very smooth up to this point, and I expect it to continue – the reciprocal cooperation to make sure that everybody gets as much out of it as we can, again, individually, by unit, and as an entire team. I think the structure of it’s been great. They’ve been great with it.”

If your team scores the first Touchdown of the game, YOU WIN! Pre-Game, Moneyline Bets Only. 1st $50 Staked. (New Jersey residents only).

Many would say the high point of former Patriots defensive coordinator Matt Patricia’s first season in charge of the Lions was beating ex-boss Bill Belichick and New England in Week 3 for his first victory. The problem is that meant there were few other highlights as Detroit finished 6-10 and last in the NFC North while missing the playoffs for the second straight season.

“When you get to the core message of the team,” Patricia told The Athletic right before camp opened. “I think the biggest thing for us is, we’re just all excited to be out here, we’re all excited to go out and try to get better and improve. … These standards of what we expect out on the field is something that is an openly great conversation that we have as a team, because everyone is trying to challenge each other to improve, not just coaches but players, and to give everything we can out on the field.”

The offense, which has a new coordinator in the well-traveled Darrell Bevell and Matthew Stafford entering his 11th season, has a few new weapons. One is a familiar face to Patricia in ex-Patriot wide receiver Danny Amendola, who is with his third team in as many seasons after totaling 59 catches for 575 yards with Miami in 2018.

He is expected to roam the slot and form a potent 1-2 tandem with Marvin Jones, who was limited to 35 catches in nine games last year due to injury. That contributed to Detroit averaging 20.3 points while being held to 16 or fewer on six occasions.

Second-year running back Kerryon Johnson, who had a team-best 641 yards as a rookie despite playing only 10 games also has a new partner in C.J. Anderson, who parlayed his late-season run in helping the Los Angeles Rams to the Super Bowl into a $1.5 million deal.

“It’s more like, ‘What do you feel?’ Or ‘What do you not know?'” Anderson told ESPN about mentoring the 22-year-old Johnson. “And then let me try to help you with what things you don’t know. What me and you can do together. How to see the game. How can we talk, when I come off the field and telling you what I’m seeing, and when you come off the field you tell me. Things like that.”

Bevell also has rookie tight end T.J. Hockenson, who at No. 8 was the highest overall pick of a tight end since the San Francisco 49ers selected Vernon Davis sixth in 2006. Hockenson has quickly established himself as one of Stafford’s favorite targets in camp and will likely get plenty of reps throughout the preseason to win the starting role.

Defensively, the Lions are striving to be a better ball-hawking unit after finishing 31st with 14 takeaways in 2018. Cornerbacks Darius Slay and Quandre Diggs combined for six of the team’s seven interceptions, and Slay — who had eight alone in 2017 — is confident there will be improvements as the secondary added safety Andrew Adams from Tampa Bay.

“We all got ball skills. I like that,” Slay told The Associated Press. “We improve the turnovers, we increase the chances of (quarterback Matthew) Stafford scoring, and the offense scoring more.”

Patricia also appears to be enjoying the reunion with his former boss ahead of Thursday’s contest.

“As simple as it could be,” Patricia said. “These are things that (Belichick) and I have done for a lot for years together. Not against each other, but obviously together. Really just going back through some different formats that we used and kind of agreeing both sides, based on where our teams were right now and just trying to get the best evaluation for what we need for the players that we currently have. Pretty easy conversation all the way through the spring, through the summer, and up until last night.”

The actual exhibition game is the culmination of the teams being around each other for four days that include three days of joint practices. This will not only give the coaching staffs a chance to scout specific offensive situations, but it puts an emphasis on execution, which does not tend to be all that crisp in Week 1 of the preseason.

And with Patricia one of the few people who knows how to read the wrinkles and creases within New England’s base offensive schemes, this should be a low-scoring affair.

In many ways, this is the perfect Week 1 preseason game for Belichick, who gets to see his entire team poked and prodded like a science experiment by someone who knows what they run inside and out in Patricia and the Lions.

That also means it would not be surprising to see the Lions take this game more seriously in terms of winning and losing. New England has a lot of holes to fill in the passing game — the preseason will essentially be an audition for a tight end to fill the first four games when Watson is suspended and a No. 2/3 receiver with Julian Edelman — and this may be one of Belichick’s most enjoyable times as coach, when he sees everyone on the roster and can pinpoint progress or regression.