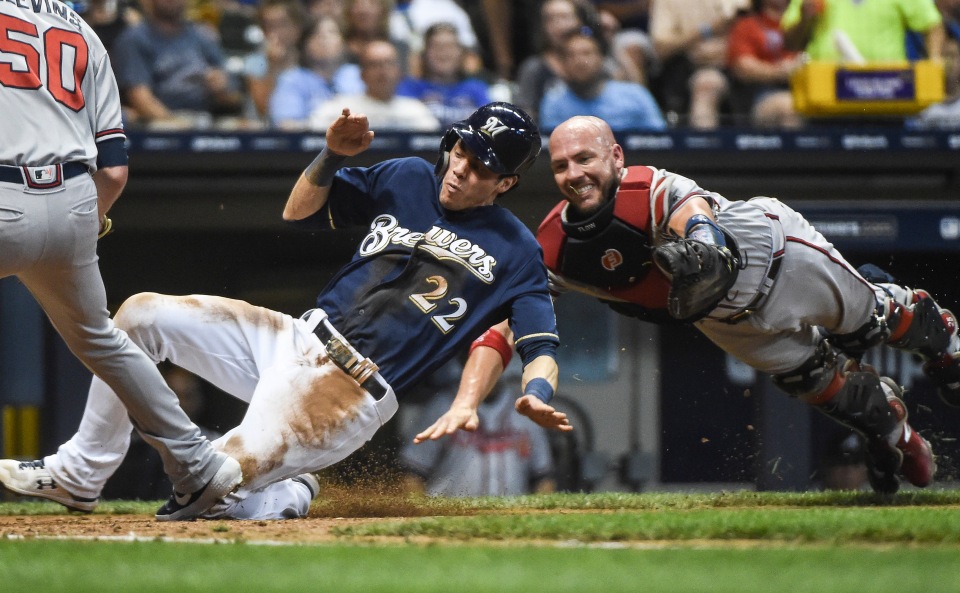 Zach Davies may be winless in six starts, but he was most not certainly at fault for the streak being extended in the last three.

The Brewers staff ace looks for his first win in nearly six weeks Thursday night when Milwaukee begins a four-game set against the Arizona Diamondbacks.

Davies (7-2, 2.89 ERA) has not won since Milwaukee’s 5-3 win over Pittsburgh on June 8, which was also the last time the Brewers backed him with more than three runs.

Though the right-hander is 0-2 with a 4.18 ERA in his last six starts, he has no record and a 0.55 ERA in the last three, limiting opponents to one earned run in 16 1-3 innings. Davies’ average run support or 4.3 runs per start is 12th-lowest in the National League.

Davies matched Madison Bumgarner on Saturday, limiting San Francisco to an unearned run over six innings and scored Milwaukee’s lone run off the Giants starter after smacking a double in Milwaukee’s eventual 5-4 win.

Davies, who is facing the Diamondbacks for the first time since 2017, is 2-1 with a 4.15 ERA in three career matchups.

Milwaukee (50-47) remained 2 1/2 games behind the Chicago Cubs for the NL Central lead by hanging on for a 5-4 win Wednesday in the rubber game of its series with the Atlanta Braves.

Manny Pina homered and drove in three runs while Christian Yelich added a solo shot for the Brewers, who have gone 3-6 on the road versus NL West teams Los Angeles, San Francisco, and San Diego.

Yelich regained a share of the NL home run lead with his 34th that was also his third in four games. The All-Star outfielder is 11 for 27 (.407) during a seven-game hitting streak and is a lifetime .310 hitter versus Arizona.

Rookie Merrill Kelly (7-9, 3.93 ERA) can empathize with Davies considering the Diamondbacks have failed to plate more than three runs for him at any point during a five-start winless stretch. He is also right behind Davies in terms of run support average at 4.34 runs per start.

Pitchers in the MLB with no stolen bases allowed this season (min. 90 IP):

The right-hander, though, has also failed to help himself in that span with an 0-3 record and 4.50 ERA. Davies was reached for four runs — only one earned — in five innings of a 4-2 loss at St. Louis on Saturday. Arizona committed three errors in that game, including one by Kelly trying to field a squib shot that contributed to a two-run third by the Cardinals.

“It was a super spinny ball,” Kelly recounted to the team’s official website. “At first, it looked like it was going to go foul, then kind of fair and then foul.

Kelly has pitched well at home despite a 3-3 record, posting a 3.04 ERA in eight starts and holding opponents to two or fewer runs in five of those games. This will be his first career appearance against the Brewers.

As mentioned previously, Davies has pitched well with nothing to show for it of late, while Kelly has been slightly more uneven. But with the rookie clearly more comfortable pitching at home and the number getting the bonus of the hook, the under is a solid play.

Davies contributed three unders to that lengthy run, but the bigger driver is a Brewers offense that has plated one or no runs 10 times. Kelly has helped the five-inning under deliver an impressive 7-1 mark in his eight home starts.

The Diamondbacks appeared to bounce back from a lost weekend in St. Louis by knocking around the Texas Rangers in a two-game interleague set.

There is not much separating the teams or the pitchers, though there is some skepticism in Milwaukee even with its back-to-back wins over Atlanta. Additionally, Arizona’s home form — the Diamondbacks won six of their last seven at Chase Field before the All-Star break — and Milwaukee’s uneven road form versus NL West teams give the D-Backs a slight lean.

A confidence pick in Kelly shaking off his lone poor home start and last outing in St. Louis to deliver a quality start in this outing. The rookie has four starts in which he has yielded three or fewer runs while pitching six or more innings.

The Brewers have also been held to three or fewer runs in four of their nine games at NL West teams and four or fewer in 12 of Davies’ 19 starts.

An alternate spread pick courtesy PointsBet.com, this is another confidence pick in Kelly and against Milwaukee’s five-inning road form. The Brewers are 2-6-3 at the five-inning mark in their last 11 games, with both wins coming in the last two days.

Those struggles extend to the road, where the Brewers have posted a 2-7-1 mark at the midway point in their last 10. The Diamondbacks are 4-2 after five innings in Kelly’s last six home starts and have been ahead in their last seven at home.

Kelly’s home form and Davies’ overall first-inning success make the under a worthy option even at plus-money. The Diamondbacks rookie has been nicked for first-inning runs just twice in his eight home starts, and Davies is sporting a 1.89 ERA on the season in the opening frame.

That includes being reached for runs on just two occasions in his 10 road starts. While Arizona did put up a seven-spot Wednesday against Texas, the Brewers have scored and conceded just one run in their six games since the All-Star break.