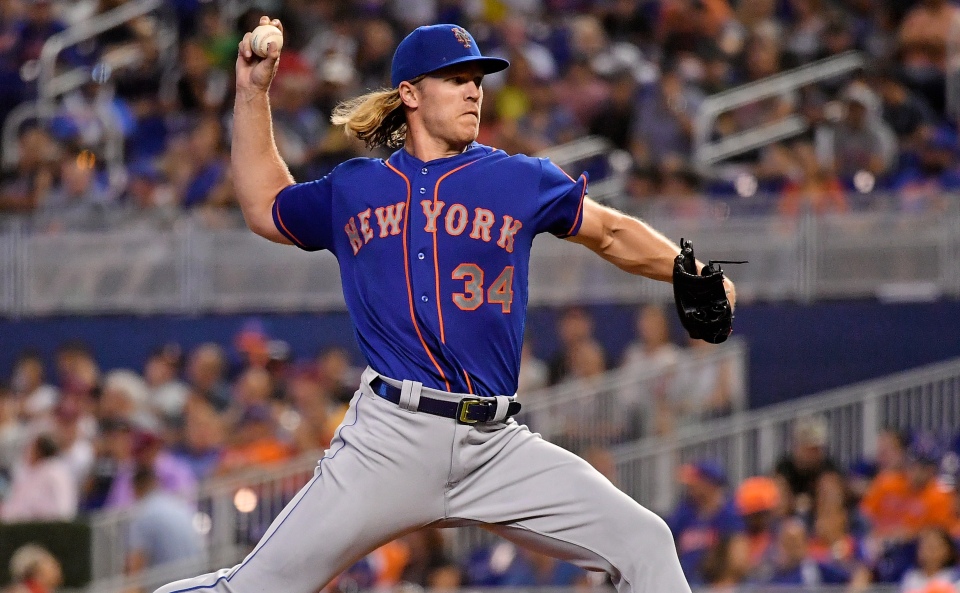 While trade rumors persist regarding San Francisco Giants starter Madison Bumgarner, there may be a late developing market for his opposing number Thursday night in the first of four games against the New York Mets — Noah Syndergaard.

Though many considered Zack Wheeler to be the Mets starting pitcher most likely dealt before the July 31 deadline, that may have been scuttled with Monday’s decision to put the right-hander on the injured list with fatigue in his throwing shoulder.

That leaves the 26-year-old Syndergaard (7-4, 4.55 ERA) as an intriguing but potentially costly option to add at the deadline. The hard-throwing right-hander, who is making $6 million this season, has two years left under team control in terms of arbitration rights but would also require a suitor to reach deep into its prospect pool to swing such a trade.

Syndergaard, though, has kept the distractions to a minimum as he won both his starts around the All-Star break and is looking to extend a personal winning streak to five. He limited Miami to two runs and five hits over seven innings of a 4-2 victory, and his nine strikeouts were his most since May 24.

“I’m trying not to pay too much attention to that,” Syndergaard told the team’s official website about the trade talk. “As of right now, I love being a Met. If something were to ever change, it would definitely be bittersweet just because New York City itself, the fanbase and just the guys in this clubhouse have a special place in my heart.”

Syndergaard did not get a decision versus the Giants at home last month, yielding three runs in 6 2-3 innings in New York’s 9-3, 10-inning defeat. The righty, though, has dominated San Francisco in winning both his starts at Oracle Park, conceding one run and four hits in 17 innings while striking out 17.

The Mets (44-51) have won four straight and are coming off an impressive two-game sweep of AL Central-leading Minnesota on the road with Wednesday’s 14-4 romp as Pete Alonso, Dominic Smith, and Amed Rosario all homered.

Anyone who had an interest in acquiring Bumgarner (5-7, 3.86) this month probably cringed before the All-Star break after he took a line drive off his pitching elbow off the bat of Jose Martinez in his July 6 start versus St. Louis.

Bumgarner, though, put those worries to rest Saturday in Milwaukee where he worked in and out of trouble while limiting the Brewers to an unearned run in five innings. He did not get the decision in San Francisco’s 5-4 walkoff loss but allayed many fears with the 103-pitch effort.

“It’s not completely normal yet, but it was good enough,” Bumgarner told the Giants’ official website. “No pain. It feels normal. There’s still some swelling in there and some bruising. … It was definitely a grind. I had to pitch through a lot of traffic, a lot more than you’d want.”

The longball hurt Bumgarner in his matchup with Syndergaard last month as all three runs scored came on homers by Alonso and Wilson Ramos over his six innings. It was one of the southpaw’s few subpar starts against the Mets as he enters this contest 6-0 with a 2.00 ERA in eight career matchups.

Bumgarner has made just two home starts against the Mets, winning the most recent one in 2016. Ramos has given Bumgarner fits, going 7 for 19 with a pair of homers, and Todd Frazier has also taken him deep twice while going 7 for 17.

The Giants (47-49) have charged back into contention on the strength of a five-game winning streak and capped a four-game sweep of Colorado at Coors Field with an 11-8 victory. San Francisco has won 12 of its last 14 games, averaging 8.21 runs in that stretch.

San Francisco’s current offensive form warrants an all-in pick here at a reasonable rate of return, especially with the belief the Giants will get at least two and more likely three innings versus New York’s bullpen in a regulation contest.

The Giants have been held under four runs just twice in their last 14 games, while the Mets have yielded four or more in six of their previous eight on the road.

This is a pick riding the hot trends of Bumgarner and the Giants. San Francisco has not trailed in Bumgarner’s last four starts, leading in three of them, and Bumgarner also pitched the Giants to a 2-0 lead against Syndergaard at the midway point in their previous matchup.

Both teams are on winning streaks, yes, but the Giants have been playing well for nearly three weeks and get the nod here. Bumgarner showed no ill-effects of the liner of his elbow and has not been bothered by essentially being showcased every start for nearly six weeks.

The Mets may have a bigger dilemma on their hands potentially moving Syndergaard, which could signal the start of something bigger in terms of the direction of the franchise, but to his credit, the right-hander has also been professional during the process.

San Francisco’s offense, though, is the swing vote in this one with the expectation to squeeze out just enough to eke out a victory in the series opener.

As a fun aside, the Giants are coming off a four-game series at Coors Field where the five-inning over/under was at least seven runs in every game.

This is a pick against the number and not the pitchers, whose quality has been mentioned previously. It is simply a case of a run here and a run there adding up before Syndergaard and Bumgarner give way to their respective bullpens, and in the case of the Mets, there is little confidence given their relievers have a combined 5.41 ERA.

The over has gone 11-5-2 in New York’s last 18 road games and is also 3-0-1 in Syndergaard’s last four starts opening a series. The over has also delivered in the last four of San Francisco’s series opener and posted a 4-1 mark in Bumgarner’s last five starts in series openers.

Additionally, the Giants have held teams to one run in the first five innings in each of Bumgarner’s last four starts and in seven of the last nine. The under is also 7-3-6 in New York’s last 16 games but 2-5-1 in Syndergaard’s road starts, so this is close to a toss-up pick.

A few things are at play here that make this worth a flyer. One is Syndergaard being fairly solid in the first inning — he has yielded single runs twice in his eight road starts and has a respectable 3.00 ERA in the opening inning.

Bumgarner has yielded first-inning runs in four of his last nine home starts and is more shaky, entering this contest with a 4.95 ERA in the first. The swing vote, though, is the Mets getting early runs for Syndergaard on the road. They have grabbed a first-inning lead in five of his eight road starts, totaling 12 runs in those instances.