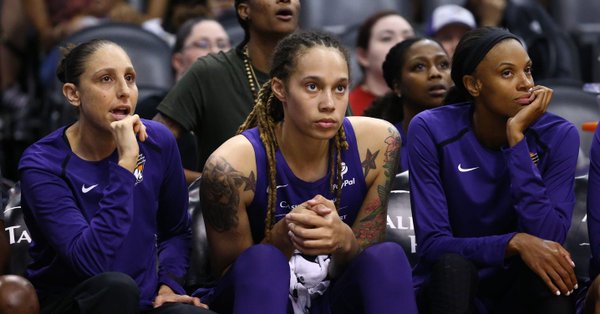 Even without injured superstar Diana Taurasi, the Mercury boast one of the top frontcourt tandems in the league in DeWanna Bonner and Britney Griner.

Yet it has yet to translate into consistent success for Phoenix, which looks to get back to .500 once more Friday night when it hosts a Los Angeles Sparks team wrapping up a four-game road swing.

The Mercury (2-3) are expected to be without Taurasi for at least another month as she recovers from back surgery, leaving much of the scoring burden on Bonner and Griner. The pair lead Phoenix in scoring at 24.2 and 16.4 points per game, respectively, and have combined to pull down 15.8 rebounds per contest.

Taurasi has made strides of progress, participating in non-contact drills as she celebrated her 37th birthday earlier this week. The veteran has been trying her best to be a vocal leader to a team still trying to find its way with plenty of new faces.

“The first two weeks is always a struggle to all get on the same page,” the superstar noted to AZCentral.com. “Not only that, our first four out five were on the road. I’m not playing, three rookies, new face in Essence (Carson), BG (Brittney Griner) coming off a long season in Russia. There’s a lot of little things that made it hard for us to get on a roll.

But Phoenix’s primary inconsistency resides on the other end of the court, specifically with its perimeter defense. Mercury opponents are shooting a blistering 46.6 percent from 3-point range while making 8.2 3-pointers per game – no other team is conceding more than 6.8 per contest. Those struggles contributed heavily to their 82-75 defeat at Chicago on Tuesday night when the Sky hit 12 of 23 from beyond the arc.

Bonner scored 28 points and Griner added 16, but no other Phoenix player finished in double figures. When the Mercury have had three or more players score 10 or more points, they have won both times, and they are winless when two or fewer finish in double digits.

Los Angeles (3-2) is minus a superstar of its own as Candace Parker continues to recover from a strained hamstring suffered in preseason. The Sparks are trying to wrap up their road swing with a winning record after holding off Minnesota 89-85 on Saturday. Riquna Williams scored 25 points and Chelsea Gray added 21 for Los Angeles, topping the 1,500-point mark for her career.

“I’m excited about our growth from each game on the road,” Gray told The Orange County Register as Los Angeles plays without Parker, Alana Beard and Maria Vadeeva. “Even though we lost our last game before this one (to the Sun), I’m excited about the way we’re progressing. … Today, we were focused on us, trying to come in here and getting a win and ending our road trip in a positive way.”

Gray has been the bellwether on this road trip for the Sparks, scoring 50 points combined in their two victories while being held to four in their defeat at Connecticut. The two-time All-Star is averaging 15.6 points and 4.4 assists, and will be looking to involve Marina Mabrey and Nneka Ogwumike on the perimeter against the Mercury – her teammates have made a combined 14 of 31 from deep.

The home team won all three games last year, with Los Angeles winning the season series but Phoenix emerging with an 86-78 victory in the most recent meeting Aug. 12 as Bonner had 31 points and Griner added 20 and 13 rebounds.