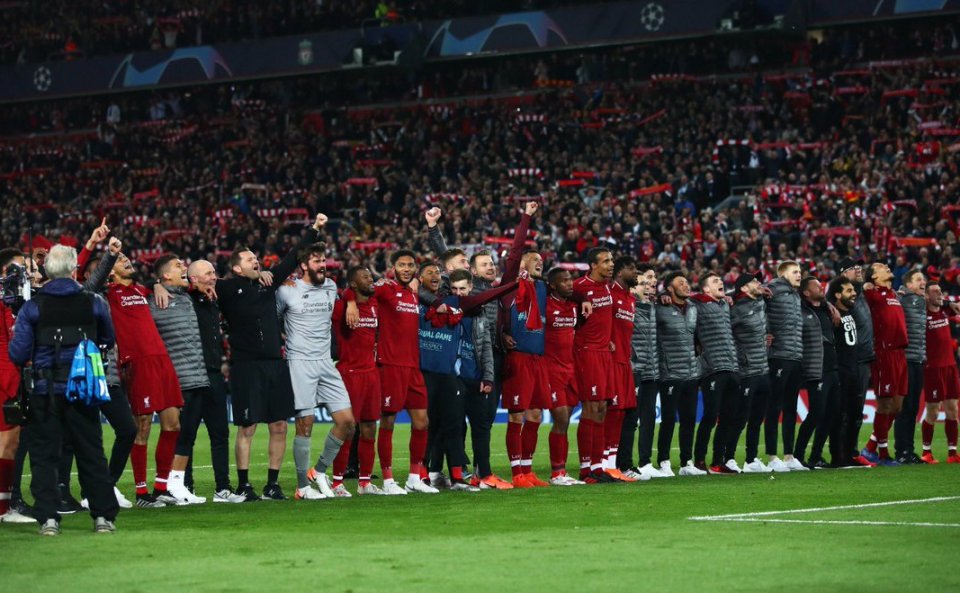 For two months, Liverpool have lived this credo in Premier League play: Win their match, hope Manchester City drop points, and after each passing week, renew that belief after the reigning Premier League champions match their victory.

Their seemingly endless reserves of hope refilled after a monumental mid-week comeback versus Barcelona to return to the Champions League final for a second straight year, Liverpool look to win their season finale Sunday versus Wolverhampton at Anfield while clinging to the belief Manchester City will drop points this one time to allow the Reds to claim their first Premier League title in club history.

Liverpool (29-7-1) have given all of themselves in this unprecedented title chase, matching Manchester City victory for victory over the last eight league matches as the two sides have swapped first and second in the table 14 times since March 10. Jurgen Klopp’s side are unbeaten in their last 16 league matches (12-4-0), but those eight dropped points may prove fatal in their bid to end a title drought that stretches back to 1990 in the First Division.

The Reds know the odds are against them, though they are at Anfield – where they have taken all but four of a possible 54 points going 16-2-0. Manchester City have the easier of the final matchday opponents in playing at Brighton and Hove Albion, but more importantly, the Citizens are one point better. A Liverpool victory is not enough, as Reds supporters in Merseyside also require the 17th-place team in the table with nothing at stake to pull off the shock scoreline of the Premier League season via draw or victory over Pep Guardiola’s side.

“It would be cool,” Klopp said at his Friday news conference when asked if Liverpool could pull off what would be a second stunning outcome in five days. “It was a week of, I’m not sure miracles, but of big football moments. From our point of view, there could be a big football moment for us as well on the weekend. It would be nice. The week is not over yet, Sunday counts to this week, not for next week. So, of course we go for that.

That was what Liverpool did Tuesday, when the cauldron of Anfield helped create another magical European night as the Reds overturned a 3-0 first-leg deficit with a mesmerizing 4-0 thrashing of Barcelona. Divock Origi and substitute Georginio Wijnaldum each had braces as Liverpool – playing without injured star forwards Mohamed Salah and Roberto Firmino as well as midfielder Naby Keita – put together a relentless effort that tore Lionel Messi and the Catalans asunder.

Wijnaldum, angry Klopp did not include him in the starting XI, entered out of necessity at halftime when left back Andy Robertson was forced off with a calf injury and James Milner slotted into the back four. The Dutch international fueled the comeback Origi started, scoring his two goals 120 seconds apart to level the aggregate 3-3 with 34 minutes to play.

Then it was Origi, a bit player who will be remembered for having Liverpool’s most timely goals this term – he won the Merseyside derby over Everton at home in the 96th minute in December and left it late last weekend at St James’ Park in their 3-2 win over former Liverpool boss Rafa Benitez and Newcastle United – again delivered when the Reds needed it the most.

His second came about through heady play from 20-year-old right back Trent Alexander-Arnold – dropped in Liverpool’s first-leg defeat at Camp Nou for Joe Gomez. Taking full advantage of a lapse in concentration by Barca ahead of a corner kick, his quick restart resulted in Origi being unmarked for his goal from close range in the 79th minute that stood as the winner.

It also punched Liverpool’s ticket to Madrid for the Champions League final against Big Six rival Tottenham Hotspur, who themselves had an equally improbable comeback 24 hours after the Reds gave themselves another opportunity to win a sixth European title.

The good news for Liverpool is Salah, Robertson, and Jordan Henderson should all be available for this game, with Salah – who also leads the race for the Premier League Golden Boot – having suffered a head injury before Origi’s late heroics at Newcastle. Firmino has been ruled out with a small muscle tear, while Keita is done for the season with an adductor injury.

“Unfortunately, Robbo could deal with the pain but only the rest of his body couldn’t because he couldn’t really activate the muscle anymore, some nerve hit or whatever. They should be fine (for Sunday).”

Robertson and Alexander-Arnold both are sitting on 11 assists, which ties a Premier League record for defenders originally set by Andy Hinchcliffe in 1994-95 for Everton and matched by fellow Toffee Leighton Baines in 2010-11.

Wolverhampton (16-9-12) have wrapped up seventh in the table, and the promoted side have the chance to start next season in the qualifying rounds of the Europa League if Manchester City defeat Watford for the FA Cup trophy next weekend at Wembley.

A victory at Anfield – not completely improbable since Wolves have three wins in their last six visits, including a pair this decade – would give Wolves 60 points – the fifth-highest total of a promoted club in the Premier League era and most since Ipswich Town accrued 66 in 2000-01.

Additionally, Wolverhampton have played some of their best football against the Big Six sides, taking 16 points from 11 matches (4-4-3). Wolves are 1-3-1 on the road in those contests, losing only at Manchester City and beating Tottenham Hotspur.

“We have an improving squad and we cannot be measured by table. We will judge ourselves by how we did things, how we compete, how we play how we improve; but the improvement is natural and obvious. This is what we aim for, not the table.” 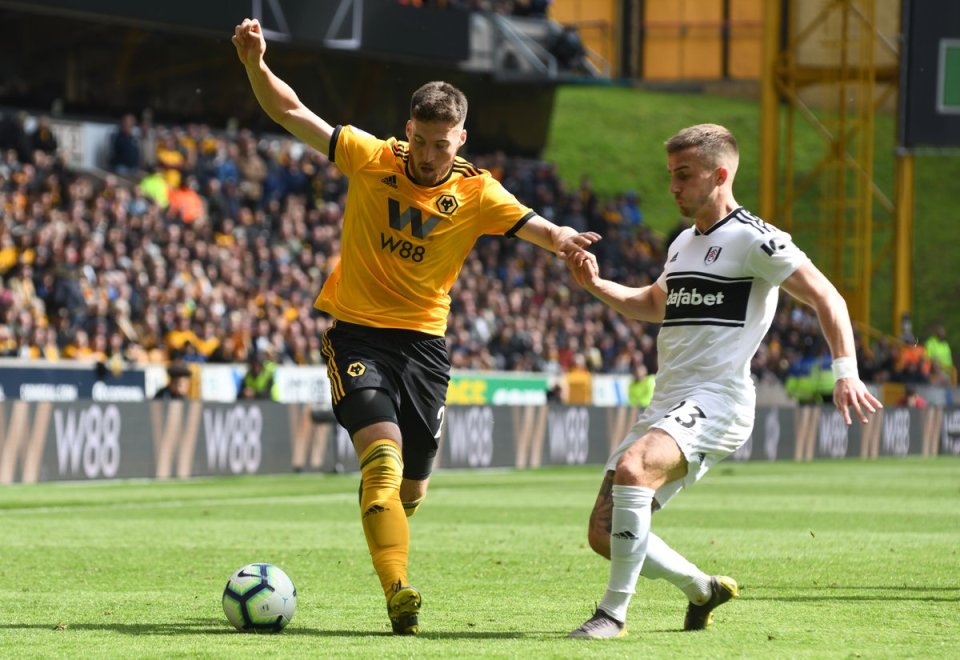 Wolves have won three on the trot following a 1-0 victory over relegated Fulham at Molineux on April 4. Leander Dendoncker’s goal on 75 minutes separated the sides, with fullback Matt Doherty notching his seventh assist. The Ireland international also has eight goals in a standout season and offers an intriguing challenge to Robertson on the right flank in Wolverhampton’s 3-5-2 set-up.

Nuno has raised some eyebrows with talk last week he may give third-choice keeper Will Norris his first minutes of the season in either last weekend’s match or this one. No. 1 Rui Patricio started last Saturday at Molineux, which means if Norris is going to get minutes in 2018-19, this is the match since John Ruddy backstopped Wolves to their FA Cup semifinal appearance.

“There are three goalkeepers but only one place. Last season, Will had a chance to play in the Carabao Cup and the FA Cup,” Nuno told the Express & Star on May 2. “Things have changed this season, but Will’s behaviour has not changed. The way he commits himself to the work has not changed. It’s even improved because the group know each other better.

“We must give Will a chance. Hopefully, I will try. I would like to finish the season with all the players having minutes in the Premier League. I would really, really like that.”

Liverpool ran out 2-0 winners at Molineux in the reverse fixture during the busy holiday period as Salah scored in the first half and set up a goal by Virgil van Dijk in the second. Wolves gained a measure of revenge by knocking Liverpool out of the FA Cup less than three weeks later with a 2-1 victory in the third round.

First things first: given the absolute white-hot intensity of this title race, it would border on criminal if Nuno gave Norris a run-out in this match. While the sentiment and commitment to his player is noble, this match has exponentially more at stake than a third-choice keeper getting 90 minutes to say he got 90 minutes.

Simply put, it’s bigger than Wolverhampton. One has to believe Nuno knows this. Now if Liverpool score three in the first half without reply, then sure, throw Norris on at halftime and everyone gets what they want.

The two big factors at play are how much Liverpool have left to give after Tuesday’s landmark victory, and whether Wolverhampton are already on vacation mode with nothing to play for with seventh place wrapped up. Having a fresh Salah, at least in terms of legs, is a huge boost for the Reds. One goal by the Egypt international, and he almost certainly wraps up the Premier League Golden Boot unless Sergio Aguero runs riot at Brighton.

The Robertson-Doherty matchup between two of the top wide backs in the Premier League will be something to watch, especially considering both Robertson and Alexander-Arnold are going to be whipping crosses, free kicks, and corner kicks into the penalty area to record that record-setting 12th assist.

Liverpool bossed the reverse fixture, holding possession for 60 percent of the match but also getting 10 corner kicks to Wolves’ one, which implies there will be opportunities for both Reds fullbacks. Additionally, this match should have the style of play Liverpool need after taxing themselves versus Barcelona — there were only 10 fouls whistled by referee Craig Pawson, who did not issue any cards.

With nothing to play for save pride, Wolverhampton could nab a unique achievement with a result. The promoted side have taken at least one point off the other five of the Big Six clubs, and while the FA Cup win is nice, it did come at the expense of a largely overturned Liverpool side.

The other good news is the teams finishing level on points is the most unlikely scenario of Sunday’s permutations since it requires a Liverpool draw and a Manchester City loss. Not counting their head-to-head meetings, the only match day neither team recorded a win was Match Day 24 back in late January when City lost at Newcastle United and Liverpool were held to a 1-1 draw at Anfield by Leicester City the following day.

It is somewhat difficult to fathom Liverpool can: Close the season on a nine-game winning streak, 17-match unbeaten run in league play, become the third team of the Premier League era to amass 30 league victories, and record the third-highest point total in Premier League history, yet still end up one point short.

Nuno will undoubtedly be a man in demand for media appearances leading up to the Champions League and Europa League finals since Wolverhampton have defeated all four finalists — a feat they share with only Manchester City.

But this day, however, is about Liverpool showing the heart and class of champions, even if it is not meant to for them to be Premier League champions yet again.