It all comes down to a final 90 minutes at AMEX Stadium on Sunday for Manchester City, who will repeat as Premier League champions should they defeat Brighton and Hove Albion. 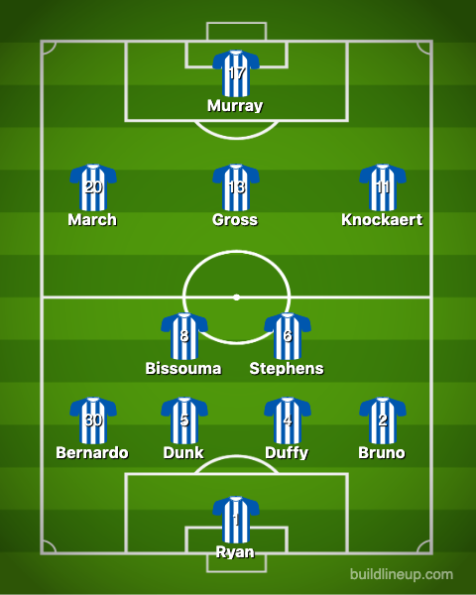 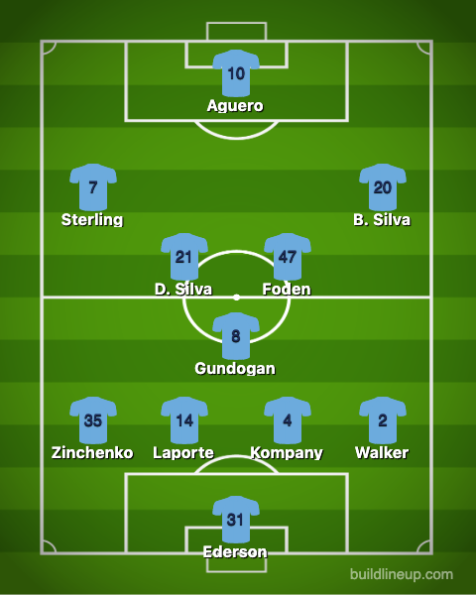 Last season, Manchester City (31-2-4) became the first centurions in English football, winning the Premier League title at a canter. While the Cityzens will fall short of that total – a victory Sunday will give them 98 points but also perhaps the hardest-earned title in English football history. It would also make them the first side to repeat as champions since eternal rivals Manchester United completed a “three-peat” in 2009.

Manchester City enter this contest one point better than Liverpool, who are favourites to win their season finale versus Wolverhampton at home. The two sides have traded the Premier League lead 14 times since March 10, with neither side dropping points in their last eight matches. That run is part of a current 13-match winning streak for Pep Guardiola’s side, who overturned a seven-point deficit to Liverpool starting with their 2-1 home win over the Reds on Jan. 3.

“First of all, it’s a dream to be here,” Guardiola said at his Friday news conference as his team remains in the hunt for a domestic treble and play Watford in the FA Cup next Sunday at Wembley. “I didn’t expect this when we were seven points behind this Liverpool, so it’s a dream. Of course, now is not the moment to say how good we’ve done we have the chance to be champions.

“Okay if it happens it will be nice but nothing is going to change. The fact we’ve done incredibly well all season means in last two games we have two titles, two finals. It’ll be tough. If the game is going bad we will be calm, we have to have a plan and follow a plan like we have done all season.”

In the seven previous Premier League title races that ended with the top two clubs separated by two or fewer points or on goal difference, the 2011-12 Manchester City squad have the previous longest season-ending winning streak at six matches.

Regardless of Sunday’s outcomes, it will mark the first time in Premier League history the top two clubs will finish with at least 90 points. And wins by both sides would result in Manchester City and Liverpool having the second and third-highest points total in the Premier League era – trailing only the 100 City accumulated last term.

City have won 17 of their last 18 overall, their lone blemish a 2-1 loss to former Liverpool boss Rafa Benitez and Newcastle United at St James’ Park on Jan. 29. A victory would give Manchester City the longest season-ending win streak in the Premier League era, eclipsing the 13 Arsenal piled up closing out 2001-02.

They would also be the first champions to go unbeaten in their final 14 league matches since Chelsea went 29 without a loss in 2004-05, though Liverpool can finish unbeaten in 17 with a victory or draw versus Wolves.

The other numbers that factor heavily in this Premier League title race for City are the slightest of distances – 1.12 centimeters and 2.91 centimeters. The former is the distance the ball had left to travel before John Stones’ goal-saving clearance in that win against Liverpool in January, the latter the distance Sergio Aguero’s goal cleared the line in City’s 1-0 victory over Burnley a fortnight ago.

Two more numbers that figure prominently: 4 and 27. The four can be found on the shirt of Manchester City centre back and talisman Vincent Kompany, whose 27-yard wonder goal in the 70th minute of Monday’s 1-0 victory over Leicester City kept the Cityzens atop the table by this one-point margin.

An integral part of City’s previous three Premier League title runs following his signing for a mere £6 million from Hamburg in 2008, the Belgium international let fly with a perfectly placed right-footed thunderbolt – clocked at 81.2 miles per hour according to the Times of London – that swerved over the diving Kasper Schmeichel and into the upper right-corner 90 in the 70th minute.

A fine time for his first goal from outside the penalty area.

“It was incredible. Football is unpredictable and sometimes we score goals in that way,” Guardiola said post-match. “There are important players in the club. Vinny has been here 10 years, unfortunately sometimes injured but when fit incredible player. He is real defender with personality and a leader, I am happy for him, for the club and everybody.”

“I always feel in big moments like this I’m going to do something,” Kompany told Sky Sports before adding jovially, “Today was a little bit of frustration, everybody was saying ‘Don’t shoot!’ and I could really hear it. And it was annoying me and I said, ‘Hold on a second, I’ve not come this far in my career for young players to tell me I can take a shot or not.'”

In the case of the strong getting stronger for this match, Guardiola confirmed playmaker Kevin De Bruyne would be available after missing the previous three matches with a hamstring injury. Central midfielder and defensive linchpin Fernandinho has been ruled out with a knee injury, leaving Ilkay Gundogan to deputise once more.

Brighton and Hove Albion (9-9-19) will aspire to be little more than the final footnote of City’s back-to-back title-winning seasons, but they have nothing to play for save pride. The Seagulls were assured a third consecutive season in the top flight with Fulham’s 3-2 victory over Cardiff City last weekend. Those two sides, along with Huddersfield Town, will be relegated to the Championship, which lifts a huge weight off the collective shoulders of Chris Houghton’s club.

“A little bit of job done. If we’d been asked at the start of the season would we settle for retention in the Premier League and getting into the (FA Cup) semifinals, which was very exciting for this football club, I think we would have taken it,” Houghton said at his Friday press conference. “Certainly there have been some lows. We are very aware of the periods we have had and where we needed to do better and it was probably in the home games where we’d done so well last season where we didn’t pick up the points we needed to.

“That was a difficult part of the season for us. We’ll always reflect on it but the reality is we haven’t finished dramatically too far away from where a level of club in a second season in this division should finish.”

Brighton are winless in their last eight league matches (0-3-5) but have played Newcastle and Arsenal to draws in their last two contests after a 1-1 draw at the Emirates last Sunday. Glenn Murray converted from the spot just after the hour to cancel a first-half penalty from Pierre-Emerick Aubameyang, putting a huge dent in Arsenal’s top-four hopes.

This match also marks the end of 38-year-old talisman Bruno’s career, with the defender calling time on his career Friday. He has been with the club since 2012, and Sunday will be his 235th and final match with the club.

“I think it’s a decision I took a few months ago but you have to process everything,” he told the Brighton and Hove Independent. “I said already I wanted to let everyone know when the team was safe and sound in the Premier League. That was really important. It was a difficult decision but at the same time it was quite easy.”

City are seeking their second consecutive Premier League double over Brighton after a 2-0 victory in September on goals by Raheem Sterling and Sergio Aguero. They also ended the Seagulls’ FA Cup run with a hard-fought 1-0 win at Wembley last month, with Gabriel Jesus’ goal four minutes in separating the sides.

There have been times this title race has not been easy on Manchester City, who were chasing an unprecedented quadruple haul of trophies until last month. There also have been times they have not made it easy on themselves, something that has happened to a degree in their last three league matches.

Yes, City have recorded clean sheets in those games and monopolised possession in all of them. But it took 54 minutes to get their first goal at Old Trafford versus United, 63 minutes for Aguero to eke one over the Burnley goal line, and of course, 70 minutes for Kompany to stripe one from distance. It does not feel like the issue is nerves, but simply the stress of needing to win in each match as opposed to simply not losing.

That is what has made this Premier League title race so riveting — both managers and their players fearing, nay, KNOWING even two dropped points would be two too many in their bid to lift the trophy Sunday. To live that out for two months worth of football — before factoring in the other tracks City have run simultaneously in Champions League, Carabao Cup, and the FA Cup — is mind-boggling.

That is why it is foolish to think Manchester City will bottle Sunday. The aesthetic beauty of their offence sometimes hides a ruthless goal-scoring streak that runs throughout their attack from Aguero down the line. A victory would give them 98 points, which means they will have dropped 16 points all term, another astounding statistic  considering their best all-around player — De Bruyne — has played less than 30 percent of the possible 3,370 minutes in league play.

The 198 points they should have over the last two seasons when the final whistle blows is also a mind-bending number. The only side to even have a faint sniff of that lofty total are Jose Mourinho’s Chelsea from the middle of the last decade when they had 95 in 2004-05 and followed it up with 91 more defending their title. Even Sir Alex Ferguson’s best back-to-back title-winning sides at United topped out at 177 in 2007-08 and 2008-09.

Though there is nothing at stake for Brighton aside the motivation of sending out Bruno a winner in grand style in his final match, he and the Seagulls will not make this easy on City. They gamely held out at White Hart Lane against Tottenham Hotspur three weeks ago until Christian Eriksen fired home from distance on 88 minutes, and Brighton have conceded only three goals in their last four matches.

The problem is Houghton’s side have scored just two in their eight-match winless run, and there is only so much defending they can do before the eventual break down. With so much at stake, however, that is likely to come sooner than later, and with it, will be Manchester City successfully repeating as Premier League champions.