Note: This article can also bee seen here on US-Bookies.com.

The carnage. Oh, the absolute carnage.

Everything anyone thought about NHL playoffs was destroyed in stunning fashion during the first round.

Niedermayer? Well, you get the idea. 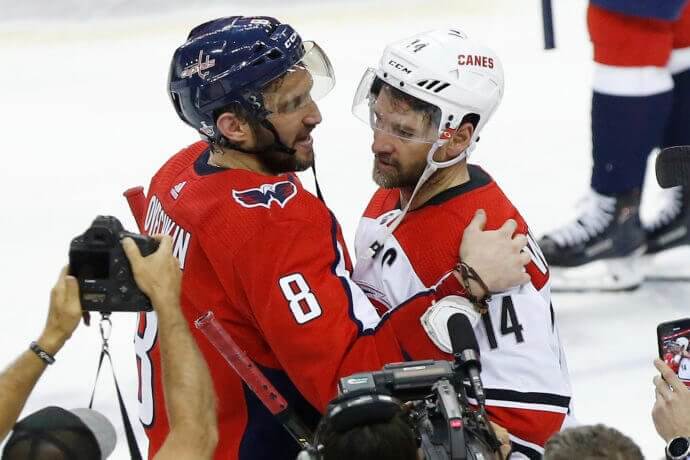 Only the upcoming Battle of Winterfell may have a longer list of high-profile casualties. Look at this list:

Washington Capitals – The no-longer defending Stanley Cup champions, the Capitals squandered a chance to close out the Hurricanes in Carolina in Game 6, coughed up a pair of two-goal leads in Game 7 and squandered a power play in the second overtime before “Mister Game 7,” Justin Williams set up Brock McGinn’s series winner that sent Alex Ovechkin and company packing.

Tampa Bay Lightning – The Presidents’ Trophy winners who had franchise records of 62 wins and 128 points were rendered meaningless as the Columbus Blue Jackets not only upset the Stanley Cup favorites but stormed past them in four games. For the record, that sweep paid out +5,000 for those brave/foolish enough to make that pick.

Vegas Golden Knights – There will be no feel-good sequel for the defending Western Conference champions who reached the Stanley Cup Finals in their inaugural season. A controversial major penalty in Game 7 at San Jose resulted in a stunning rally by the Sharks, and though the Golden Knights recovered to force overtime, it was not to be for Vegas, which crapped out near the end of the first extra period.

Calgary Flames – The top seed in the Western Conference, the overachieving and Pacific Division champion Flames had little offense after their 4-0 victory in Game 1 and no answer for the Avalanche’s big line of Gabriel Landeskog, Mikko Rantanen and Nathan MacKinnon, who snowed them under in five games.

Pittsburgh Penguins – While not an upset per se in losing to the higher-seeded Islanders, no one expected the 2016 and 2017 Stanley Cup champions to be swept aside in four games. Sidney Crosby was held to one point, and the rapid exit has raised questions over whether it may be time for the Penguins to rebuild around the generational superstar.

So what is in store for the second round? Your guess is as good as anyone else’s. 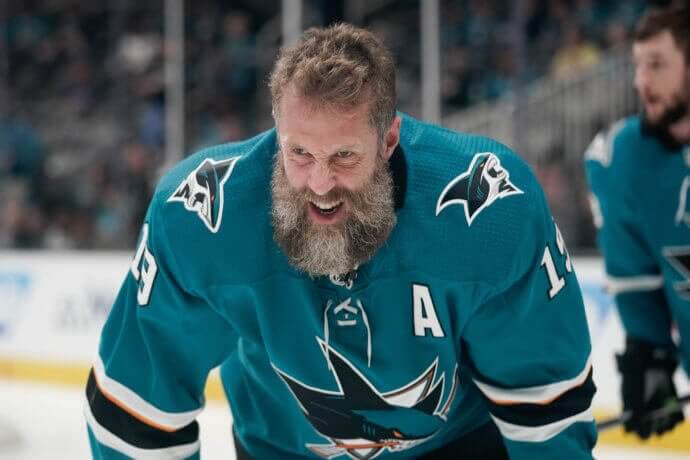 San Jose Sharks(-152) vs. Colorado Avalanche(+123) – After one of the most stunning Game 7 comebacks in NHL playoff history, the Sharks (+185 Western Conference, +425 Stanley Cup) not only are in the second round, they now have home-ice advantage through the remainder of the playoffs.

San Jose may have to find its way without captain Joe Pavelski early in this series after the concussion he suffered in Game 7 that served as a rallying point for the Sharks, but there is still plenty of scoring punch in Timo Meier, Logan Couture, and veteran Joe Thornton. The Sharks also have a pair of offensive defensemen in Erik Karlsson, who had nine assists versus Vegas, and Brent Burns, who totaled two goals and five assists in San Jose’s three-game sweep of Colorado in the regular season.

The Avalanche (+360/+850) still need to prove they have offense beyond their big scoring line of Rantanen, MacKinnon, and Landeskog, but goaltender Philipp Grubauer was a steady presence in the net, posting a 1.90 goals-against average and .939 save percentage. His play will go a long way in determining if Colorado reaches the conference finals for the first time since 2002. 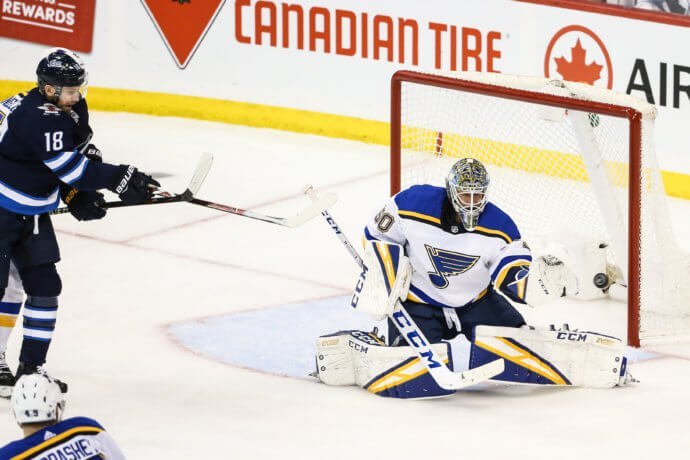 St. Louis Blues (-167) vs. Dallas Stars (+155) – The Blues (+210/+475) got timely goals from Jaden Schwartz, who scored the winner in Game 5 and had a hat trick to win Game 6, and teamed up with linemates Brayden Schenn and Oskar Sundqvist to net seven of the team’s 16 goals in eliminating Winnipeg. Craig Berube’s team still has one of the biggest question marks in the postseason – rookie goaltender Jordan Binnington – but he came up with the needed saves to win Games 5 and 6 after leading the Blues’ charge to the playoffs in the regular season.

Dallas (+360/+800) hoped its acquisition of Mats Zuccarello at the trade deadline would make a difference come postseason, and the veteran proved his worth with three first-round goals as the Stars disposed of the Central Division champion Nashville Predators in six games after falling behind 2-1 in the series. Zuccarello gives the Stars scoring beyond their big line of Jamie Benn, Tyler Seguin, and Alexander Radulov as the trio accounted for six goals and 12 assists.

Stars goaltender Ben Bishop saw a lot of pucks in the first round – he faced 36.3 shots per game – but had a 1.89 goals-against average and .945 save percentage to go with five games of 30 or more saves. He had 47 in the series-clinching Game 6 overtime win and a 1.69 GAA in three games versus the Blues this season. The Stars won three of four games between the teams, with Seguin and Benn combining for eight of the 13 goals scored. 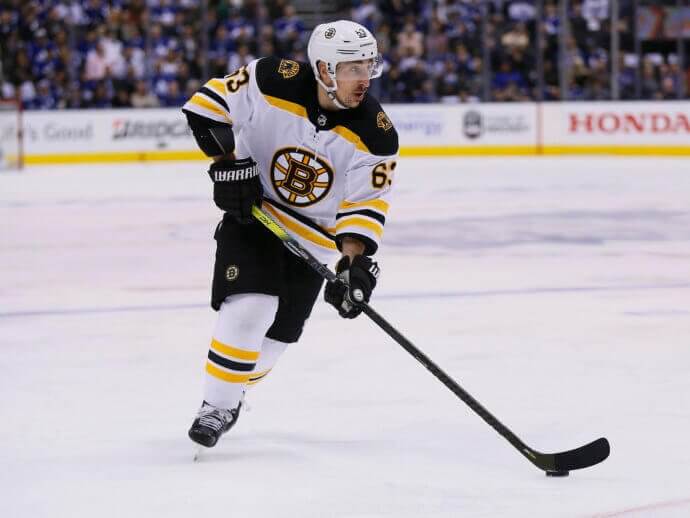 Boston Bruins (-157) vs. Columbus Blue Jackets (+127) – The Bruins (+175/+400) have become the Stanley Cup favorites after the first-round carnage by virtue of their offensive depth with 30-goal scorers Brad Marchand, David Pastrnak, and Patrice Bergeron along with 20-goal scorers David Krejci and Jake DeBrusk. The quintet accounted for 12 of Boston’s 23 first-round goals as the Bruins outlasted the Toronto Maple Leafs in seven games, rallying from a 3-2 series deficit.

To put Columbus’ stunning sweep in some sort of perspective, the Blue Jackets outscored the Lightning – the NHL’s highest-scoring team by 36 goals – by a 19-5 count after falling behind 3-0 in the first period of Game 1. The burden of having not won a playoff series in franchise history finally off their back, John Tortorella’s team should be loose and relaxed playing with house money, and the goaltending battle between Sergei Bobrovsky and Boston counterpart Tuukka Rask should be entertaining.

An interesting side note to this series is the teams did not meet until after the NHL trade deadline, so the Bruins have seen the new-look Blue Jackets after they acquired Matt Duchene and Ryan Dzingel to help out top scorer Artemi Panarin. They traded lopsided victories that saw each goaltender chased once. Marchand had four goals and three assists in the three games versus Columbus, and Duchene scored goals in all three games versus Boston after joining the Blue Jackets from Ottawa. 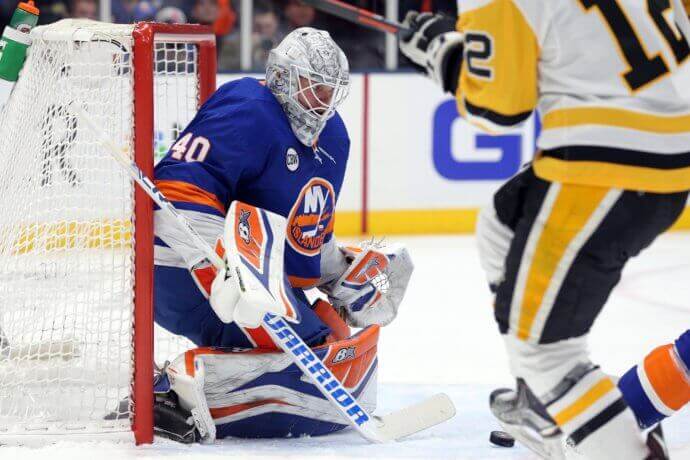 New York Islanders (-122) vs. Carolina Hurricanes (+100) – While Islanders coach Barry Trotz watched his former team lose to the Hurricanes, Game 1 will be a classic case of momentum versus rest that could set the tone of this series. The Isles will have gone 10 days between games following their sweep of Pittsburgh, while the Hurricanes are on rhythm of playing every other day following their seven-game war of attrition in eliminating the defending champion Capitals.

The overwhelming bulk of New York’s scoring came from its top two lines, with Jordan Eberle, Josh Bailey and Brock Nelson combining for 10 of the 13 goals. The Islanders do not have a superstar defenseman but had arguably the best goaltender of the first round in Robin Lehner, who allowed just six goals on 136 shots with stellar marks of a 1.47 GAA and .956 save percentage.

The series victory could prove to be a Pyrrhic one for Carolina, though. Micheal Ferland did not play the final four games of the first round with an upper-body injury, while rookie and 20-goal scorer Andrei Svechnikov was also sidelined Games 4 through 7 after being knocked out by Ovechkin in a first-period fight in Game 3. Fellow rookie Warren Foegele led the ‘Canes with four goals in the first round after scoring 10 in 77 games during the regular season.

The interesting side note to this game: Lehner did not appear in any of the four games versus Carolina in the regular season as Trotz started Thomas Greiss in those games. New York won the first three games before Carolina won the most recent matchup, and ‘Canes No. 1 goalie Petr Mrazek only played in two of the four matches, going 0-1-1 while allowing just four goals.