If Ole Gunnar Solskjaer keeps this up, Manchester United will have a very short coaching search since they won’t need to look outside Old Trafford.

The caretaker manager looks for his seventh win in as many matches since taking charge as United host Brighton and Hove Albion on the road Saturday. 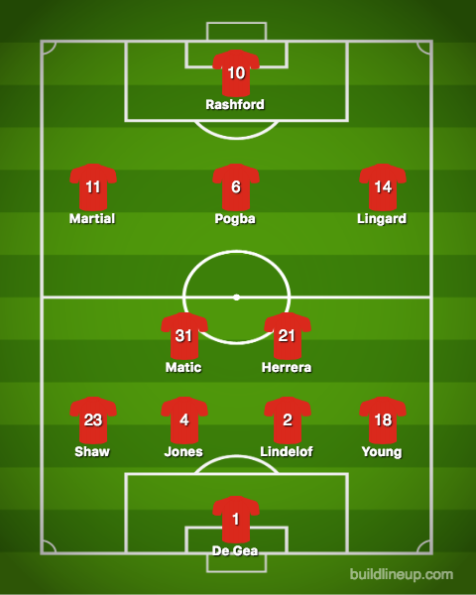 United’s first five matches with their former Norwegian striker in charge were a means of stabilising the storied franchise following the sacking of Jose Mourinho. The Red Devils took care of business with four league wins on the trot followed by an efficient FA Cup victory over Reading.

Last weekend’s match at Wembley versus Tottenham Hotspur was the first real referendum on Solskjaer’s coaching acumen, his counterpart Mauricio Pochettino also considered a potential suitor for the United job Solskjaer has openly stated he wants on a full-time basis.

And the Norwegian passed with flying colours as United (12-5-5) recorded a 1-0 victory over Spurs, moving within six points of the fourth and final Champions League spot while pulling level on points with Arsenal for fifth. Solskjaer opted to match Pochettino’s diamond in midfield with one of his own, using Jesse Lingard as a false nine to open up space behind Tottenham’s defence, which contributed to Marcus Rashford’s goal on 44 minutes.

“The manager told us that at the beginning of the game it would be difficult to make short passes,” midfielder Ander Herrera told United’s official website. “He told us that it would be easier for us to switch the play and to look – almost without looking – to the other side of the pitch to switch the ball, because that is where we were going to find spaces.

“We scored like that, so thank you to the game plan as well.”

In the second 45 minutes, the match belonged to David De Gea, who again rescued points for United with a standout performance. He finished with 11 saves, thwarting Spurs striker Harry Kane thrice and Dele Alli twice.

“Every one of them (my saves) was important for the team to help keep a clean sheet, to help the team to win so every save was important,” De Gea said. It was a tough game for every player, we were attacking well, we create chances and this is United.

“They (Victor Lindelof and Phil Jones) have been top too, but not just them, the whole team, we have to defend from the striker to the goalkeeper so it was a great performance in the defensive way and we need to keep this level, keep winning games and fight for the top four.”

Solskjaer became the first United manager to win his first six games in charge, bettering the mark established by Sir Matt Busby in the 1946-47 season. Once more he found the best in Pogba, whose 45-yard pass set up Rashford for his match-winner.

The World Cup winner has four goals and four assists since Solskjaer took over while Rashford has three goals in his last four matches and four since the managerial change.

Brighton and Hove Albion (7-5-10) have a chance to complete their first double over Manchester United at any level since they recorded a 3-2 victory in the reverse fixture in August on first-half goals by Glenn Murray, Shane Duffy and Pascal Gross.

While United’s outlook has changed since the match. The Seagulls continue to be a stubborn outfit under Chris Hughton and had their four-match unbeaten run in all competitions end with a tough 1-0 loss at home to Liverpool last weekend.

Gross committed the foul on Mohamed Salah that led to the match’s only goal on 50 minutes, a bitter result for a Brighton side that played well and compact despite ceding nearly 70 percent position to the Premier League leaders. The effort has also provided hope among Albion they can grab a result at the Theatre of Dreams.

“Liverpool and Manchester United are the matches which are special in the Premier League, and you have important matches against top teams all the time,” defender Martin Montoya told the club’s official website. “I can see the team is growing since the start of the season, as we look more solid, physically stronger, and better individually.

“We are improving and at Manchester we will go out giving it our all to get a result.”

Brighton will also be sporting a different look compared to the first meeting, with Hughton using a 4-3-3 that will look more like a 4-5-1 formation with the expectation United will see a lion’s share of the possession. The move has most benefitted Jurgen Locadia, who had two goals and an assist in the four matches before the setback to Liverpool.

Also different will be the goalkeeper as David Button continues between the sticks while first-choice keeper Mathew Ryan plays for Australia in the Asian Cup. Button has helped Albion claim four points in his three league starts and recorded a clean sheet versus Everton.

Manchester United have recorded four consecutive clean sheets at home versus Albion since that draw, with the lone league contest a 1-0 victory last term on an own goal by Seagulls defender Lewis Dunk. Romelu Lukaku and Nemanja Matic provided the offence in the most recent contest there in the FA Cup quarterfinals last March.

Per Bet365, Manchester United are firm 3/10 favourites to make it seven wins on the spin since Solskjaer took over, and Brighton are 11/1 underdogs to pull off the double. The odds of the sides splitting the points are 19/4.

Despite a five-goal outburst in the first meeting, oddsmakers aren’t overly convinced this will be a high-scoring affair, offering 8/11 action on over 2.5 goals compared to 11/10 for under. There are also 4/6 odds on at least one clean sheet compared to 11/10 that both teams will score.

Despite the likelihood he will be coming off the bench once more, Lukaku is still the top choice for first goal-scorers at 11/4. He is followed by Anthony Martial (4/1), Alexis Sanchez (9/2), and the in-form duo of Pogba and Rashford — who are both 5/1. Lingard is a 13/2 option, while Murray is the top pick for Brighton at 10/1 to make it 0-1.

Lukaku is the only player with better than even money odds to score over the course of 90 minutes at 8/11, with Martial just off that line at 11/10. Sanchez is a 5/4 pick while Pogba and Rashford are again linked together at 7/5. Juan Mata has 12/5 odds to pick up a goal, while Murray is a 3/1 option. Seagulls teammate Florian Andone checks in at 9/2, and Locadia is another step back at 5/1.

Solskjaer has passed every test thrown at him through these first six matches with flying colours, and this contest presents a new one: can United avoid a letdown after a big result? Additionally, this has the feel of a “trap game” considering their next contest is a mouth-watering fourth-round FA Cup tie at the Emirates versus Arsenal that will undoubtedly turn into a “who’s doing better among new managers” debate for the run-up.

Still, United continue to make up ground in a push for a top-four spot, and a win here ahead of that contest with Arsenal — United trail the Gunners by just two in goal difference — would send a message to the north London side they are not going away any time soon.

Right now, Pogba and Rashford are carrying United’s offence, but the other key component of United’s success is continuity. Solskjaer has settled on a first XI and substitution patterns that promote consistency in the side, and he has been rewarded by both starters and reserves — evidenced by their win at Newcastle.

Albion are not far off from the top half of the table, and for a side who have taken just four points off the Big Six, they have proven difficult to break down. Four of their five losses against those teams have come by one loss, and the worst of them was a 2-0 setback to Manchester City. Hughton’s squad may lack a consistent offence — but they are well-drilled and disciplined.

With the likelihood Albion will have nine behind the ball for this match as their 4-3-3 retreats into a 4-5-1, it means the dirty work will fall to fullbacks Luke Shaw and Ashley Young to pump crosses into the box to create some chaos and get a greasy goal for some separation.