2019 has gotten off to a rotten start for Liverpool.

Denied in a bid to run away with the Premier League race and sent tumbling out of the FA Cup, Jurgen Klopp’s side look to stop the rot Saturday with a tricky tie at the AMEX against a Brighton and Hove Albion side playing some of their best football of the season. 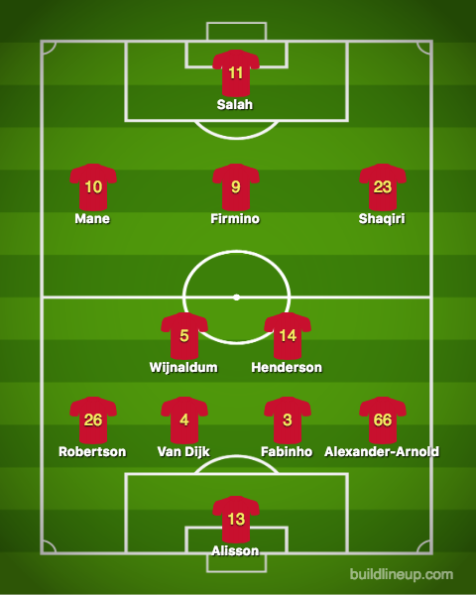 Liverpool (17-3-1) were thwarted in their chance to open a 10-point chasm on the reigning titleholders as they fell 2-1 at Manchester City on Jan. 3. The Reds were unfortunate not to go up a man just after the half-hour when Vincent Kompany was only booked for a harsh challenge on Mohamed Salah, but they were also chasing the match for most of the 90 minutes.

Roberto Firmino gave Liverpool hope for a point with an equaliser on 64 minutes to cancel out Sergio Aguero’s first-half goal, but Leroy Sane scored eight minutes later for the hosts, who clawed within four points of the top spot and overtook Tottenham Hotspur – another two points further adrift – for third.

The intensity of that clash led Klopp to overturning all but two of his starting XI for Monday’s third-round FA Cup tie at Wolverhampton. An omen of things to come came in the sixth minute when centre back Dejan Lovren – a position Liverpool are already thin at – was forced off with a hamstring injury on six minutes.

The teams traded goals around halftime, but Ruben Neves’ long-range strike on 55 minutes proved decisive in a 2-1 defeat to the promoted side, leaving Liverpool with “just” the Premier League and Champions League trophies to play for between now and June.

“We have to make sure we bounce back and look at where we can get better,” midfielder James Milner told the club’s official website. “You’re never going to go a full season without having blips. I think at the start of this season we weren’t playing our best but we were getting results. (It’s) back-to-back defeats now, which really isn’t good enough for us, but you have blips in a season. It’s about how you respond.

“I think you’ve seen the character in the squad in the last few years, and the players we have, to know we will bounce back. We have to show that, though. It’s easy saying it in an interview, we have to do it on the pitch at the weekend.”

How Klopp fills Lovren’s absence at centre back will be something to watch. The Croatia international was behind Joe Gomez on the pecking order of centre back partners with Virgil Van Dijk, who himself is questionable for this match due to an illness.

Gomez is out injured, and while the FA Cup was an opportune moment to blood 16-year-old Ki-Jana Hoever as an understudy there, the teen is not expected to be on a league team sheet any time soon. The most likely option for Klopp is to drop defensive midfielder Fabinho into a pairing with Van Dijk should he be available.

Whether this is indeed a “blip” as Milner says or something larger could rest on Liverpool’s attacking trio of Firmino, Salah and Sadio Mane. Firmino finally found his form with his hat trick versus Arsenal and followed that up with a well-done finish versus City.

Salah and Mane both scored against the Gunners, so they are not slumping, but whether the trio can re-ignite at last term’s pace to take the pressure off Van Dijk and the back line remains to be seen.

Brighton and Hove Albion (7-5-9) have quietly put themselves in solid mid-table footing and are 13th on 26 points, 10 clear of the drop. The Seagulls are 2-2-0 in their last four matches in all competitions and avenged their most recent defeat Saturday with a 3-1 win at Bournemouth in a third-round FA Cup tie.

Anthony Knockaert’s first goal in 12 matches swung that match in Brighton’s favour minutes after Bournemouth should have taken the lead through Lys Mousset. Yves Bissouma added his first goal of the term three minutes after Knockaert struck, and Florian Andone completed Brighton’s first three-goal effort since early December with a header on a corner just after the hour.

“I’d certainly rather be going into the game in good form than in bad form,” manager Chris Hughton told the club’s official website. “At the moment, playing at home to Man City or Liverpool are the toughest games you can play. They will be big favourites, as everybody would imagine, and it will be us doing as well as we can on the day.

“In this game, people won’t expect us to get anything and anything we do get will be a bonus.”

Hughton was not exempt from injury woes for this match as left back Bernardo has been ruled out with a hamstring injury. Winger Jose Izquerido is also sidelined with a knee injury while attacking winger Ali Jahanbakhsh and first-choice keeper Mat Ryan are  representing Iran and Australia, respectively, at the Asian Cup.

The Seagulls showed plenty of fight in the reverse fixture, falling 1-0 at Anfield where Salah slotted home on 23 minutes. Brighton nearly nicked a point late, but Pascal Gross’ 88th-minute header was stopped by Alisson.

Liverpool have won all three top-flight matches since Brighton won promotion last season and rolled to a 5-1 victory at the Amex in 2017-18 behind a brace from Firmino.

Per Bet365, Liverpool are solid 3/10 favourites to get back on track in league play and pick up a victory. There are 5/1 odds on a draw, and Brighton are 10/1 underdogs to pull off a shock scoreline with a second-choice keeper and extend Liverpool’s recent misery.

There are 8/11 odds on the teams combining for more than 2.5 goals while there are 11/10 odds on the teams being under that threshold for the second time this season. Oddsmakers are also expecting another clean sheet in Liverpool’s favour, with 8/13 odds on one team being held off the scoreboard compared to 6/5 odds both teams will get a goal.

Salah leads the line for first-goal scorers at 11/4, heading a list of nine Liverpool players before finding the first Brighton option in Glenn Murray at 10/1. Firmino and Mane are both 9/2 picks to make a 0-1 scoreline, trailing Reds reserve strikers Daniel Sturridge (3/1) and Divock Origi (4/1). Shaqiri lurks as an 11/2 option to open the scoring.

For 90-minute goal-scorers, Salah (8/11) and Sturridge (5/6) are both better than even money to bag a goal, with Firmino offering 13/10 odds along with Mane. Shaqiri is a 13/8 pick, and even Liverpool midfielder Adam Lallana at 3/1 rates above Murray (10/3) in terms of scoring during the match.

This match would have been far more intriguing had first-choice Brighton keeper Mat Ryan not left for the Asian Cup to represent the Socceroos. The Seagulls have proven a tough out at home against the Big Six, knocking off Manchester United and drawing Arsenal. They also have a victory over Everton at home and will certainly be no pushovers as they sit back, try to absorb pressure, and hit on the counter.

But this match is about Liverpool. They have answered a challenge before in needing a result to advance in the Champions League, but they also had the luxury of playing that crunch match at home. This is a third consecutive match on the road for the Reds, essentially trying out a defensive midfielder in the centre back position in Fabinho, and Van Dijk may not be 100 percent due to illness.

The good news for Liverpool is Firmino is in form, and Salah has been in form for an extended period of time. This is one of those matches where a moment of magic on set-ball pieces from Shaqiri is what Klopp’s side need to make a difference in this contest. Brighton rarely beat themselves, though Trent Alexander-Arnold could alsomake a huge impact on the right as he takes on Bernardo’s expected replacement Gaetan Bong.

This one may not be settled till the final half-hour, but this is where the championship mettle of Liverpool delivers a needed result.