With a Clough, there’s a chance. Or so Burton Albion believe.

The fairy-tale saga of the League One side continues Wednesday in the first leg of their Carabao Cup semifinal against reigning Premier League champions Manchester City at the Etihad. 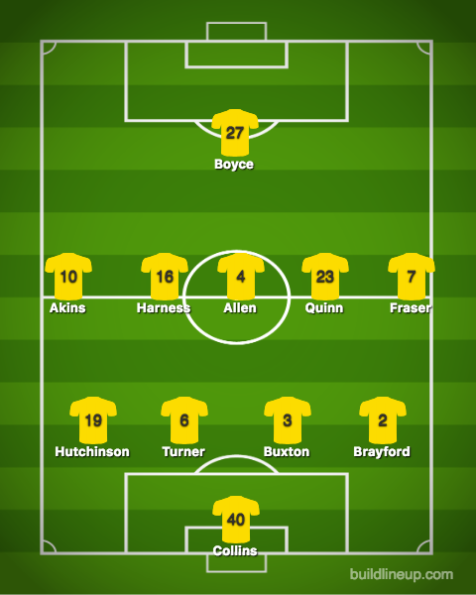 The Brewers are 52 spots below City in the English football pyramid, but that has not stopped Staffordshire supporters from dreaming a little dream. After all, Nigel Clough’s side have won five matches — punching above their weight class at times — to get this far. And perhaps the third League Cup semifinal is the charm for the younger Clough after making the final four with both Derby and Sheffield United.

“We’re looking forward to enjoying the experience [at Manchester City],” Clough told the BBC as media descended upon Pirelli Stadium during the week to pick up the narrative of Burton Albion. “No-one gives us a chance but there are supporters who have been following us for 50-60 years who would never have dreamed we’d be in a League Cup semi-final.

“Let’s hope everybody goes along to enjoy it. Every game you have a chance, it’s what degree that is. Ours is extremely slim.”

Clough is no stranger to the League Cup, having won it as a player at Nottingham Forest when his father Brian managed the club in both 1989 and 1990. The elder Clough won it two other times for Forest during their glory days of the late 1970s when they also won the European Cup twice.

His current side have overturned deficits twice en route to the Final Four, including a 2-1 victory over Premier League side Burnley in the third round. In the last two victories, Southampton loanee Jake Hesketh has bagged the winner, seeing Burton through to this round after his goal separated the Brewers from Championship side Middlesbrough at Riverside.

Manchester City appear to have caught a second wind with three wins on the bounce following back-to-back losses to Crystal Palace and Leicester City. The Citizens made sure there would be a title race for the short-term future last Thursday, defeating current table-toppers Liverpool 2-1 to deal the Reds their first league loss.

Pep Guardiola’s side showed no signs of a letdown in their FA Cup introduction, slicing through Rotherham United 7-0 at home Sunday. The Spaniard overturned nine players from the XI against Liverpool — still sporting a staggering amount of talent — and they were properly ruthless.

Ilkay Gundogan racked up four assists, and Kevin De Bruyne took a major step forwards to being 100 percent healthy after two stints on the shelf with knee injuries, tallying an assist in his 67 minutes of action. Raheem Sterling, Gabriel Jesus, Riyad Mahrez and Leroy Sane all found the back of the net as the only one of City’s five primary attackers — Sergio Aguero — is expected to get his chance to hunt goals in this contest.

With Liverpool out of this cup and also out of the FA Cup after a shock third-round exit to Wolverhampton, attention was turned to City’s title chase and their chances to make up a four-point deficit in the final 17 matches as they also pursue four trophies.

“If everyone is fit we can cope with it,” Guardiola told The Times on Tuesday. “I like to be in four competitions as far as possible. I take the cups seriously. With the quality and amount of players we have you can do it because the team is always stable.”

For all the attacking firepower assembled, there is still a touch of irony that defensive midfielder Fernandinho may be the glue that holds all of City’s hopes together. The veteran watched the win over Rotherham from the bench and should be available for this contest.

Also available is left back Fabian Delph, who completed his three-match ban for a direct red card given late in City’s Boxing Day loss to Leicester City. The Citizens are still without their first choice at that position — injured Benjamin Mendy — and Delph’s absence caused a massive shuffle in the back four that saw Guardiola use Aymeric Laporte at left back and Danilo on the right as the pair rated higher than Kyle Walker.

HOW MANCHESTER CITY GOT HERE:

HOW BURTON ALBION GOT HERE:

Per Bet365, Burton Albion are 50/1 longshots to pull off a shock scoreline and return to Burton upon Trent with a lead after the first leg. The reigning Premier League champions are 1/25 favourites to move 90 minutes closer to the final with a lead, and there are 20/1 odds of the match at the Etihad finishing level.

On the bright side for Burton Albion, they come into this match on the heels of their biggest victory, a 4-0 hiding of Rochdale on the road and are 2-2-0 in their last four matches overall. Marcus Harness had a hat trick Saturday and set up Boyce’s goal. The Brewers are also riding back-to-back clean sheets for just the second time all term, having gotten a point at Bristol Rovers with a scoreless draw.

And now, we present this reality check. Everyone loves the underdog, no one roots for Goliath and so on and so forth. But after watching City go through their gears and leave the smoking shell of Rotherham in their wake, is there any reason to believe something similar will not happen here?

There are always keys of course. Can Burton survive the first quarter-hour unscathed? They have gotten through their last 17 matches without giving up a goal in the first 15 minutes dating back to a 3-2 win at Plymouth Argyle in October.

The Brewers also have been given just two red cards this season, with the most recent one coming in late August. There are certain things underdogs must do to have any chance in this match, including not give up a goal in the five minutes on either side of halftime and in stoppage time. It would be nice not to concede a penalty, but that may be too big an ask given City’s firepower coupled with Burton shipping 43 goals in 35 matches.

But the real problem for Burton Albion is City will be taking this match seriously. The switch finally flicked “on” for Guardiola’s side with that pulsating win over Liverpool, and there is still a current of electricity running through them. De Bruyne is getting closer and closer to 100 percent, Vincent Kompany is quietly giving them solid outings every time he’s called upon, and after Sunday, everyone is scoring goals.

As Gary Oldham famously screamed in The Professional, “EVERYONE!”

It will be Aguero’s turn Wednesday. It may be just one, it could very well be two, but the hope is Burton play for themselves and punch above their weight one more time.