Neither Mauricio Pochettino nor Maurizio Sarri have a trophy to their credit despite impressive coaching credentials. Both look to take a huge step toward that first piece of silverware Tuesday when Tottenham Hotspur host Chelsea in the first leg of their Carabao Cup semifinal at Wembley Stadium. 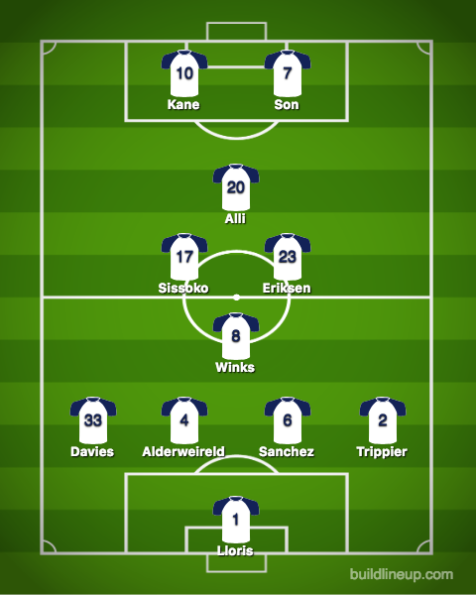 Pochettino’s Spurs, who are also one spot ahead of the Pensioners in the table in third place, bested three Premier League opponents to reach the final four for the first time since finishing runners-up in 2015. The League Cup was the last trophy the Lilywhites claimed, doing so in 2008 by defeating Chelsea 2-1 after extra time on a goal by Jonathan Woodgate in the 94th minute.

It was the first League Cup final played at new Wembley Stadium, which the Spurs continue to use as home grounds while the finishing touches are part on the renovated but overdue to open White Hart Lane, and Spurs would like nothing more than history to repeat itself with a first-leg win in this London derby.

As has been the case since the sacking of Jose Mourinho at Manchester United, the pre-match press conference again turned into reading tea leaves about Pochettino’s future, whether it is with Spurs, potentially at United or even possibly Real Madrid. The Argentine offered no clues about a potential direction, though a few eyebrows were raised with some of his comments.

“Daniel Levy [the Tottenham chairman] is creating a legacy that is going to be amazing for the club,” he said according to The Times, vacillating between wariness of staying too long at a club as Arsene Wenger did at Arsenal while also sounding hopeful he could be with Tottenham for a long run.. “I can see in the future Tottenham winning trophies.

“I don’t know if that will be with us, without us; in one year, in five years. But all the foundations are down for one day to start to win titles and be like other successful clubs.”

Tottenham have won back-to-back matches since their surprising 3-1 home loss to Wolverhampton on Dec. 29, with a 3-0 league victory at Cardiff City and a 7-0 hammering of League Two side Tranmere Rovers in the third round of the FA Cup on Tuesday. Pochettino was able to overturn eight of his starting XI from the win at Cardiff, with Heung-Min Son continuing to terrorise opponents with a goal and two assists.

The South Korea international, who will join his compatriots after Sunday’s game against Manchester United to participate in the Asian Cup, has seven goals and four assists in his last six matches across all competitions.

Chelsea have not lacked for trophies since losing that 2008 League Cup final, having won three Premier League titles, four FA Cups, one League Cup, and of course, the 2012 Champions League title. Sarri, a coaching vagabond who only rose to international prominence in his last two stops in Italy at Serie A with Empoli and Napoli, has never won a trophy in a coaching career that spans more than 30 years.

But what was on the Italian’s mind was the chastening 3-1 defeat to Spurs at Wembley on Nov. 24 in which Pochettino turned the match on its ear by using a diamond midfield that allowed his two attackers up front to isolate playmaker Jorginho in space and take advantage of his lack of pace.

Dele Alli and Harry Kane scored in the first 16 minutes of the game before Son tore around Jorginho for a third on 54 minutes as Sarri took his first loss after coming to Stamford Bridge in the summer.

“I saw my players in the dressing room after the match. They were destroyed,” Sarri told the club’s official website. “They needed only to realise why the match was so bad. It was very easy. The video of the first 15 minutes was clear. There was a big difference in mentality, aggressiveness, determination. It was clear for me and also the players.

“That match was really strange. It was after the international break, and probably we were not able to arrive to the match with the right mentality and focus. It can happen. Now we need to play another match.”

Chelsea have traversed the path to the semifinals by the slimmest of margins, winning each of the three matches by one goal. It took a moment of late magic by Eden Hazard to get by Liverpool at Anfield before defeating former Chelsea midfielder-turned-manager Frankie Lampard and Championship side Derby County in a peculiar match that featured Derby scoring two own goals in addition to two against Chelsea before Cesc Fabregas scored the winner.

In their most recent Carabao Cup match, it took another late goal from Hazard as the Blues saw off Bournemouth at home last month. Chelsea are unbeaten in their last four matches in all competitions (3-1-0) after getting a brace from Alvaro Morata — the Spain international’s first goals since Nov. 29 — on either side of halftime in a 2-0 FA Cup triumph over Nottingham Forest on Saturday.

The win came at a price, though, as Ruben Loftus-Cheek was forced off in the first half with an injury. Sarri is sweating out late fitness tests for both winger Willian and centre-forward Olivier Giroud though teenage starlet Callum Hudson-Odoi, who set up both of Morata’s goals, is expected to retain his starting spot for this match.

“I know for me he is a very important player, he‘s young and now he’s improving, especially in the defensive phase,” Sarri noted of Hudson-Odoi, who has been linked with a move to Bayern Munich. “I think he played really well in the last match. He was in trouble in the game at Watford but only because he had a problem in his hamstring. I’m really very happy with him, I don’t know the situation with the club but for me he’s an important player.”

Sarri, like Pochettino, was able to overturn eight players from the last league match, with Morata, David Luiz and Ross Barkley the holdovers.

HOW TOTTENHAM HOTSPUR GOT HERE:

HOW CHELSEA GOT HERE:

Per Bet365, Tottenham are 5/4 favourites to hold serve with a victory at Wembley, while Chelsea are 9/4 underdogs to carry a victory back with them for the second leg at Stamford Bridge. The odds of the sides playing to a draw are 13/5.

Oddsmakers are giving the lean for over the 2.5-goal threshold at 4/5 odds compared to even money for the under pick. Both teams are expected to score for the second time in as many meetings, with 4/6 odds on that occurring compared to 11/10 for at least one clean sheet in either direction.

As expected, Kane leads the way for first goal-scorer options at 3/1, with understudy Fernando Llorente second at 9/2, pipping out Hazard (5/1). With the possibility of Giroud potentially shaking off an ankle injury and being available, the France international has 6/1 odds while Spurs’ Lucas Moura is 13/2 and Morata is 7/1 along with the very in-form Son.

Sarri hammered home the point to anyone who would listen about how bad Chelsea were in the first 15 minutes of their loss to Tottenham Hotspur and the need to play better. The good news is Chelsea could not conceivably play any worse as the 2-1-2 part of the 4-1-2-1-2 formation Pochettino unveiled created huge pockets of space Alli, Kane, Son, and Christian Eriksen tore through.

The loss also showed just how much of a perfectionist Sarri is because he leveled a stunning double-barreled criticism of N’Golo Kante after the match, which was all the more surprising considering Kante’s positioning in Sarri’s 4-3-3 is not his ideal place on the pitch given his prowess as a disruptive force in the midfield. The France international has since played better and to Sarri’s liking, but it did also reveal the Italian knew what he was talking about when he said he was in the early stages of rebuilding the 2017 Premier League title winners.

Both sides are expected to use fairly strong lineups for this first leg after being able to rest most of their regulars. Sarri probably wasn’t thrilled he had to use Hazard as an injury replacement before halftime, but that is the way things have been going for the Pensioners of late with regards to injury.

The last piece of curiosity with Chelsea comes with Cesc Fabregas, who was thought to have made his farewell this weekend in the win over Nottingham Forest. The Spaniard has a deal in place to move to Monaco, but Sarri wants a replacement to fill the role of Jorginho’s understudy — Fabregas’ role this season — before letting him move to the Ligue 1 side.

He is not expected to be among the substitutes for this match despite being at Cobham this week for training.

As for this match, it will likely be a cagey one, though the expectation will be for Chelsea to be wary of pouring forward too many bodies out of fear of being exposed like they were in the first meeting. Son could be the X-factor in this match given his scintillating form, with Spurs being able to find offence easier than Chelsea in this match.