Another motivating ploy or just a genuine fear of a malaise? A testy Jose Mourinho looks to get Manchester United nearer to qualification of the Champions League knockout rounds Tuesday when they host Swiss side Young Boys in a Group H match. 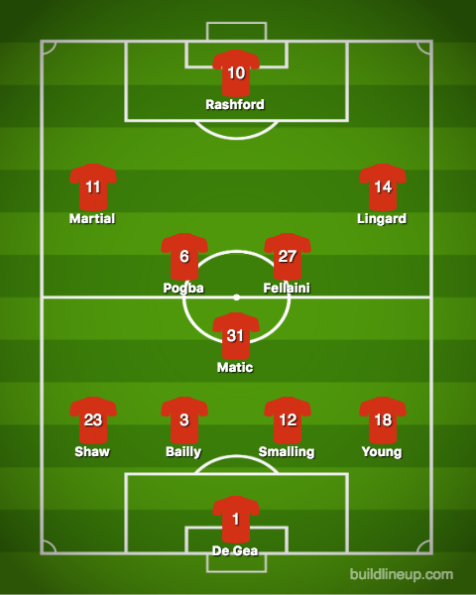 Any hopes Manchester United harbour of making a run at their eternal rivals Manchester City are rapidly fading as the Red Devils are now 14 points adrift of their noisy neighbours and in seventh place in the Premier League following a scoreless draw at home versus Crystal Palace on Saturday.

The thought United had turned a corner after their smash-and-grab raid at Juventus in their previous Champions League match proved to be a false dawn as they followed that victory up with a 3-1 derby loss to City and this tepid draw coming out of the international break. Adding two more points to the already yawning chasm in chasing an imperious City side clearly rankled Mourinho, who told The Times afterward:

Romelu Lukaku’s goalless drought reached 11 matches in all competitions dating back to his goal versus Watford on Sept. 15, and United went a second consecutive league match without a goal in the run of play. Midfielder Paul Pogba, who sat out the derby due to injury, also returned to the fray and his ineffectiveness incurred the wrath of Mourinho, who tweaked the France international post-match for chartering a plane to Paris with teammate Anthony Martial and fellow compatriot City left back Benjamin Mendy to attend a friend’s party.

Despite their uneven play domestically, Manchester United (2-1-1) can clinch a spot in the last 16 of the Champions League with a match to spare if they win this match and Valencia fail to win at Juventus in the other Group H contest Tuesday.

Mourinho will make at least two changes to his back line from Saturday’s draw. Left back Luke Shaw returns having served a one-match ban for yellow card accumulation, but centre back Victor Lindelof is sidelined with a hamstring injury, which makes Eric Bailly the likely replacement to pair with Chris Smalling.

Bailly has not played for United in any competition since Oct. 6, getting a quick hook from Mourinho 19 minutes into their match versus Newcastle United in which the Red Devils conceded twice in the opening 10 minutes before rallying for a 3-2 win.

It also seems unlikely Lukaku will get another crack to lead the line as Mourinho was hoping the Belgium international would end his slump versus Palace. Marcus Rashford appears most likely to replace him, with either Jesse Lingard or Juan Mata on the right after both played for an hour Saturday.

“It’s really hard to point a finger to what’s going on,” Shaw said at Monday’s news conference. “Of course, it’s frustrating to watch, especially with me [being suspended] on the weekend, but we all know that we are much better than that. We train really hard during the week.

Young Boys are all but mathematically eliminated from advancing out of Group H, and the Swiss side have been better than only Lokomotiv Moscow and AEK Athens in this competition. Gerardo Seoane’s side have won their two league matches on either side of the international break since a 3-1 loss at home to Valencia in their least Champions League match and are coming off a 1-0 victory over Lugano on Saturday.

Miralem Sujelmani scored seven minutes from time as Young Boys moved a staggering 15 points clear of FC Basel in the Swiss Super League through just 15 matches. Seoane will be without midfielder Sekou Sanogo, who was given a straight red card in the 77th minute of Young Boys’ loss to Valencia for a two-footed challenge on Frances Coquelin.

Forward Guillaume Hoarau, who has three of the club’s five goals in Champions League play — including their two qualifying matches — will also miss out through injury.

“We have learned some lessons in this Champions League campaign. The team has learned its lessons from past games. This will be a very different game to the reverse fixture in Bern.”

United will wrap up their group play at Valencia in what could be a winner-take-all encounter, while Young Boys will host Juventus.

Per Ladbrokes, United are 2/7 favourites to claim all three points and give themselves a chance for advancing to the knockout round. There are 9/2 odds Young Boys can claim a historic point from Old Trafford, and 11/1 odds the Swiss side can pull off the shock win.

Despite United’s woes, oddsmakers expect goals in this game as the Red Devils have 4/5 odds to win while getting more than 2.5 goals. A United win by a 1-0 or 2-0 scoreline has 27/10 odds, and a draw with less than 2.5 goals — something United did earlier in group play at home versus Valencia — has 6/1 odds. A high-scoring draw or a Young Boys win with more than 2.5 goals offer identical 18/1 odds, while a low-scoring win for the Swiss outfit is the longshot at 22/1.

Oddsmakers also feel Lukaku is due to end his scoring woes as he is the top choice to open the scoring at 10/3 odds. Martial, who capped the scoring in the reverse fixture — a 3-0 United win — is second with 7/2 odds, while Rashford and Alexis Sanchez are joint-third at 4/1. Pogba, who had a brace in the first match with a goal in play and from the spot, has 9/2 odds to again score first versus Young Boys, while Lingard and Mata are both 6/1 options.

Young Boys strikers Jean-Pierre Nsame and Roger Assale are the top options for the visitors at 10/1 and 11/1, respectively.

If ever there was a time for United to put together a solid 90-minute effort, it is here and now. On paper, the schedule breaks kindly for Mourinho’s team this week — they are prohibitive favourites for this match and will be again at St Mary’s against a beleaguered Southampton side who could sack Mark Hughes by the final whistle of that contest should United win.

There are two players who will be under the microscope for this match — Lukaku and Bailly. Lukaku’s lack of goals will be a talking point until he does put one in the back of the net, but for Bailly, this is a chance to get in Mourinho’s good graces since Lindelof’s hamstring injury likely will sideline him the rest of the calendar year. The only other central defender Mourinho can turn to besides Bailly is Phil Jones, whose last match action came in their Carabao Cup loss to Derby County in late September.

There will be a fair amount of scoreboard watching because if United take care of business, and Juve does them a solid and beat Valencia, that final Champions League match becomes a much-needed dead rubber in which Mourinho can blood the youngsters and reserves to begin rotating personnel ahead of the hectic holiday fixture list. This game will likely lack the wanted aesthetics of United picking their number, but right now, any win will do.