Manchester United are clearly a wounded side, yet no one truly knows if they are still a dangerous team.

Coming off a disappointing midweek Champions League defeat, United attempt to shake off their malaise Sunday at Old Trafford against a rejuvenated Everton side who appear to have finally found their stride. 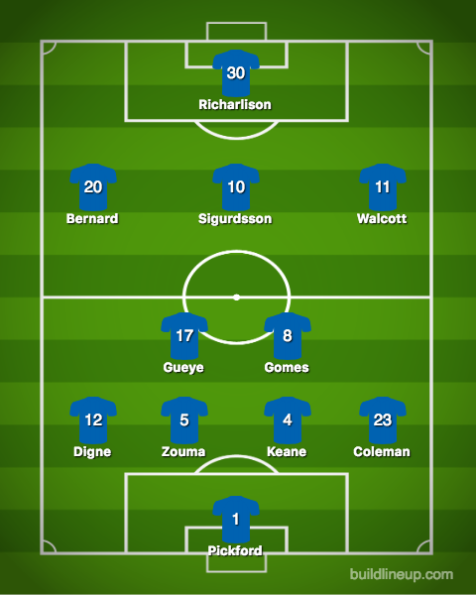 Jose Mourinho’s team were languid in the opening 45 minutes for a third successive match, but unlike their thrilling escape acts that resulted in a victory over Newcastle United and a draw at Chelsea around the international break, storied Italian side Juventus would show little mercy as they comprehensively outplayed Manchester United in a 1-0 victory Tuesday night that gave the Old Lady a vise-like grip on first in the group.

While all the attention was drawn around Cristiano Ronaldo in just his second match at Old Trafford since leaving for Real Madrid in 2008, Paulo Dybala plunged the dagger into United in the 17th minute, knocking Ronaldo’s cross into the net after being left unmarked first by Nemanja Matic during his run and then by Victor Lindelof in the penalty area.

United goalkeeper David De Gea then made a string of quality saves throughout the rest of the first half simply to keep his side from being run off their own pitch. United (4-2-3) again raised their play in the second half, but aside from a shot by Paul Pogba that thumped the left post and then Juve keeper Wojceich Szczesny’s head before skipping away from danger, the hosts offered little and the bench offered nothing as Mourinho did not make a substitution.

That was partly due to a spate of injuries that left Marouane Fellaini, Alexis Sanchez and Jesse Lingard all unavailable. The only true attacking option at Mourinho’s disposal was 18-year-old Tahith Chong, who was on the senior squad for the first time in any competition, and “The Special One” thought the better of bringing the starlet on in such a pressure-cooked situation.

“Given the dynamic of the game, I didn’t feel it was appropriate to bring him on,” Mourinho explained to United’s official website. “You can’t expect a kid making his debut in a game like this to give you something like scoring a goal. So that’s why I didn’t make any changes on the pitch.

“I really missed Fellaini because when we are dominant, we are playing in the opponents’ half and the opponent closes the way they did, and they brought (Andrea) Barzagli as a third centre-back, Fellaini is a player that gives us different things. We missed him, but the boys gave everything and when the boys give everything and go until the last second I am always happy with them.”

While Mourinho has yet to say whether any of the injured trio will be available for this contest to support Anthony Martial and Marcus Rashford, the lack of form from centre-forward Romelu Lukaku is concerning.

The Belgium international has gone eight matches without a goal in all competitions since netting against Watford, and it appears the cumulative fatigue of reaching the World Cup semifinals plus joining United without a rest – Lukaku has appeared in every match, including their Carabao Cup defeat on penalties – is taking its toll on the 25-year-old as United enter this match in 10th place and nine points adrift of eternal rivals Manchester City and Liverpool.

The criticism of Lukaku’s barren spell has become intense enough that Mourinho defended his striker in the post-match news conference, saying, “The player is a fantastic professional that wants to give everything, but I have to agree his moment is not sweet.”

Lukaku, who played at Everton from 2013-14 to 2016-17 before joining Manchester United last season, scored 87 goals in 166 matches across all competitions for the Toffees.

Everton (4-3-2) may have only just recently figured out how to replace Lukaku, with Marco Silva drafting Richarlison to lead the line after starting the season with the Brasil international on the left wing. The tweak in his 4-2-3-1 set-up has allowed Silva to field his four best attacking players in Bernard, Gylfi Sigurdsson and Theo Walcott behind Richarlison, while Andre Gomes has been slotted into a holding midfielder’s role.

Sigurdsson has been the biggest beneficiary with three goals in his last three games, while each of the four most forward players has scored at least once in that span.

That formation has helped Everton win their last two games, and they have won three on the trot overall in league play. Silva’s personnel management proved vital in last weekend’s 2-0 victory over Crystal Palace as substitutes Dominic Calvert-Lewin and Cenk Tosun scored in the 87th and 89th minutes, respectively.

“It is getting better now, it was difficult to get in goalscoring positions in the first few games and I was the guy who made more assists for the players, left and right,” Tosun told evertontv after scoring for the second time in three games.

“But in the past few games I had a lot of shots and got in a lot of scoring positions and those things made me happy.

Everton, though, would not have been in a position to win had keeper Jordan Pickford not stopped Luka Milivojevic’s penalty on the hour after Seamus Coleman brought down Wilfried Zaha. The England No. 1 got his trailing leg to deflect Milivojevic’s effort down the middle to preserve the scoreless deadlock.

“Jordan’s quality and profile are solid, he could keep calm in that moment (the penalty) to make the right decision and it was an important moment in the match,” Silva said.

While Colombia international Yerry Mina made the 18-man roster for the first time this season after being slowed by a foot injury following the World Cup, it appears unlikely he will feature in this match given the solid partnership in central defence between ex-United player Micheal Keane and Kurt Zouma.

United did the double against Everton last term, smashing six by Pickford without reply. Lukaku had a goal and an assist in a 4-0 romp against his former team at Old Trafford, and United are unbeaten in their last seven (5-2-0) in all competitions versus the Toffees.

Per Ladbrokes, United are still prohibitive favourites despite winning one match in their last seven at 8/11 odds, while Everton are 15/4 underdogs to claim just their third at Old Trafford in the Premier League era. The odds of the teams sharing the points are 27/10.

Despite his dry spell, oddsmakers still like Lukaku to score the first goal of the match against his former team enough to have him lead the way with 4/1 odds. His wingers Martial and Rashford are joint-second at 11/2, while Sanchez lurks at 6/1. Pogba is at 7/1 and always worth holding in the back of your mind as United’s designated penalty taker, especially since Everton conceded one last weekend. Tosun, Calvert-Lewin and Richarlison are all 17/2 to give the Toffees a 0-1 lead.

If form were the prevailing guide, it would be very difficult to pick against Everton. If it were history, then United would undoubtedly be the choice. Where, then, is the balance between the two for this match? That is the question to be answered Sunday at Old Trafford.

If United were playing a lesser opponent and Mourinho had more attacking bodies available, this would have been an opportunity to hold Lukaku out of the starting XI, let him catch his breath mentally, and then be used if the match situation warranted. But with Sanchez still sidelined, and Lingard likely not ready to play a full 90 minutes, the Belgium international must lead the line once more and maybe find the break he so desperately needs to get back on track.

Lukaku, though, is one symptom of an overall bigger problem. For much of this season, United’s attack has the look of Mourinho putting square pegs into round holes. Veteran leadership of Ashley Young and Antonio Valencia aside, right back has been a black hole.

Mourinho’s stubbornness to make Pogba play the spot he thrived in with France — in a deeper midfield position — may also be holding this offence back. But it also may be out of necessity since Matic endured a torrid time versus Juventus and may lack the pace where teaming him with Juan Mata as holding midfielders and pushing Pogba into the No. 10 role could spark the offense.

Or it could be something as simple as swapping spots for Rashford and Lukaku, and letting the youngster lead the line. The individual quality of United’s players is not lacking, it is whether Mourinho has the willingness to experiment on the fly. His side have this match and a tricky tie at Bournemouth before the Manchester derby at the Etihad on Nov. 12, and United are already in danger of having too much ground to make up to potentially be in a title race.

This match at this moment, however, is a good referendum for Everton. They have looked the part of a European-quality team the last two matches since Silva’s personnel swaps, but there is still a gulf in quality for the Toffees to cross in beating the likes of Leicester City and Crystal Palace, and beating Manchester United.

It’s not that Everton were ill-prepared in their first match against a “Big Six” club last month — the 2-0 scoreline at Arsenal was a combination of Petr Cech stonewalling the Toffees and a three-minute lapse defensively in which the Toffees switched off — but given United’s form with one win in their last seven matches, this has to be a match where Silva’s men have to stare down history and believe they can indeed get not only a result at Old Trafford, but the rare victory that could ignite a charge to the top six while kicking United down a peg or two.

Everton’s wingers — Bernardo and Theo Walcott — could be the swing votes in this match, and if Sigurdsson is given space with the ball, he has too much quality to not find creases in United’s back four. Manchester United need to come out swinging in this match, and they may need the ghosts of Old Trafford a little bit as well.