The pressure continues to mount for Jose Mourinho, who could face the chopping block if Manchester United fail to at least get one point at Old Trafford on Saturday against a winless Newcastle United side. 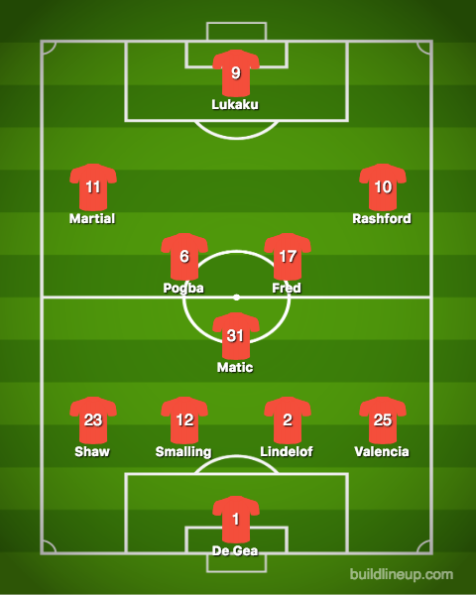 Manchester United (3-1-3) are languishing in 10th place in the table, enduring a miserable stretch in the past fortnight that could see them go into the international break winless in five matches across all competitions. Mourinho’s side barely improved on their lethargic loss last weekend at West Ham United as Spanish side Valencia held them to a scoreless draw Wednesday at Old Trafford in Champions League play.

“The last few games haven’t been good enough. We need that break and we need that break with a win,” left back Luke Shaw told MUTV. “It’s always a better feeling going into an international break with a win, because if you go in without a win, it’s a long time before our next game when you can put things right. It’s frustrating if we don’t, but I’m sure we’ll bounce back.

“We keep saying that after every game and I’m sure it’s hard for the fans to take, but you don’t know what else you can say. We need to win on Saturday and we have to win and we have to do it for ourselves, for the team, for the staff and most importantly for the fans.”

Supporters at “The Theatre of Dreams” were treated to a nightmare of insipid football Wednesday, a far cry from the “Attack, attack, attack” pleas the Stretford End voiced throughout 90 forgettable minutes. That such an effort came against a side currently 14th in La Liga with just five goals in nine matches made it all the worse.

Alexis Sanchez’s struggles continued on the right wing, his lack of effectiveness exacerbated by Valencia’s repeated forays forward in the open space he created failing to back track in front of Antonio Valencia. Mourinho made only one substitution, swapping Anthony Martial for the Chile international in the final quarter-hour, but it mattered little in the end as United had only four shots on target in a fourth consecutive match without a victory.

“They tried, the players tried and they raised the level of their effort. We raised our level and intensity and we tried to play in some crucial positions building up but we don’t have the technical quality to build from the back,” said Mourinho, again offering his team faint praise amid his withering criticisms. “We knew we were not going to create 20 chances because we know our attacking players are not also in the best moment of confidence and individual performance level.

“So we thought with three or four chances, we would score and win the game. Which we didn’t but, as I was saying, it’s not a bad result.”

Mourinho remains determined to stay at Old Trafford in a bid to buck the third-season struggles that have engulfed him – he still has the backing of ownership and club chairman Ed Woodward – and other high-profile clubs throughout his storied career, but even that right now appears little more than a marriage of inconvenience between. A growing list of former United players turned pundits – most notably Rio Ferdiand and Paul Scholes – have called on Woodward to sack Mourinho, with Ryan Giggs holding out in favour of Mourinho.

As all of English and European football media continue to take sides on whether Mourinho’s bile and rage will eventually consume himself and cost him this job through either the sack or resignation, the other looming truth is the only realistic option United have in trying to salvage this season if Mourinho does exit is bringing Zinedine Zidane to Old Trafford, and there is no guarantee the former Real Madrid boss and three-time Champions League winner will come on board.

Newcastle United manager Rafa Benitez can empathise with Mourinho regarding struggling player performance, but only so much as the Tyneside club are one of three Premier League teams without a victory. The Magpies (0-2-5) are at the top of the drop, ahead of fellow winless squads Huddersfield Town and Cardiff City on goal difference, with Benitez’s tactical nous limiting the damage of a daunting early stretch of schedule that included four of the big six sides.

Like Mourinho, Benitez has plenty of worry about his team’s attack after it was completely non-existent in a 2-0 loss at home to Leicester City last weekend. Newcastle had only one shot on target, and it embodied the word “speculative” as Jonjo Shelvey tried to catch Foxes keeper Kasper Schmeichel off his line with a 60-yard effort that the Denmark international comfortably caught under his crossbar.

Otherwise, there was little to write home about, with the St James’ Park faithful again engaging in lusty booing of beleaguered owner Mike Ashley as the lack of funds to strengthen the Magpies continues to be the undercurrent regarding all things Tyneside and straining the relationship between owner and manager. Newcastle conceded a penalty on the half-hour when DeAndre Yedlin handled Harry Maguire’s shot inside the 18, and slack defending on a corner in the 73rd led to Leicester’s central defender putting the match out of reach with a header.

“The reality is, if the team are doing well, normally the fans are happier,” Benítez told The Times. “When you are not doing well, football fans expect to see the team doing things right. We have to improve, that is it.”

The problem for Benitez is he lacks the options in personnel to drive that improvement, especially in attack. Both Joselu and Salomon Rondon lack top-shelf quality operating as the lone striker in Newcastle’s 4-4-1-1 formation, and Ayoze Perez – who plays beneath whichever striker Benitez chooses for a given match – does not get enough touches to help them.

The Magpies have yet to lead at any point in their eight matches across all competitions this season. They have totaled just five goals, failed to score more than one in any contest, and three of those markers have come at 83 minutes and later.

The home team won both matches last term, with Manchester United storming to a 4-1 victory as Pogba had a goal and an assist to help the hosts overturn an early deficit. Newcastle won 1-0 in the most recent meeting, after which Mourinho excoriated his players for lacking the needed desire to win.

Newcastle’s lone win in 24 trips (1-8-15) to Old Trafford in the Premier League era was a 1-0 triumph in 2013 on a goal by Yohan Cabaye. The Magpies have scored more than one goal just twice in those 24 matches at Manchester United.

Per Ladbrokes, Man United are still prohibitive favourites to tune out the noise for one match at least as they enter this contest with 4/9 odds to claim all three points. The odds of the teams splitting the points are 16/5, while Newcastle are 7/1 longshots to claim only their second win at Old Trafford in the Premier League era.

While oddsmakers are expecting Manchester United to score goals — a win with 2.5 goals leads the listings at 27/20, there is a healthy respect for Benitez’s tactics as a Manchester win under 2.5 goals is not that far off at 9/4. Unsurprisingly, a 0-0 or 1-1 draw is the third-most attractive option at 4/1, while Newcastle victories offer substantial returns under 2.5 goals (12/1) and over (14/1).

Lukaku heads the list for first goal scorers at 14/5, leading a parade of seven Man United players that include Rashford (7/2), Martial (9/2), Sanchez and Pogba (5/1), Jesse Lingard (6/1) and Juan Mata (7/1). Joselu and Rondon are both 11/1 to give the Magpies a shock lead, rating behind Fellaini and no goal-scorer.

Lukaku is even money to score over the course of 90 minutes, with Rashford 11/8 and Martial (8/5) edging out Pogba (7/4) for third. That is somewhat surprising given Pogba is Man United’s designated penalty taker and Newcastle have already conceded spot kicks to two of the other four “Big Six” sides they have faced. Oddsmakers are still showing faith in Sanchez to get on track, offering 15/8 odds to find the back of the net.

How much longer can this go on? This already has the feel of a Mexican standoff, with Mourinho offering clipped responses at press conferences, former Man United players-turned-pundits offering opinions every time a microphone is thrust in front of them or held by them and breathless speculation about suitors Woodward has or has not secretly met with to gauge their interests in a job that has been evolving into a poisoned chalice since the departure of Sir Alex Ferguson.

And with a reported £15 million payout for termination, the Glazers will have to think long and hard about sacking Mourinho and bringing in Zidane during a season as opposed to at season’s end. And whether you love or loathe “The Special One,” the United fan base will not go quietly into the night if the hatchet man does come calling for Mourinho.

But you know who can fix this, for one weekend at least? Lukaku. If ever Man United needed the Belgium international to live up to his flat-track bully reputation and pump in a goal or two, it’s in this match at this moment. Lukaku’s last goal came five matches agao at Watford, and it has been a combination on both ends why the drought is where it is. One is the lack of service, and the other is lack of finishing. One or both have to change, and one option is for Mourinho to have Pogba and Mata flank Matic in the 4-3-3 knowing full well Benitez is going to have two banks of four and dare Man United to come forward.

And that brings the conversation to Newcastle. Any other manager would have been pilloried with four league goals through seven matches and an inability to have a lead for even one of a possible 720 minutes. With the distance between last season’s 10th-place finish and this season’s current plight at Tyneside, it does look like Benitez was a sort of miracle worker in getting the Magpies to the top half before regressing to the mean thus far.

Some of that is the schedule, and while Man United are the fifth of the big six Newcastle are facing in their first eight matches, there can be only so much negative football played before it weighs on the players. That is not a knock against Benitez and his side, it’s simply the realisation trying to win 1-0 or hold out at 1-1 or 0-0 is an energy-intensive exercise steeped in frustration and misery. And Newcastle supporters already have that in spades tolerating Ashley’s stewardship of the club.

After playing down to Valencia, this is the match Man United finally get it right for 90 minutes and get three points, however convincing or unconvincing it may be.