No lead may be safe Sunday at the Emirates, where in-form Arsenal look to win a fourth straight match on the bounce against an Everton side who regain the services of pacey attacking winger Richarlison. 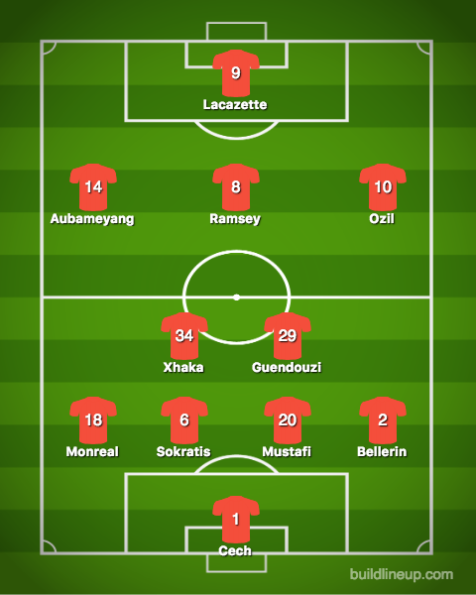 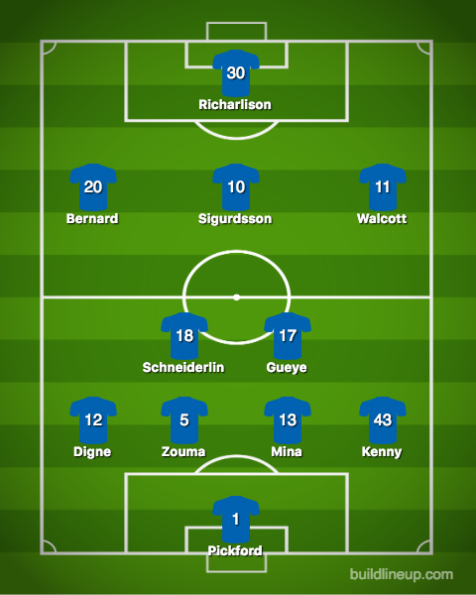 Arsenal (3-0-2) started their second successive Europa League campaign on a positive note, easing past Ukrainian side Vorskla Poltava 4-2 on Thursday. Pierre-Emerick Aubameyang had a brace with goals on either side of halftime, and Henrikh Mkhitaryan assisted on two goals as the Gunners have now racked up 14 goals in their last five matches after starting the season with a 2-0 home loss to reigning champions Manchester City.

“It was an important victory and it was a bit tough in the first half, but thankfully we scored before we went to the dressing room at the end,” Mkhitaryan told Arsenal’s official website after staking his claim for more playing time. “In the second half it was easier because they started to play football, started to have the ball and started to attack, so we had more spaces in behind their defensive lines.

Summer signing and No. 2 keeper Bernd Leno made his Arsenal debut and the £20 million man came within 13 minutes of a clean sheet, but a breakdown by defender Stephan Lichtsteiner led to a goal before Vorskla snatched a second in stoppage time. The Gunners have yet to post a clean sheet, and that detail did not escape Aubameyang.

“I think we played well in the first half and at the beginning of the second as well and we scored four goals, but we need to improve and fight to not concede goals like we did in the last few minutes,” the striker noted.

Arsenal manager Unai Emery turned over eight players from the side that edged Newcastle United 2-1 last weekend, with the lone holdovers Aubameyang and left-side defenders Nacho Monreal and Sokratis. Summer signing and midfielder Lucas Torreira also received his first start as Emery tweaked his formation to a 4-3-3 after using a 4-2-3-1 throughout league play.

Emery lifted the Uruguay international in the 57th minute as a precaution after a knock, but teenager Matteo Guendouzi was in line to be restored to the starting XI for this match regardless of the outcome.

The north London side are expected to also bring back regulars Shkodran Mustafi and Hector Bellerin to the back four on the right, and they could be the ones with the primary responsibility of containing Richarlison.

The Brasil international makes his return for Everton (1-3-1) after serving a three-match ban for violent conduct for a headbutt on Bournemouth’s Adam Smith on Aug. 25. Richarlison — who scored three goals in the Toffees’ first two contests — made good use of his unexpected additional free time, making his debut for the Selecao during the international break and scoring his first two goals for them in a friendly versus El Salvador.

But Toffees manager Marco Silva may move the 21-year-old from the left wing to a centre-forward position for this match. That is because summer signing Bernard was the only attacking player to distinguish himself in their 3-1 home loss to previously winless West Ham United last weekend. Everton conceded twice in the first half-hour, and while Gylfi Sigurdsson pulled one back right before halftime, any hopes of a fightback were thwarted when they conceded a third just after the hour.

Richarlison, though, appears ready to move out of his comfort zone to get his compatriot on the pitch to get Everton going again, though it would make striker Cenk Tosun the odd man out in their 4-2-3-1 formation.

“Bernard is an agile player. He is really fast and scores a lot of goals,” Richarlison told evertonfc.com. “With his speed, he gets behind players and is a danger in the box. His ability pushes opponents back and causes them problems.

“He is highly thought of in Brazil. He is known as ‘Joyful Legs,’ so he is the type of player who will bring joy to the Everton fans. He will be popular here and, hopefully, have a great season and be a big influence on Everton.”

Something that would also bring joy to Everton fans would be a tightening of their side’s defence. The Toffees also have yet to record a clean sheet, which is slightly more surprising than Arsenal’s inability to do so since Everton have England No. 1 keeper Jordan Pickford between the sticks.

But in Pickford’s defence – or lack thereof – Everton already have an entirely different back four from the one that started the season. Lucas Digne has been credible at left back since supplanting Leighton Baines, but talisman Phil Jagielka has been sidelined with a knee injury.

Mason Holgate and Kurt Zouma have paired in central defence the last three matches overall, but there is hope summer signing and Colombia international Yerry Mina could finally be ready for his Toffees debut, possibly at Holgate’s expense. Jonjoe Kenny continues to hold down the right back spot.

While much of the focus is on Richarlison, ex-Arsenal winger Theo Walcott will return to the Emirates for the second time as an opponent. Walcott, who has two goals in Everton’s first five matches, broke in with the London side as a 17-year-old in 2006 and totaled 65 league goals in 170 starts and 270 top-flight matches.

Arsenal did the double in emphatic fashion last term, scoring five goals in each victory. The 5-2 rout at Goodison Park last October marked the end of Ronald Koeman’s tenure at Everton and started the whirlwind courtship of Silva, much to Watford’s protest. The Gunners followed that up with a 5-1 thrashing at the Emirates as Aaron Ramsey bagged a hat trick and Mkhitaryan assisted on three of those markers.

Arsenal have won three on the bounce over Everton overall and carry a 23-match home unbeaten streak (19-4-0) in all competitions. The Toffees have yet to win at the Emirates, losing their last five and going 0-4-9 since its opening in 2006.

Everton’s lone victory at Arsenal in the Premier League era is a 2-1 win Jan. 20, 1996, at Highbury on goals by Graham Stuart and Andrei Kranchelskis.

Per Ladbrokes, Arsenal are solid favourites at 4/9 odds, while Everton are 11/2 underdogs to end their hoodoo at the Emirates. The odds of the teams splitting the points are 18/5.

Oddsmakers are expecting plenty of scoring in this match as the Gunners are 10/11 favourites to win while there being more than 2.5 goals. While they still pick Arsenal to win a low-scoring contest, it is a decent 4/1 return the final score is either 1-0 or 2-0. A draw with a total of under 2.5 goals is 6/1, and a deadlock over that threshold is 10/1. A Toffees victory of 2-1 or better is listed at 10/1, with little faith being put in their defence being able to ride out a 1-0 or 2-0 victory at 16/1.

Aubameyang unsurprisingly leads the line for first goal-scoring options at 16/5, with Alexander Lacazette second at 7/2. Denny Welbeck, who scored in the Europa League win, rounds out the top three options at 4/1, and the Arsenal playmakers — Mkhitaryan, Ramsey and Ozil — are all in step form from 11/2 to 15/2. Tosun is listed as Everton’s best bet to give the visitors a 1-0 lead at 8/1, followed by Oumar Niasse (17/2) and Richarlison (9/1).

Aubamyeang is better than even money to grab a goal during the 90 minutes at 5/6 odds, and Lacazette is level. Richarlison appears to offer a decent 5/2 return on finding the back of the net for the Toffees, and ex-Gunners winger Walcott checks in at 3/1 to put one home against his former mates.

Eleven months ago, Arsenal decimated the blue part of Merseyside, setting in motion the chain of events that bring us to his match. Everton underwent a drastic overhaul, arguably overspending for their shiny new toys, but one in which they went out to change the culture of the club and remove the “sleeping giant” label.

Silva’s side are still a mess defensively, evidenced by the home loss to West Ham last weekend. Throwing Mina into the fray this weekend has an air of desperation, but at the same time, there is a sense the Colombia international’s presence cannot make the situation any more dire in terms of breakdowns in front of Pickford.

In attack, moving Richarlison out of this comfort spot on the left is also a big risk. He obviously has the size and the pace to be a centre forward, and he can most certainly give a questionable Arsenal defence fits, but at what cost does it come for Everton chemistry in the final third?

The Toffees have yet to be held off the scoresheet, and there is no shame in being held to one goal in two of the three matches without your best attacking option. There’s little doubt Bernard will find his way into the starting XI, sooner rather than later, and there’s also the issue of what to do with Dominic Calvert-Lewin, who scored three goals in all competition during Richarlison’s ban.

Arsenal offered no clues to their consistency with Thursay’s win over Vorslka, though it did show that Emery was right in tabbing Cech over Leno for Premier League duties. There is still a sense keeper is the last position where the Gunners have to rip off the band-aid to commit to this rebuild, but their defence is not good enough where Cech’s shot-stopping skills are to be dismissed.

The Torreira-Xhaka debate will continue to rage until Xhaka gets sent off or picks up his fifth yellow card and sits a match, which is something that could happen by the next international break. It is nice to have depth in which Emery can rotate all three midfielders, but Torreira and Guendouzi are the future in front of the back four.

The middle third is going to be a no-man’s land of sorts — whichever side can pin the other’s holding midfielders back likely will emerge as a victor in this game. And right now, that looks to be the Gunners by virtue of having a (slightly) better defence and finishers in a bit better form than the Toffees at the moment.