(Writer’s Note: This preview can be seen in a text-only format at the STATS Hosted Solutions site. I am adding edits, projected starting lineups, odds-related picks and a final score prediction for the match for this website.)

The surprise package of the first four matches, Watford put their 100 percent record on the line Saturday at Vicarage Road as they try to move nine points clear of Manchester United. 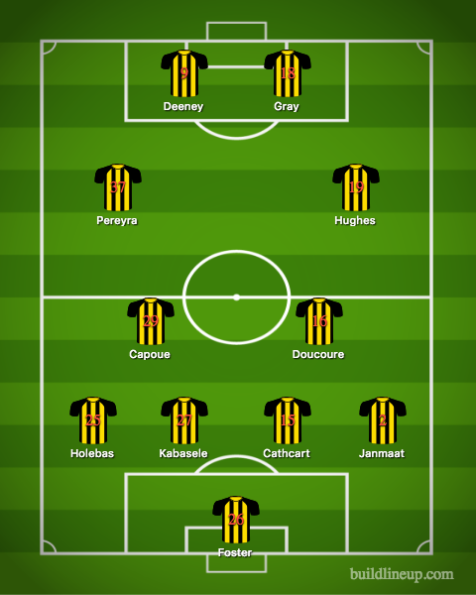 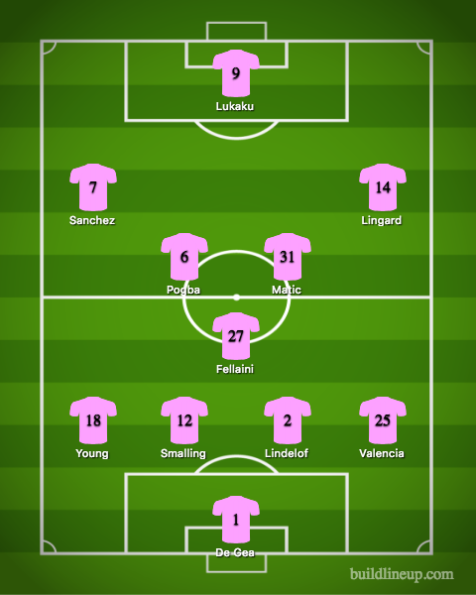 The Hornets (4-0-0) are enjoying the high life at the moment, trailing only evergreens Liverpool and Chelsea in the table with the maximum 12 points. Manager Javi Gracia has gotten his team to buy into his 4-2-2-2 formation, with Roberto Pereyra a revelation on the left wing replacing the departed Richarlison and keeper Ben Foster making the most of his second go-round with Watford.

One of the underrated parts to Watford’s success is their ability to build a deep squad that is able to run a two-track course with league and cup responsibilities. Watford have won all five of their matches overall and overturned their entire XI in their Carabao Cup win at Reading.

Gracia was named Premier League Manager of the Month, and the Spaniard has instilled confidence his team can claim another high-profile pelt after rallying to defeat Tottenham Hotspur 2-1 before the international break on goals by Troy Deeney and Craig Cathcart set up by Jose Holebas seven minutes apart in the second half.

“In this moment the results help us to feel we can do it, but it’s only a feeling because you have to do many things to win,” Gracia told Watford’s official website as they seek a club-record fifth consecutive home win in the top flight. “We need to manage situations, we need to play well, run a lot and fight a lot. After that we can have some options to win. We try to prepare as good as possible.”

Pereyra has a team-high three goals and Holebas leads the way with four assists. The Hornets have scored at least two goals in all five of their victories. Gracia is expected to stick with the same XI he has used in all four of his league matches, with Deeney and Andre Gray leading the line ahead of wingers Pereyra and Will Hughes.

“We are in a good moment, we are enjoying it, we know in the future things may change but this is a good moment for us,” Gracia added. “I prefer not to speak about if it’s the fifth game in a row, the sixth or the fourth – it’s the next one, the new one and the chance to get three points. The past is the past. I prefer to focus on the next game and the next three points.”

Getting three points has been challenging at times for Manchester United (2-0-2), who have been plagued by inconsistency and injuries at various positions across the pitch. They avoided a third consecutive loss before the international break with a comprehensive 2-0 victory at Burnley that relieved some of the crisis mode surrounding Jose Mourinho and the side, but the truth remains United have much heavy lifting to do to get back into the Premier League race.

The next challenge for Mourinho comes at left back, where Luke Shaw is not likely to play after suffering a concussion playing for England in their Nations League opener versus Spain. Shaw, who had been a whipping boy for Mourinho since his arrival from Southampton, had gotten into the manager’s good graces with a roaring start in being named the club’s player of the month.

United do have options if Shaw is not cleared to play, with one possibility being teenager and summer signing Diogo Dalot making his league debut. Dalot, a £19 million transfer from Porto, had his first action of the season with United’s Under-23 side earlier this week after recovering from an injury suffered last season.

“It was nice, the atmosphere was good, I can imagine if the stadium is full and I am very happy to come back,” Dalot told United’s official website. “It feels good to be back. It was a special night, getting my first minutes after four long months and I am really happy. It is a really special moment for me. I just want to take this opportunity to thank the amazing medical department and the coach, who has believed in me since day one.”

If Mourinho wants a veteran presence, he could opt for Marcos Rojo as the Argentina international has worked his way back into match shape recovering from injuries.

Marouane Fellaini is questionable for the match with a back injury that forced him to withdraw from Belgium’s Nations League matches. The towering midfielder was an influential figure in the win over Burnley in his first start of the season.

One player who will not be available is attacking winger Marcus Rashford, who will serve the first of his three-match ban for his headbutt of Phil Bardsley in the win over Burnley. His absence could be filled by Jesse Lingard, Juan Mata or Anthony Martial as Mourinho prepares for a busy stretch of schedule in which United play five matches across three competitions.

Rashford, though, will be available for United’s Champions League opener against Swiss side Young Boys on Wednesday.

United did the double over Watford last season, including a 4-2 victory in the corresponding fixture. Ashley Young scored twice in a six-minute span of the first half, and Martial made it 3-0 just after the half-hour. Manchester United are 9-0-1 in league matches against the Hornets, with the lone loss a 3-1 defeat at Vicarage Road in 2016.

Per Ladbrokes, Manchester United are solid favourites with 10/11 odds, and Watford will give a 3/1 return if they continue their 100 percent start. The odds of the teams splitting the points are 12/5.

Pereyra’s odds for a goal at any time in the match improve to 7/2, while Lukaku nets a 6/4 return. Sanchez has 9/2 odds to bag his first goal of the season for United, with Paul Pogba and Juan Mata receiving 13/5 odds. Deeney is also listed at 13/5 to beat David De Gea at some point.

Do you know how I know it was a good week of practice for Manchester United? Mourinho was railing about all the questions surrounding Rashford, who isn’t even playing as he serves the first of this three-match ban for his red card against Burnley. In some ways, that win came at the worst time for United since it was clearly their better victory of the two they have.

Replacing Shaw — provided he is not cleared to play — will provide some obvious talking points, more so if Dalot does not make his debut after playing for the Under-23 side, but this is where United must kick on and get on with their season. They cannot afford to lose this game and be nine points behind Liverpool and seven points behind their eternal rivals across town (note: this space is not entirely sold on Chelsea, but a nine-point deficit would be inconvenient) given how the league is again quickly turning into a top 7/bottom 13 league once more.

And all this is not designed to give short shrift to Watford. The Hornets deserve their status as flavour of the month given their start, with Gracia doing excellent work. Watford have a track record of starting fast before fading in recent seasons, and either avoiding or enduring through that difficult stretch is Gracia’s biggest challenge.

Despite their maximum record, the break after rallying past Spurs may have come at the perfect time for Watford because it allowed Gracia to teach as opposed to simply ride the momentum of a big win into the next match. Those lessons will be learned, and while a fifth league win on the trot may be too big an ask, a hard-earned draw feels like the most likely outcome.