Tactics, schemes, set pieces and in-match adjustments will be the order of the day at St James’ Park on Sunday when Rafa Benitez and Newcastle United attempt to put the brakes on the fast start enjoyed by Maurizio Sarri and Chelsea. 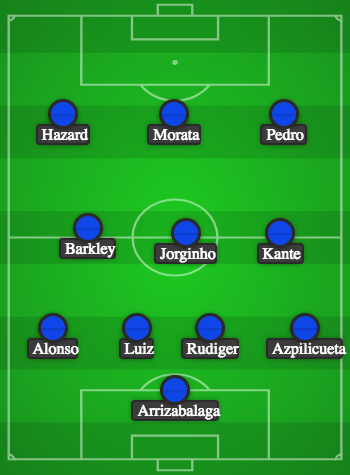 The two managers share a common thread as managers of Serie A side Napoli. Benitez guided the Little Donkeys for two seasons from 2013-15, finishing third and fifth before moving onto a doomed six-month stint at Real Madrid. He resurfaced two months later at Newcastle (0-1-1), whom he could not save from relegation but brought back to the top flight by winning the Championship in 2017.

After a 3-0 rout of Chelsea last May when it was evident Antonio Conte would not be returning to Stamford Bridge, Benitez felt Sarri could thrive if he took the job.

“Sarri to Chelsea? At the beginning it’s not easy but a great manager can adapt to the Premier League,” he told CalcioNapoli24. “In England there is more respect for the role of manager. When I arrived at Liverpool they gave me three years to win something. I had to manage the team and try to win, I was not obliged.

Sarri, a lifer in the lower rungs of Italian calcio, was a surprise selection to follow Benitez at Napoli. The club continued to thrive as they finished no lower than third in Sarri’s three seasons and were the only consistent threat to Juventus’ domestic dominance. Napoli’s 91 points last term were the most of any Serie A side who failed to win the scudetto.

Chelsea (2-0-0) turned to Sarri as their relationship with Conte — another mercurial Italian manager – soured almost immediately after winning the Premier League title in 2017. Sarri became an attractive alternative for owner Roman Abramovich in large part because Sarri does not care much, publicly at least, about the transfer window and coaches who he has on the squad at that moment.

Both men are football obsessives, men who find their greatest joy examining the game at the macro and micro levels. Benitez spent his honeymoon following around AC Milan, and Sarri earned the nickname “Mister 33” because he had 33 plays at the ready for set pieces while coaching Sansovino – a sixth-division team during his tenure in the early 2000s.

For this match, Benitez will be the bigger tinkerer of the two. A crucial change to Newcastle’s lineup is enforced since winger and Chelsea loanee Kenedy cannot play against his parent club.

The Brasil international missed a penalty in Newcastle United’s 0-0 draw at Cardiff City on Aug. 18 that was the last kick of the contest but was also lucky to still be on the pitch to even take the attempt as referee Craig Pawson missed him kick Victor Camarasa.

“A point away from home in a difficult game, with 10 men, is a point gained, but it’s disappointing because we could have had all three in the 95th minute,” left back Paul Dummett told the club’s official website.

“We came for three points and we didn’t get them, but in the circumstances – having 10 men – we’ll take the point. These things happen in football – players miss penalties, players miss chances and today it was us.”

Benitez should have right back DeAndre Yedlin available after he was sidelined last match with a knee injury. Japan international Yoshinori Muto could get his first start with the Magpies to fill Kenedy’s spot, and Salomon Rondon could lead the line at the expense of Joselu. One other possible switch for Benitez would be installing Federico Fernandez for Ciaran Clark in central defence to partner with Jamaal Lascelles.

Isaac Hayden will begin serving a three-match ban for his reckless challenge on Cardiff’s Josh Murphy that resulted in a direct red card.

Sarri could leave his lineup unchanged for a third straight match after taking the maximum six points from the first two. The good and the bad of Sarri’s 4-3-3 formation and decision to shift N’Golo Kante to the right were on display in Chelsea’s 3-2 derby win over Arsenal on Aug. 18.

The Blues tore apart Arsenal’s defence in the first 20 minutes as Pedro and Alvaro Morata scored goals. But after two seasons in which Kante defused so many opposing attacks with well-timed tackles and interceptions, the Gunners showed how to ruthlessly exploit the gaps created when the France international goes forward.

Arsenal equalised before halftime and realistically should have scored twice more in those 45 minutes. Chelsea, however, won after defender Marcos Alonso swept Eden Hazard’s pass by Petr Cech from close range in the 81st minute.

“I think we play good football when we have the ball,” Morata told Chelsea’s official website. “We need to improve on small things but it’s only been one month since we’ve been all together with the manager and I think if we can continue like this we can play against any team in the world.”

Sarri’s temptation to tinker comes in replacing Willian with Hazard on the left wing. Hazard has been building to match fitness since returning from Belgium’s third-place finish at the World Cup and has registered assists in both matches coming off the bench.

Mateo Kovacic, who came over on loan from Real Madrid when the reigning three-time Champions League winners signed keeper Thibaut Courtois, could get his first start as well over Ross Barkley in the midfield.

St James’ Park has been a bogey ground of late for the Pensioners, who have taken one point from their last five visits and been outscored 12-5. Ayoze Perez had a brace in that 3-0 victory in May for Newcastle, scoring both goals in a four-minute span of the second half.

Per Ladbrokes, Chelsea are decided 4/6 favourites, while Newcastle United check in as 21/5 underdogs. The odds of the teams splitting the points are 11/4. Punters appear torn between an outcome in which both teams score (5/6) or one side posting a clean sheet (19/20). For those expecting anti-football, a scoreless draw is listed with 10/1 odds.

Chelsea dominate the board for first goal-scorers as they have the first six options, led by Morata and Olivier Giroud at 4/1. Hazard is a somewhat surprising third at 5/1 given he has yet to start this season. Newcastle strikers Rondon and Joselu are the joint-top options for the hosts at 9/1.

One thing Benitez did very well last season was devise tactics against the top-six sides when playing at home. Newcastle went 3-1-2 in such matches last year, losing only 1-0 to Manchester City, and it can be argued they deserved at least one point from their season-opening 2-1 loss to Tottenham a fortnight ago.

Not having Kenedy available gives Benitez all the incentive he needs to take a defensive stance in this match and stay compact while looking for opportunities to hit on the counter. That may cause some grousing among the Toon Army, especially considering there will be pre-match protests of owner Mike Ashley — something now the norm versus the exception — but they and Benitez know this is the best chance to grab a needed victory here.

Chelsea are still a curious work in progress with Sarri-ball. Arsenal showed what a good counterattacking team can do with a little bit of pace, and Newcastle may be able to exploit such gaps with Muto and Perez. It would not be surprising to see Joselu hold his spot for this match, but Rondon provides an industry that may force David Luiz to have a second thought or two when advancing.

This should be an intriguing chess match of move and countermove given how both Benitez and Sarri love the game within the game. In the end, however, Chelsea’s talent and depth should win out late.