Burnley are in danger of having their Europa League adventure come to an early end in addition to enduring a slow start domestically as they look to get on track Sunday at Craven Cottage versus Fulham. 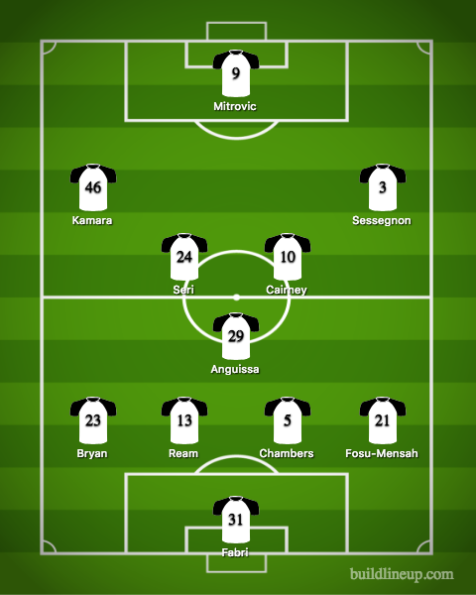 The Clarets (0-1-1) have a challenging task next week at Turf Moor, where they will attempt to overturn a two-goal deficit to reach the group stages of the Europa League after suffering a 3-1 loss at Olympiakos in the first leg of the final qualifying round Thursday.

Chris Wood secured an important away goal from the spot just after the half-hour, but the Greek side scored twice in an 11-minute span of the second half. Burnley manager Sean Dyche was seething after a controversial handball on Ben Gibson resulted in both a penalty for the hosts and the defender’s second yellow card, leaving the Clarets with 10 men for the final half-hour.

“All I keep getting told is respect the referees and about conduct and the scenes I saw at half time around the referee were interesting, from all and sundry,” the gaffer said post-match. “Then things get changed in the second half and you are left scratching your head. Ben gets booked early doors and within a millisecond Kevin (Long) gets booked in the same incident.

“Then, miraculously, it seems to me, one of our players is sent off when he goes to block the ball. I’ve seen it and it hits Ben’s hip first and his hand second and that’s deemed a professional hand ball and he’s sent off. I’ve just seen it back on DVD, but hey ho, you live and learn.”

Gibson is ineligible for next week’s second leg but can play in this match. The loss continued a troubling trend for Burnley in which they started the second half flat. It was the second straight contest they conceded two goals in the first 15 minutes after halftime, something that contributed to their 3-1 loss to Watford at home last Sunday.

Keeper Tom Heaton, seeing his first action of the season after getting the nod over Joe Hart, likely did not do enough to stay between the sticks for this contest. The two will continue to vie for the No. 1 shirt as starter Nick Pope remains sidelined with a shoulder injury suffered in the first leg of the first-round Europa League tie versus Aberdeen.

Dyche also held out some regulars from domestic play. Defender Ben Mee did not make the trip while right back Matt Lowton and central midfielder Ashley Westwood stayed on the bench. Summer signing and striker Matej Vydra was included in the 18 for the first time but also did not see any action.

Fulham (0-0-2) are still looking for their first top-flight win since defeating Norwich City on April 12, 2014, before being relegated. The Cottagers were outclassed by Tottenham Hotspur 3-1 at Wembley on Aug. 18, with Kieran Trippier’s goal on a free kick in the 74th minute snapping a deadlock and Harry Kane adding the insurance marker three minutes later for Spurs.

Aleksander Mitrovic had pulled Fulham level seven minutes after the re-start with a header from close range. The goal capped a sweeping 27-pass movement that showed what Slavisa Jokanovic’s team can be all about going forward, but the defence has yet to fully adjust to the faster tempo and higher quality of life in the Premier League.

“These two games were good tests,” summer signing and midfielder Jean Michael Seri told the club’s official website. “In the second game there were many positives to take, of course there are areas to work on also, but I think there are good elements for us all to build on, and I am not worried at all.”

Fulham’s back line could finally be at full strength as centre back Tim Ream is expected to be available for selection after missing the first two matches with a thigh injury. That could help lessen the burden on Fabri, who has recorded a Premier League-high 16 saves through the Whites’ first two matches.

The 16 saves also highlight the fact opponents are finding open spaces and shooting lanes — 20 of the 36 shots Fulham have conceded have been on target.

If there is one area where the Cottagers need a quick fix, it is seeing the first half through to the whistle. They have allowed goals in the final five minutes before halftime in each of their first two matches.

“I can be encouraged by certain things, but it is clear we need to improve during different parts of the game,” Jokanovic noted. “We were in trouble in the first 45 minutes. We had one great chance, but we didn’t finish it, and then they scored a goal at a bad moment for us.”

This is the first Premier League meeting between the teams since Fulham routed Burnley 3-0 at Craven Cottage on Feb. 9, 2010. The Clarets, however, did the double in the Championship in 2015-16 en route to winning promotion and are 5-2-1 in the last eight across all competitions.

Per Ladbrokes, Fulham are favourites to break through for their first win of the season at 19/20 odds, while Burnley are 3/1 underdogs. The teams splitting the points barely sneaks in between them at 9/4.

The expected result of a 1-1 draw is a slight favourite at 14/5 odds, closely trailed by a Fulham victory and under 2.5 goals (29/10). Punters who think Burnley can scrape out a win while staying under 2.5 goals can get 6/1 odds.

For first goal-scorers, Mitrovic leads the line at 7/2, followed by Burnley’s Wood at 9/2. Fulham sport the next two options as Kamara and Luciano Vietto are 11/2 odds, just ahead of Ashley Barnes at 6/1. Mitrovic has 7/5 odds to score his 14th goal in 20 matches with the Whites, and Wood is a 17/10 any-time scorer for the Clarets.

There is going to be an edge to this game as neither team wants to be winless after three league matches, more so for Fulham as they have mid-week duties in the Carabao Cup. Burnley also need to right themselves quickly or will be facing a fourth loss on the spin as they try to overturn that 1-3 deficit against Olympiakos to get to the Europa League group stages.

Both teams have problem spots — Fulham tend to shut off before halftime and Burnley do not seem to come out of the blocks well after it. The Clarets also play a similar well-drilled defensive style that compares to Crystal Palace, and Fulham did not fare all that well breaking down the Eagles.

While Dyche has said all the right things after Burnley’s two losses, it is also clear he feels aggrieved by the officiating in both matches. That’s his right, but it also serves as cover for an offence that had only one shot on target in Greece — Wood’s successful penalty — and put only three on frame against Watford. That has to improve.

Fulham have had their adjustment period to life in the Premier League, and the biggest thing they need to do is to extend moments of positive play to minutes and then extend those minutes to stretches. It happened in pockets against Tottenham, and while it is believable there may be a few more instances versus Burnley, a gritty draw seems the most likely outcome at Craven Cottage.