(Writer’s Note: This is the 11th of what will hopefully be 20 team previews in 20 days. Or at the very least, all 20 teams prior to the 2018-19 Premier League’s season-opener between Manchester United and Leicester City on August 10. Links to previous teams can be found at the bottom of the page)

Life after promotion started roughly for Newcastle United with losses to Spurs and Huddersfield Town before bouncing back with three wins on the trot. The Magpies reached their high-water mark of seventh after a 1-0 victory over Crystal Palace on Oct. 21, but it went south after that with eight losses in nine matches.

Newcastle righted itself to a degree with two wins and seven of 12 points during the holiday fixtures and continued to tread water with three draws and a loss in the next four contests. But with the arrival of keeper Martin Dubravka from Sparta Prague, the Magpies’ fortunes changed for the better.

His Toon debut came at home against Manchester United, and Dubravka made three saves in a 1-0 victory. That kicked off a spurt of five wins in seven matches that lifted Newcastle above the relegation fray, and despite a four-match skid, the Magpies did not move out of 10th place despite the successive losses.

For the second straight Premier League finale, Newcastle throttled a London-based opponent, thrashing Chelsea 3-0 to secure its first top-half finish in the top flight since also placing 10th in 2014. 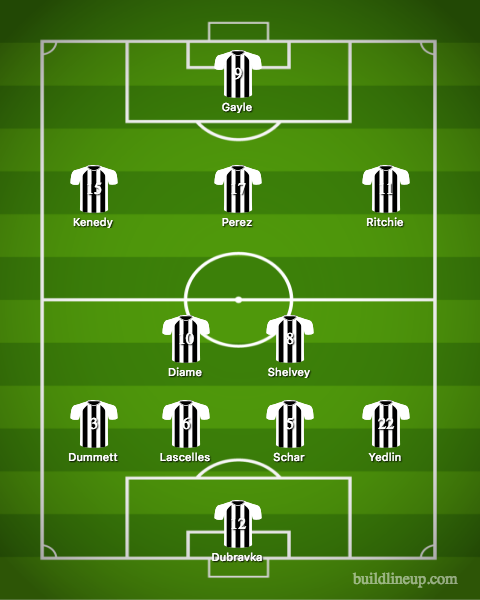 Though Newcastle technically made four signings, two of them are holdovers who are expected to retain their starting spots in Dubravka and Kenedy. The battle between newcomer Fabian Schar and incumbent Florian Lejeune to partner with Jamaal Lascelles in central defense could be the most intriguing one of Newcastle’s preseason positional battles.

Midfielder Jonjo Shelvey could finally be ready to take the next step into stardom after figuring out what Benitez wanted of him while also learning to balance his play on both sides of the ball for most of the second half of the season. He nearly played his way into consideration for a spot on England’s World Cup squad, and knowing he’s on Gareth Southgate’s radar for the national team could kick him into a higher gear.

Newcomer Yoshiniri Muto could challenge Matt Ritchie for a spot on the right flank opposite Kenedy, and Ayoze Perez continues to be an underrated goal-scorer for the Magpies after tallying a team-high 10 in all competitions in 2017-18. Newcastle, though, will need more from Dwight Gayle and Joselu, who combined to match Perez’s haul at the advanced striker position.

THE NEW GUYS AND THE GONE GUYS

It has been an interesting summer for Newcastle, which sold off Mikel Merino to Real Sociedad for a reported £10 million and received another £8 million for Chancel Mbemba’s departure for Porto. The Magpies were able to make Dubravka’s move from Sparta Prague permanent and shrewdly acquired Schar — a key component of a Switzerland back line that reached the round of 16 at the World Cup — for a cut rate after Deportivo La Coruna was relegated.

Newcastle added some pace with the signing of Japan international and winger Muto for nearly £10 million and secured the services of Chelsea winger Kenedy for a second straight season. They also added some important midfield depth with veteran Sung-Yueng Ki on a free transfer after Swansea City was relegated.

While it has not been finalised at the time of this writing in part because he played for Serbia at the World Cup, striker Aleksandar Mitrovic is expected to make a permanent move to Fulham in the neighborhood of £20 million after leading the Cottagers’ charge to promotion following his loan out in the January window.

THE GUY WORTH SEEING

Shelvey stands out in the midfield with his bald head, but he stood out for the right reasons for most of the second half of the season for Newcastle. It was a stark contrast to the opening match when he needlessly stamped Spurs playmaker Dele Alli and earned a straight red card, putting the Magpies behind the eight ball and absorbing a loss.

Entering the prime of his career at 26, Shelvey appears to have found the missing part of his mental game, which can be attributed partly to Benitez’s incessant teachings and meetings with a sports psychologist. After picking up two red cards in his first 13 matches, Shelvey did not get booked for even a yellow in his final 15 in all competitions.

If he continues his progress into a standout box-to-box destroyer in addition to his playmaking skills, Newcastle will be that much more difficult to play.

Oddsmakers have put Newcastle in the middle of the pack with regards to relegation, listing the Toons at 5-1 odds, which is eighth-shortest. They are also tied with Crystal Palace for eighth for a bottom-half finish at 4/11 but are also ninth at 11/5 odds to finish in the top 10.

Newcastle is a 20/1 long shot to crack the top six and 66/1 to claim a Champions League berth with a top-four finish.

Watching Benitez try direct Newcastle United in spite of Ashley understandably has all of Toon Army on edge for a second straight Premier League season. It is almost like watching Lucy pull the ball out from under Charlie Brown the way Ashley promises funds for the transfer window that never fully materialise.

And let’s get this clear: most Toon supporters ADORE Benitez because they feel, he shares their same vision in making Newcastle United something special similar to the Premier League’s first seasons and when Alan Shearer was at the peak of his powers. Equally important is that adoration is reciprocated by Benitez, who is happy with almost every aspect of life in the North East aside from Ashley acting like Scrooge McDuck.

Benitez essentially took the same team who won the Championship in 2017 to a top-half finish in the Premier League. In a league that had multiple standout coaching performances, with Pep Guardiola guiding Manchester City to 100 points and Roy Hodgson overcoming an 0-0-7 start with a minus-17 goal difference to lead Crystal Palace to 11th place behind the Magpies on goal difference, Benitez’s cunning and tactical acumen to finish 10th is also high on the list of coaching marvels in 2017-18.

He recognized matches Newcastle United could not win and set his side up to play not to lose. Call it anti-football if you want, but there is a certain amount of ugly beauty in watching his players buy in for that 0-0 or 1-0 scoreline. Dubravka’s stellar performances shortly after his arrival were a key reason the Magpies were able to walk that fine line. By season’s end, they got such results against top-six sides with wins over Manchester United, Arsenal and Chelsea.

While Ashley did not open the purse strings until late in the window, the additions of Ki, Schar and Muto are all targeted signings that addressed a need or filled a void for Newcastle. The one area the Magpies were left wanting was to find another striker to at least challenge Gayle and Joselu since they are all but certain to let Mitrovic walk to Fulham to cover the outlay for Schar and Muto.

While it may not take the form of flowing football the way City or Liverpool play, there is an aesthetic quality to the buy-in Benitez’s players have in trying to make their coach’s strategy come to life. The opening four matches do the Magpies no favours, but if they can escape without losses in their first two home contests, the game at champion Manchester City could be a harmless write-off with a chance to steal a point.

Newcastle United are still closer to the bottom five than the top six, but if Dubravka can maintain his level of play for a full season in addition to Benitez’s ability to steal points from big clubs, there’s every reason to believe another top-half finish is in the offering.