(Writer’s Note: This is the second of what will hopefully be 20 team previews in 20 days. Or at the very least, all 20 teams prior to the 2018-19 Premier League’s season-opener between Manchester United and Leicester City on Aug. 10. Links to previous teams are at the bottom of the page)

Cardiff City hit the ground running last season, winning its first five matches and never slipped below fourth in the Championship table throughout the 46-match campaign. The Bluebirds had one hiccup during the season, a four-match skid during the congested holiday fixtures but claimed 10 points in their final five matches to secure direct promotion to the Premier League for just the second time in club history.

Cardiff’s promotion was a English football record eighth for manager Neil Warnock, himself no stranger to the Premier League over a lengthy 35-year coaching career. This will be his first season in the top flight since getting sacked by Crystal Palace during the 2014-15 season.

The Bluebirds had five players with at least seven goals in league play, paced by right back Callum Peterson’s 10. Junior Hoilett had top honors overall with 11, scoring nine in Championship play and another two in FA Cup action. Despite finishing runner-up to Wolverhampton, Cardiff City did not place anyone on the EFL’s Championship Team of the Season. 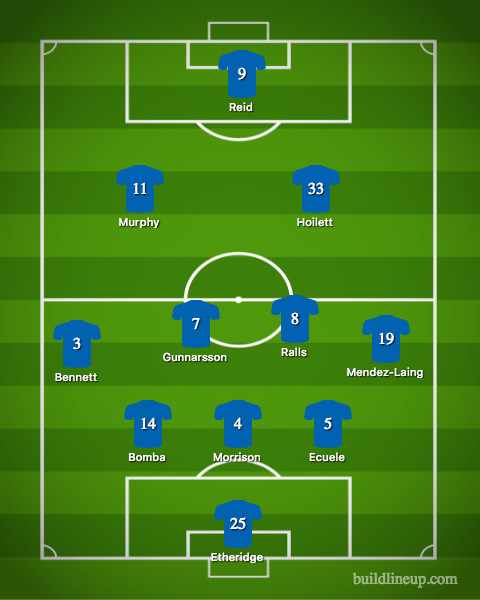 While Warnock was using a 4-2-3-1 set-up at points, it may be more prudent to go with a three-man backline that can turn into five when the opponent has too much quality to deal. Hoilett will likely switch sides and line up on the right to make way for new signing Josh Murphy, and both will be trying to provide service for Bobby Reid, who did make the EFL Championship Team of the Year while playing for Norwich City.

The good news for the Bluebirds is their central defending trio of talisman Sol Bomba, Sean Morrison and Bruno Ecuele were a durable bunch as all three started at least 35 league matches in 2017-18. Bennett re-signed with the team through 2021 earlier this month and central midfielder Aron Gunnarsson signed a one-year deal after captaining Iceland in its first World Cup appearance.

THE NEW GUYS AND THE GONE GUYS

Cardiff City’s big splash came up front as it shelled out a reported £21 million in transfer fees for Murphy — the twin brother of Newcastle United winger Jacob Murphy — and Reid. Murphy scored 19 goals for the Canaries last season while Reid had a breakout season at Bristol City and also bagged 19 goals to go with seven assists. The 25-year-old had scored just five times in 58 league matches over the previous two campaigns for his hometown team.

The Bluebirds also added depth at left back behind Bennett, signing Greg Cunningham from Preston North end. Keeper Alex Smithies, brought over from Queens Park Rangers, will be behind Neil Etheridge on the pecking order for the No. 1 shirt. Warnock is hoping to bring back Marko Grujic for a second loan from Liverpool, but that deal may not be finalized until closer to the start of the season should it happen.

THE GUY WORTH SEEING

Warnock seems most excited about bringing Murphy on board, telling the team’s official website, “Josh is a player I’ve watched for a number of years now and he’s always excited me when he runs with the ball. I think he’s at the right age now with his best still to come. He can play an instrumental part in helping us to stay in the Premier League and I know he’s looking forward to the challenge.”

Per Ladbrokes, Cardiff City is the odds-on favorite to be relegated at season’s end with 4/5 odds and also to finish last at 2/1. The Bluebirds are also considered a lock to finish in the bottom half of the table at 1/50 odds and 12/1 longshots to finish 10th or better.

It will take much graft and craft from the Bluebirds and Warnock to have any realistic shot of staying in the top flight and not going one-and-done in the Premier League like they did in finishing last in the 2013-14 season.

That said, there are some pieces in place for Cardiff City, starting with its central defending trio. The 39 goals the Blackbirds shipped last season matched Wolverhampton for the joint-lowest in the Championship, and the hope is Gunnarsson can stay healthy for a full season after appearing in only 20 matches in 2017-18.

Still, the Bluebirds’ fortunes likely rest with how well Reid and Murphy perform up front and Etheridge’s shot-stopping abilities between the sticks. Hoilett also has Premier League experience from previous stops at Blackburn Rovers and QPR, and Warnock will be counting on him to provide leadership for the kiddie corps up front.

Etheridge, who has dual citizenship, helped the Philippines qualify for the Asian Cup for the first time in team history also made seven appearances for the national team in World Cup qualifying. He had 19 clean sheets for Cardiff City while appearing in all but one of its 46 league matches.

Cardiff City will be the only Wales side in the Premier League this season since Swansea was relegated, and while the 69-year-old Warnock probably still has some tricks up his sleeve for slowing down the big boys in the Premier League, it does not seem he has enough at his disposal from preventing a quick return to the Championship. That closing schedule with both Liverpool and Manchester United among their final four matches does the Bluebirds no favours either.