England may have lost the battle to win Group G, but it hopes being placed in the more navigable half of the knockout round bracket will help it win the World Cup war for the first time since 1966 as it faces Colombia in the round of 16 on Tuesday in Moscow.

While the Three Lions did not go about trying to lose their group finale against Belgium, which was for all intents and purposes a dead rubber since both teams had already secured passage, a lineup with eight changes to it did not set the world alight in a bid to sweep Group H.

Facing a similarly fashioned B squad from Belgium, England failed to create many quality scoring chances as a moment of brilliance from Adnan Januzaj, a player the England FA tried to woo in terms of citizenship for its senior team, dealt the Three Lions a 1-0 defeat that consigned them to the runner-up spot.

Not that it was a horrible outcome. On the surface, should England progress from this tricky tie, only unfancied Sweden or Switzerland would stand between it and a first World Cup semifinal since 1990. Compare that to Belgium, which has arguably the easiest match in the round of 16 against Japan before a potential murderers’ row of Brazil, Mexico, France and Uruguay between itself and the final.

The other truth of the loss to Belgium showed just how much Gareth Southgate’s squad picks itself. In fact, one can make the argument he now knows his top 15 players as Marcus Rashford, teenager Trent Arnold-Alexander, Ruben Loftus-Cheek and Jamie Vardy are his top options off the bench.

While Loftus-Cheek has been serviceable in the place of injured Dele Alli, there is a certain amount of creativity lacking in the middle without the dynamic Tottenham Hotspur midfielder.

After watching the Belgium match from the bench, Golden Boot frontrunner Harry Kane looks to to add to his haul of five goals. Defender John Stones has added two as England has been lethal on dead-ball pieces in Russia, scoring five of its eight goals via corners and penalties.

Colombia, looking to return to the quarterfinals for the second consecutive World Cup, grinded its way to the top of Group H after losing its opening match to Japan in which it played a man down for all but three minutes. Los Cafeteros rebounded by steamrolling Poland and then showed their mettle by overcoming the loss of star James Rodriguez to defeat Senegal.

Rodriuguez’s calf will be the subject of international intrigue as it has limited the Bayern Munich attacking midfielder to 152 minutes in Russia as he came off the bench for the final 30 minutes in the loss to Japan, played the full 90 versus Poland and then was forced off when he aggravated the injury after a half-hour against Senegal. Even in that short span, Rodriguez assisted on two of Colombia’s five goals, including a perfectly weighted curling ball to Juan Cuadrado as he completed the scoring versus Poland.

While the Colombian federation released a statement saying an MRI revealed only swelling but no tear in the muscle, Rodriguez did not practice with the team Friday or Saturday, and there is justifiable worry about how effective he can be and how long he would be able to play if available.

Los Cafeteros’ trip to the final eight in Brazil four years ago, where they lost to the host in controversial fashion, is their best showing in five prior World Cup appearances. 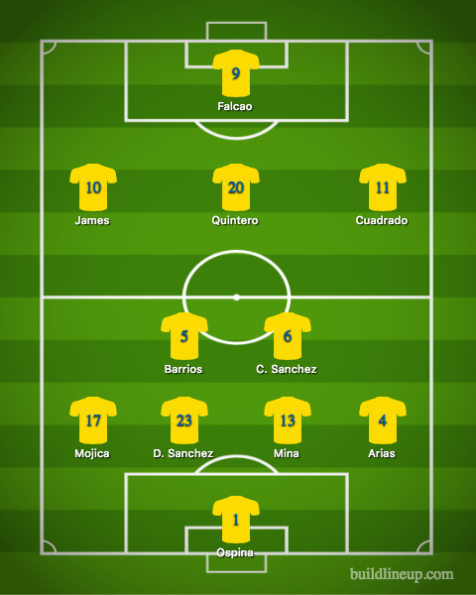 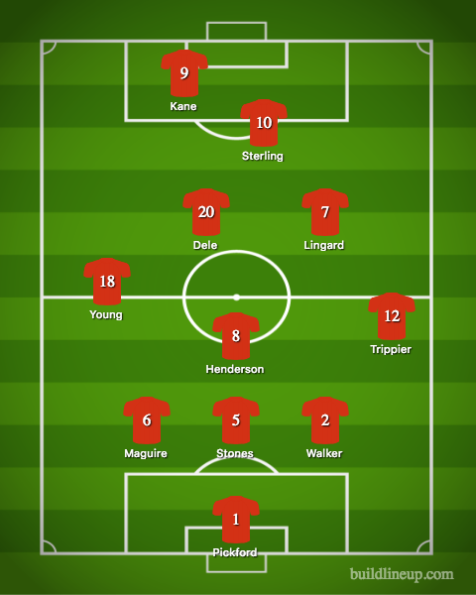 Colombia is expected to stick to its 4-2-3-1 formation. Even if he is not 100 percent, it is difficult to imagine a scenario in which Rodriguez does not play given the stakes and his competitiveness. If “Big Game James” does not start, Jose Izquerido would be the most viable alternative given he got the call in Los Cafeteros’ opener versus Japan.

Midfielder Abel Aguilar is questionable with an adductor injury that sidelined him from the group finale versus Senegal. Rodriguez, midfielder Wilmar Barrios and left back Johan Mojica are all on yellow cards for Colombia.

England will press on in its 3-5-2 set-up, and with Alli healthy, he is restored to the midfield for Loftus-Cheek. The other seven changes Southgate rang in for the Belgium match will be rung out as the usual backline of Stones flanked by Harry Maguire and Kyle Walker will protect Jordan Pickford, with wide backs Ashley Young and Kieran Trippier bombing forward when available.

Kane leads the line with Raheem Sterling underneath, while Jesse Lingard serves as the link to midfielder Jordan Henderson and Alli. Loftus-Cheek and Walker are the only players sitting on a yellow for the Three Lions.

A towering figure on the back line at 6-foot-5, Mina has buried a pair of headers for Colombia’s match-winning goals, including one off a corner by Juan Quintero for the only goal against Senegal. Primarily a reserve for Barcelona after his January arrival from Palmerias, Mina has put his practice time to good use as has five goals in 14 international appearances for Los Cafeteros.

While Kane has flourished in his first World Cup, Sterling has yet to take off in his second. The speedy second striker has yet to find the international success that lifted his game at Manchester City this past season but does have an assist in his two matches in Russia. England will need him to provide a counterweight through the middle against Colombia’s speed on the wings.

Darren Anderton opened the scoring with a sharp–angled volley in the penalty area and David Beckham followed with a world-class free kick as England grabbed control of the match in the first-half hour in Lens as it advanced to the knockout round with a convincing victory.

The Three Lions are unbeaten in five all-time matches (3-2-0) versus Colombia, with the most recent contest a 3-2 victory in New York in 2005 when Michael Owen recorded a hat trick.

Per Ladbrokes, Colombia is a slim favorite at 29/10 odds, with England close at 21/10. The odds of the match going to penalties after a draw and further fraying the nerves of Three Lions supporters are currently 2/1.

Kane is a clear front-runner to score the first goal of the match at 3/1, with Vardy 9/2. Falcao is Colombia’s top option at 11/2 odds, while Rodriguez has notably longer odds to make it 1-0 at 8/1.

One of the undercurrents of this match is that two of Colombia’s key outfield players, Cuadrado and striker Radamel Falcao, were Premier League flameouts — Cuadrado seeing just 13 matches at Chelsea while Falcao struggled on loans with both Chelsea and Manchester United before finding his niche at Monaco. They played exactly 11 minutes together for Chelsea in a loss to Manchester City in 2015, and 10 days later Cuadrado was shipped to Turin, where he has thrived and reached a Champions League final.

And the 32-year-old Falcao has plenty of urgency since this will be his lone World Cup with Los Cafeteros as a torn ACL cruelly ended his dream to be on the 2014 squad. He is joint-leader in shots with Quintero (5) and has a team-best three shots on goal as he looks to add to his record haul of 30 goals with Colombia.

A third, David Ospina, has been a much-criticized understudy to Petr Cech at Arsenal, never getting both gloves on the No. 1 jersey since arriving in north London in 2014 from Nice. While he has recorded back-to-back clean sheets since the opening-match disaster against Japan, there are still times he provides anxieties on crosses and corners for Colombia.

Since Southgate opted to use the B squad against Belgium, there is little to take away from what England is all about, an argument that can be extended throughout its group play considering the gulf in class between the Three Lions and both Tunisia and Panama.

Everyone is well-rested, everyone is available now that Alli has declared himself healthy, but is this team ready to step up against a higher caliber of competition? The first team has hardly suffered in Russia, with one goal conceded on a naive penalty and the other in garbage time after scoring six.

Pickford had some anxious moments versus Belgium, though there wasn’t much he could do about Januzaj’s strike. This will be the first time England’s three-man backline will be put to the test, and how the Everton keeper responds will go a long way in determing if the Three Lions make their first World Cup quarterfinals since 2006.

The adage is that young teams find ways to lose, and with Colombia sporting four players — Ospina, Rodriguez, Cuadrado and Carlos Sanchez — who have precious knockout round experience, the hedge here is Los Cafeteros find a way to edge out a game but naive England side.