They could be group stage flameouts or darkhorse semifinalists at this World Cup, and both Croatia and Nigeria look to begin making that distinction Saturday in their Group D opener in Kaliningrad.

Croatia is back in the World Cup for the second straight time and has missed only one tournament in the six World Cups they have been eligible for since being allowed to particiapte in 1998. The Vatreni, however, have not escaped group play since that initial appearance 20 years ago when Davor Suker led them to a third-place finish in France.

Nigeria is making its third consecutive World Cup appearance and sixth in the last seven tournaments. The Super Eagles made the knockout round in Brazil before being outclassed by France in the round of 16, and that remains the high-water mark for Africa’s most populous nation after also doing so in 1994 and 1998.

While Croatia will rely on the veteran poise of midfielders Luka Modric and Ivan Rakitic, Nigeria has plenty of youth in its attack, led by Arsenal’s Alex Iwobi and Ahmed Musa, who joined CSKA Moscow after failing to stick with Leicester City, where compatriot Kelechi Iheanacho was ahead of him in the pecking order.

For the second straight World Cup, Croatia qualified via the playoff route. After topping Iceland in 2014, the Vatreni finished runners-up to them this time around in a group that also featured Turkey and Ukraine. The failure to win the group cost Ante Cacic his job, and Zlatko Dalic took over for the final two group matches after turning UAE club Al-Ain into a regional power in Asia.

Croatia claimed four points to finish second and made quick work of Greece under Dalic, winning the first leg at home 4-1 to cruise to qualification, but it has been uneven in its four friendlies this year, losing to Peru and Brazil while defeating Mexico and Senegal.

Nigeria emerged from arguably the most difficult qualifying group in Africa, comfortably winning a four-team round-robin with Zambia and 2014 World Cup participants Cameroon and Algeria. The Super Eagles did have to overcome a 3-0 forfeit loss to Algeria in group play when it was determined Shehu Abdullahi did not serve a one-match ban for yellow card accumulation but still won the group by five points.

The Super Eagles have struggled in the buildup to the World Cup, which started with a 4-0 pasting by Morocco in the African Cup of Nations final in February. They went 1-1-4 in six friendlies, beating only Poland while suffering losses to Serbia, England and the Czech Republic. 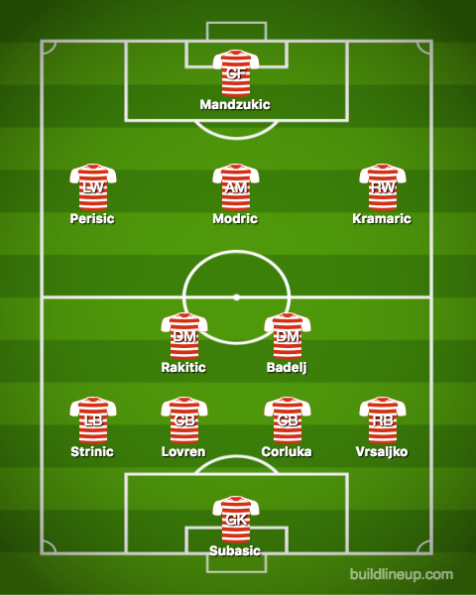 The teams will mirror each other with 4-2-3-1 formations. There is quality across Croatia’s backline, featuring Liverpool’s Dejan Lovren and Lokomotiv’s Verdun Corluka in central defense. Sime Vrsaljko should be able to push forward from right back, and Rakitic will be a force in the defensive midfield.

The Super Eagles will rely on talisman Jon Mikel Obi to control the midfield while relying on the pace of Iwobi and nous of Moses. Odion Ighalo, who left Watford for Chinese side Changchun Yatai in the 2017 January transfer window, is expected to get first crack at striker while Musa and Iheanacho are waiting in the wings. Mikel is Nigeria’s most-capped player with 85 appearances, and despite being only 25, Musa is second with 72.

He is not flashy, he is not quick, but Modric can quietly dominate a match with his passing and vision. The most recent example of that came with Real Madrid in the Champions League final, and he also can pop up for the occasional goal, evidenced in the first-leg win over Greece in the World Cup playoff.

Iwobi still looks like a man without a position at times for Arsenal, but his pace on the right side will be something Croatia cannot afford to underestimate. Iwobi scored a pair of goals in Nigeria’s qualifying route, and the 22-year-old has five goals in 19 international appearances. Given the uncertainty around Arsenal’s makeover with new coach Unai Emery, Iwobi could use the World Cup as a springboard to a new destination.

Nigeria midfielder Joel Obi is reportedly being pursued by Crystal Palace, with both Benfica and Porto in the mix. On the Croatian side, Vrsaljko has piqued the curiosity of both Manchester United and Napoli, and Perisic has been linked with making a move from Inter Milan to a potential landing spot with Spurs.

Per Ladbrokes, Croatia are heavy favorites with 8-11 odds compared to Nigeria being listed at 21-5. The odds of a draw are 12-5. For opening goal-scorers, Mandzukic is the front-runner at 4-1 and teammate Nikola Kalinic is second at 9-2. Perisic is given 6-1 odds to give the Vatreni a 1-0 advantage, while Iheanacho is Nigeria’s top option at 13-2, followed by Ighalo at 7-1.

In cases like this, experience usually triumphs over youth. Or as the old adage goes, “Young teams find ways to lose.” Nigeria has not looked terribly impressive under Gernot Rhor, who is coaching his fourth African country this decade after stops at Gabon, Niger and Burkina Faso.

There will be a lot of pressure on Mikel to make good decisions in the midfield, and Ighalo is also going to have his hands full in the final third against what is a sneaky good back line. If Lovren shows the same form he had in the Champions League final with Liverpool, Croatia will be in good shape defensively.

Modric will be the fulcrum for this match, looking for creases in the back four while taking advantage of what will likely be an eager and aggressive Nigeria side. If the Vatreni can get set pieces, they could be quite dangerous in addition to using Mandzukic as a target forward.

Expect Croatia to test Uzoho early from distance to see what kind of hands the Super Eagles teenager has and then look for Modric to pull apart Nigeria’s defense. It may not be the most aesthetically pleasing match, but the Vatreni should get off to a positive start with a 3-1 win.