Tabbed as one of the pre-World Cup favorites, a vastly talented France side begin its quest to add a second star above the crest Saturday when it faces Australia in the opener for these Group C teams in Kazan.

Les Bleus, who finished runners-up as hosts of the 2016 European Championship, are stacked with talent at every position a generation after lifting the Jules Rimet trophy on home soil in 1998. Coach Didier Deschamps is spoiled with options in the front six with Paul Pogba, Antoine Griezmann, Kylian Mbappe and Olivier Giroud, Thomas Lemar and Ousmane Dembele.

How Deschamps, himself a member of that 1998 squad, mixes and matches his personnel is yet to be determined, but he does not lack for options going forward to cover some of the inconsistencies in defense, where Hugo Lloris has occasionally struggled between the sticks.

Les Bleus are making their sixth consecutive World Cup appearance after topping Group A in UEFA qualifying, finishing four points clear of Sweden. France conceded just six goals in its 10 qualifying matches, but the offense struggled at points in qualifying, scoring 18 goals and was held to a scoreless draw by Luxembourg.

France reached the quarterfinals in Brazil, losing to eventual champion Germany, and has alternated deep runs with group-play flameouts in its previous five appearances. If that pattern holds, then Les Bleus would be one of the biggest disappointments in Russia since they finished 28th in 2002 as defending champions and 29th in South Africa in 2010, when they were best remembered for a player revolt under Raymond Domenech.

Australia took the long road to extend its streak of World Cup appearances to four. The Socceroos finished third in Group B in qualifying in Asia after direct qualification the previous two tries and were relegated to a playoff. They advanced past Syria in extra time 3-2 on aggregate over two legs to qualify for the intercontinental playoff and defeated Honduras 3-1 on aggregate to claim their spot in the 32-nation field.

It is the fifth overall World Cup appearance for Australia, which has reached the knockout round only in 2006. The Socceroos finished last in Group B in Brazil four years ago, losing to Chile, the Netherlands and Spain by a combined 9-3 scoreline and were the third-worst team overall. 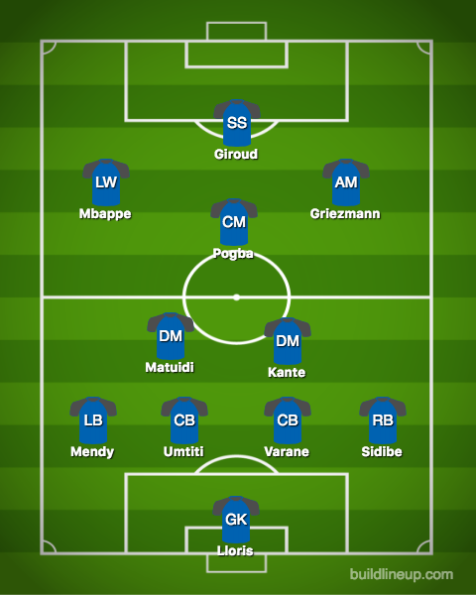 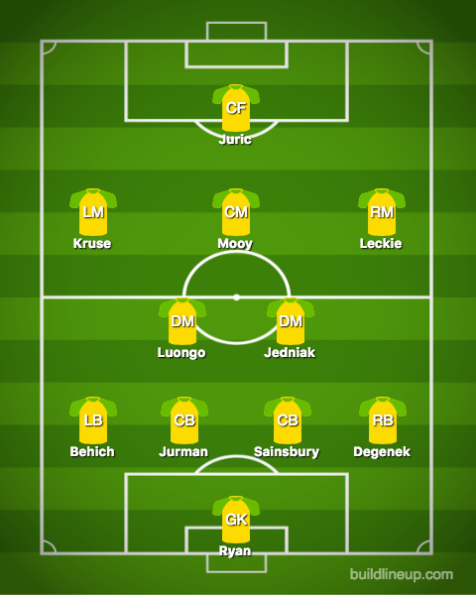 While Deschamps experimented with a 4-2-2-2 formation at times, having Pogba pulling the strings in the midfield means France will likely opt for a 4-2-3-1 set-up. Olivier Giroud will serve as a target forward, with both Griezmann and Mbappe roaming underneath in support. Left back Benjamin Mendy, who missed most of the club season with Manchester City due to a torn ACL, is expected to provide support on the left flank.

Lloris is two caps shy of 100 for Les Bleus as he makes his third World Cup appearance while Giroud (74), Blaise Matuidi (67), Pogba (54) and Griezmann (54) have all cleared a half-century in international appearances.

Australia also is expected to use a 4-2-3-1 set-up under Bert van Marwijk, who favors a more balanced approach than the all-out attacking style of predecessor Ange Postecoglou. The Socceroos had a pair of players help their club survive promotion in the English Premier League this past season with Mathew Ryan backstopping Brighton and Hove Albion and Aaron Mooy pulling the strings in Huddersfield Town’s midfield.

All-time leading goal-scorer Gary Cahill is the only centurion on the side with 106 appearances and will match goalkeeper Mark Schwarzer for the most in Australia history if he plays in all three group games. Cahill is making his fourth World Cup appearance and has scored five goals in his previous three tournaments.

While France has all sorts of attacking options, Kante is the player who turns defense into offense. The tireless Chelsea midfielder is a one-man wave of destruction in the midfield, breaking up passes and making timely tackles to help Les Bleus quickly regain and recycle possession.

Mooy was a primary driver in keeping Huddersfield Town in the Premier League for a second season. He had four goals and three assists while starting all but four games for the Terries this season and also has five international goals to his credit. His ability to hold possession will be vital for Australia to withstand what will be waves of pressure from France.

Griezmann put the speculation around his future to rest Thursday when he announced he will stay with Atletico Madrid after resisting overtures from Barcelona. Monaco winger Thomas Lemar is again being courted by top-tier European clubs after a deal with Arsenal last season fell through, and after an uneven season at Manchester United, there is talk Pogba may want to return to Juventus.

Per Ladbrokes, France is a heavy 1-4 favorite, with Australia decided underdogs with a 10-1 return. The odds of the teams ending level are 5-1. Griezmann and Giroud are joint-leaders for the first goal of the match at 16-5, followed by Mbappe (7-2) and Nabil Fekir (9-2). Ten French players are listed before Tomi Juric and Jamie Maclaren appear as the top Australian options at 11-1.

There has been some hand-wringing about the French side at times, including their send-off in which they dominated possession and play against the United States in Lyon but only emerged with a 1-1 draw in which Mbappe scored 12 minutes from time to level the score.

While Lloris is a world-class keeper, he is prone to the fatal errors that separate good clubs from great clubs, and the goal he conceded to the near post in that friendly against the U.S. was another such example on top of the gaffes he has made for both club and country.

Australia righted itself in its World Cup run-up with wins over the Czech Republic and Hungary, easing some of the concerns that arose in March following a 4-1 humbling in Norway and scoreless draw against Colombia in London. The Socceroos must find a way to crowd out France from the final third, especially since Griezmann is one of the more astute players in terms of moving off the ball to find space.

The sooner Les Bleus score in this game, the quicker their confidence will come. This is a vibrant France side that is among the world’s best when on its game. It may take a half to get settled, but look for Deschamps side to emerge with a 3-0 victory.